5 Ways Vertical Farms Are Changing the Way We Grow Food 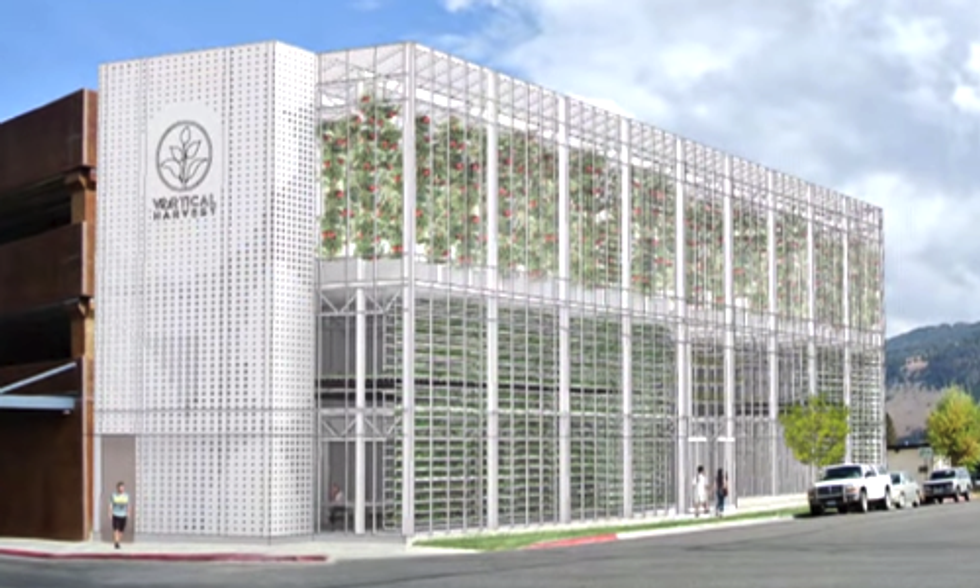 No soil? No problem. From Japan to Jackson, Wyoming, plucking fresh lettuce is as easy as looking up. Vertical farms have been sprouting around the world, growing crops in places where traditional agriculture would have been impossible.

Vertical farms are multiple stories, often have a hydroponic system and some contain artificial lights to mimic the sun. These green hubs are attractive in a variety of ways since food can be produced with less water (since it just recirculates), creates less waste and takes up less space than traditional farming, ultimately leaving a smaller footprint on the environment.

Additionally, the United Nations projects that the world's population will reach 9.6 billion people by 2050, 86 percent of whom will live in cities. For swelling cities, these urban farms give city dwellers greater access to fresh, nutritious food-year round, reducing the distance it has to travel to get to forks. Here are five more reaons why the sky's the limit with vertical farms.

1. Vertical farms can defy any weather: In perpetually wintry Jackson, Wyoming, residents will soon be able to find fresh tomatoes, lettuce and other produce that's not hauled in by delivery trucks. The Vertical Harvest farm is a three-story 13,500 square foot hydroponic greenhouse that will sit on a mere 30 by 150-foot plot adjacent to a parking lot. Utilizing both natural and artificial lighting (especially since the area is blanketed in snow most of the year), three stories of plant trays will revolve inside the building as well as the ceiling in a carousel-like system to maximize light exposure. The company aims to supply 100,000 pounds of year-round produce that's pesticide-free, and will use 90 percent less water than conventional farming because it recycles its water.

Construction of the $3.7 million greenhouse kicked off last November and has already pre sold crops to restaurants, grocery stores and a hospital. In the video below, E/Ye Design architects and Vertical Harvest co-founders Penny McBride and Nona Yehia talk about their innovative building and their mission to hire adults with developmental disabilities to spur local employment.

2. Vertical farms are a great response to climate change: Urban farming has been touted by many as a solution to increasingly extreme weather caused by warmer global temperatures. In very parched California, the Ouroboros Farms in Pescadero employs an unusual group of farmers: Catfish. The farm uses an "aquaponics" system, where 800 catfish swim and dine on organic feed, and as they create waste, the crops above suck up this nitrogen-rich fertilizer. All this means no soil, pesticides or other toxins are required for the stunning variety of vegetables that are produced at the farm, from spicy greens to root vegetables. In case you're wondering, nothing goes to waste; these fish are also sold as food. The farm also saves 90 percent less water than traditional farming.

"I honestly believe [aquaponics] is the evolution of farming," Ken Armstrong, the founder of Ouroboros Farms, said in the video below, "because of its ability to grow faster and more densely with fewer resources it will be the methodology of growing in the future."

3. Vertical farms adapt to disaster: We previously featured Japanese plant physiologist Shigeharu Shimamura, who converted an abandoned, semiconductor factory into the world’s biggest indoor farm, Mirai. Shimamura built the farm in 2011 in response to the food shortages caused by the Tohoku earthquake and tsunami that devastated Japan, and sparked the Fukushima nuclear disaster which irradiated much of the region's farmland.

At 25,000 square feet, the farm can yield up to 10,000 heads of lettuce a day. That’s 100 times more per square foot than traditional methods, and uses 99 percent less water usage than outdoor fields.

A press release said that the building is powered by special General Electric LEDs that “generate light in wavelengths adapted to plant growth. While reducing electric power consumption by 40 percent compared to fluorescent lighting, the facility has succeeded in increasing harvest yields by 50 percent,” and meant that Mirai was able to offset the cost of pricy LEDs. Watch how it all works:

4. Vertical farms are becoming more advanced: It's only the beginning for vertical farms in terms of technology. At the New Buffalo, Michigan branch of Green Spirit Farms, some plants grow under pink-tinted LED lights which "provide the correct blue and red wavelengths for photosynthesis," according to Harbor Country News. It's so efficient, the farm can currently grow 10 tons of lettuce in only 500 square feet of space. Green Spirit Farms president Milan Kluko also told New Scientist that he and his colleagues are developing a smartphone or tablet app that can adjust nutrient levels or soil pH balance, or sound an alarm when a water pump is malfunctioning, for example. "So if I'm over in London, where we're looking for a future vertical farm site to serve restaurants, I'll still be able to adjust the process in Michigan or Pennsylvania," he said.

Farm Manager Mike Kennedy making sure our fresh & local veggies (kale) are on the right time zone - they are now! pic.twitter.com/V4sNEzd6HR

5. Vertical farms are saving lives: Vertical farms are being used beyond food. In fact, they're being used to aid human health. Caliber Biotherapeutics in Bryan, Texas is home to the world's largest plant-made pharmaceutical facility. This 18-story, 150,000 square foot facility contains a staggering 2.2 million tobacco-like plants stacked 50-feet high, that will be used for making new drugs and vaccines. Because the indoor farm is so carefully monitored and tightly controlled by technicians, these expensive plants are shielded from possible diseases and contamination from the outside world.

Barry Holtz, the CEO of Caliber, told NPR that the facility is also efficient when it comes to water and electricity: "We've done some calculations, and we lose less water in one day than a KFC restaurant uses, because we recycle all of it."