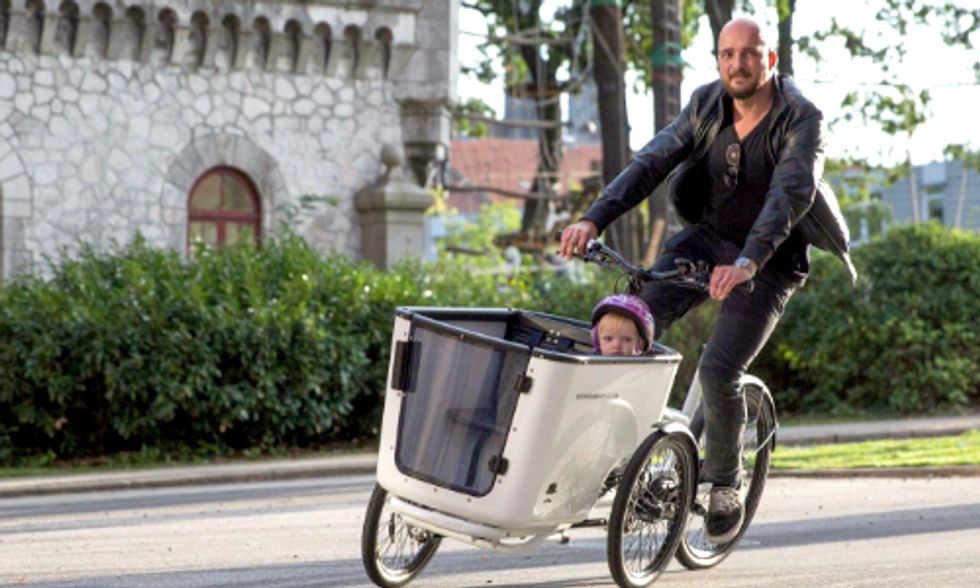 With Americans driving less and more cities encouraging people to bike, the humble cargo bike has quietly gained traction in the U.S. Parents are pedaling their kids to school in front-loading "bakfiets" (or "box bike" in Dutch), and food vendors are zipping through traffic to deliver coffee and other goodies.

Cargo bikes are like eco-friendly SUVs for many families. Photo Credit: Butchers & Bicycles

And while cargo bikes provide all the benefits of traditional bikes (reducing pollution, saving money, promoting health), cargo bikes have many pluses that typical two-wheelers don't, including ...

Think of them as pollution-free minivans that can carry much more than groceries. These guys can haul quite the load. Two-wheeled models can have a 400 pound load capacity and three-wheeled models can have a 500 pound load capacity, meaning there's certainly room for extra riders. So throw in a toddler or two, or even take a date out for a spin as Bike Calgary vice president Dale Calkins did:

And, yes, you can also transport pets.

2. They are incredibly customizable

The Atlantic's CityLab recently featured this solar-powered beauty from from Durham, N.C.-based Organic Transit. Their appropriately named ELF ("Electric, Light and Fun") bike, can go up to 30 miles per hour and comes with headlights, turn signals, a roof and plenty of cargo space. You'd think with all this hardware you'd need some kind of a license, but since it's legally a bike, ELF cyclers can peddle on bike paths or lanes and in any weather, the publication noted.

Organic Transit boasts that if their ELF is used in place of a car, it could prevent up to six tons of CO2 from spewing into the atmosphere each year. "There is nothing more polluting than driving our cars each day," company founder Rob Cotter said. "As individuals, we are limited as to what we can effectively implement, but we can change how we behave. Getting out of your car and using your body along with a solar assist is the most powerful thing you can do."

The design possibilities are endless. Creative minds are transforming cargo bikes from something very practical and utilitarian into versatile art. Check out this rocket cargo bike from a London bike show ...

... as well as this whimsical home-built bakfiet that its young riders surely love.

And while the idea of riding such a lumbering bike might make some quads tremble, this three-wheeled ride from Butchers & Bicycles can whip around turns with the speed and agility of standard cruisers.

3. Food on the go, minus the fumes

Speaking of customizable, we recently took a look at the booming food bike craze, detailing how on-the-go kitchens are selling everything from popsicles to grilled cheese sandwiches. Yes, food bikes are vulnerable to erratic weather, but at the same time, because they don't rely on gas, food bikes are of course free from harmful emissions and pollutants. In fact, for every one mile pedaled rather than driven, about one pound of CO2 is saved.

Another advantage to vendors? Cargo bikes are also immune to road congestion and can park right outside of buildings for efficient delivery. As Charlie Wicker of Trailhead Coffee Roasters in Portland told NPR, “On a bike, you’re basically impervious to traffic jams. I can calculate my delivery time down to the minute.”

4. It's another encouragement to ditch the car

National trends indicate a decline in driving thanks in part to the proliferation of transportation apps, vehicle and bike sharing programs, and cargo bikes adding to the growing list of green-transport options. As far as cost goes, cargo bikes range between $1,000 and $5,000. However, there are cheaper models from China that can be found on the market, as cargo bike owners Chris Bruntlett and Melissa Bruntlett noted on Grist. But considering how much you'd save on fuel, maintenance, taxes and insurance, the investment is really a drop in the bucket. The writers also suggested checking out peer-to-peer bike sharing site Spinlister.com to see if someone near you is renting out their cargo bike. Bike-friendly cities are also making it easier to own and park a relatively lumbering ride, such as this train station in Malmo, Sweden that has designated spots for cargo bikes.

5. They fuel social and environmental change

Cargo bikes would definitely make your own commute much more eco-friendly, but they are also bringing positive changes to developing communities. As we previously reported, the winner of this year's Sustainia Award was Wecyclers from Lagos, Nigeria with their fleet of low-cost cargo bicycles that pick up, collect and recycle garbage in low-income neighborhoods. Their initiative also enables people in low-income communities to make money off of the unmanaged waste piling up in their streets, where overburdened municipal governments collect only 40 percent of city garbage.