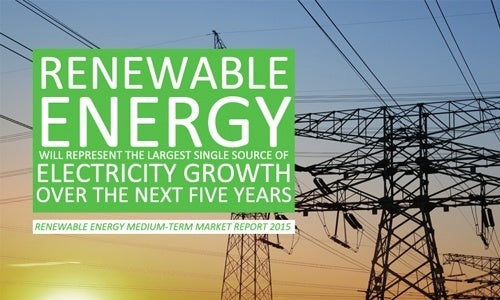 The International Energy Agency (IEA) on Friday released a report, Medium-Term Renewable Energy Market Report 2015, which found that by 2020, 26 percent of the world’s energy will be generated by renewable sources. The agency notes this is “a remarkable shift in a very limited period of time.”

“Renewable electricity expanded at its fastest rate to date, 130 GW (gigawatts), in 2014 and accounted for more than 45 percent of net additions to world capacity in the power sector,” says the report. Costs for renewable energy just keep going down and will continue to do so. “Even in a lower fossil fuel price environment, the policy drivers for renewable electricity—energy diversification, local pollution and decarbonization aims—remain robust.”

The world’s energy coming from clean sources (mostly hydro, wind and solar) is expected to rise from 22 percent in 2013 to 26 in 2020. “By 2020, the amount of global electricity generation coming from renewable energy will be higher than today’s combined electricity demand of China, India and Brazil.”

“Onshore wind leads the global renewable growth, accounting for over one-third of the renewable capacity and generation increase,” says the IEA. “Solar PV is the second-largest source of new capacity, another third of deployment. Hydropower accounts for one-fifth of new renewable additions, and over a quarter of generation growth. Meanwhile, other renewable technologies grow slower on an absolute basis, but still scale up significantly. ”

And in the countries of the Organization for Economic Co-operation and Development (OECD), renewables account for virtually all net additions to power capacity. But these countries only make up one-third of renewable growth. “China, India and Brazil and other developing countries account for two-thirds of the renewable expansion over the medium term,” according to the IEA.

And the prospects look good. In the U.S. alone, 40 percent of the nation’s coal plants, that were running just five years ago, have been shut down. Developing countries—namely India and China—are still adding fossil fuel plants, but installment is slowing and expected to peak soon.

“Renewables are poised to seize the crucial top spot in global power supply growth, but this is hardly time for complacency,” the IEA Executive Director Fatih Birol said at a press conference held in Istanbul, at the G20 Energy Ministers Meeting, to announce the report’s release. “Governments must remove the question marks over renewables if these technologies are to achieve their full potential, and put our energy system on a more secure, sustainable path.”

The agency finds that the biggest issue remains policies that subsidize dirty energy rather than expedite renewable energy. “But while variability of renewables is a challenge that energy systems can learn to adapt to, variability of policies poses a far greater risk,” says Birol.

Greenpeace and researchers at Stanford and UC Berkeley have already laid out plans for the U.S. and the world to reach 100 percent renewable energy in the coming decades. Now, it seems, we just need the political will.

Stephen Colbert to Donald Trump: ‘There Is Zero Chance’ You’ll Be President