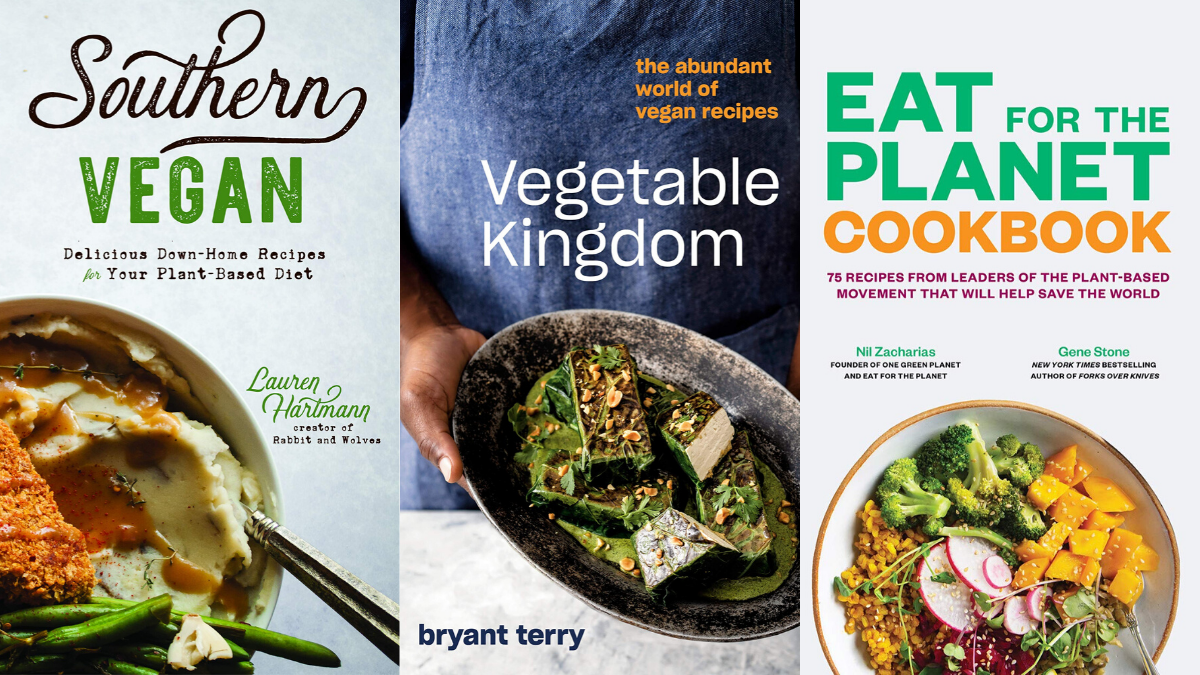 When I went vegan in 1988, there were, as far as I could tell, only two vegan cookbooks in existence. I probably made every recipe in them at least a few dozen times. Thankfully, things are very different today. It’s nearly impossible to keep up with the hundreds and hundreds of vegan cookbooks that have been released over the last decade or so. To help you narrow down which you should buy, here’s a list of 2020 vegan cookbooks that we’re most looking forward to. Whether you’re looking to stop supporting the horrific treatment of sensitive and intelligent animals in animal agriculture, start helping to preserve what remains of our natural environment, or improve your own health (or hey, why not all three?), these cookbooks will help make it simple—and delicious—to do so.

BOSH! is the biggest and fastest-growing plant-based food channel on the web, reaching more than 25 million people—and in this case, 25 million people definitely aren’t wrong. Henry Firth and Ian Theasby reliably come up with crave-worthy, imaginative recipes that are easy and fun to follow. This is their third cookbook, which will be focused on healthier fare, and it hits stores on January 28.

Eat for the Planet Cookbook

This follow-up to the eye-opening 2018 book Eat for the Planet contains animal- and planet-friendly recipes from a host of top vegan chefs, restaurants, and companies—even a few from our PETA coworkers! If you’re not familiar with the devastating effect of animal agriculture on our planet, this book will bring you up to speed and show you how to counter it without sacrificing flavor.

So Vegan in 5 Ingredients

A number of books have focused on vegan recipes with five or fewer ingredients, but this one by Roxy Pope and Ben Pook caught my attention when I saw a recipe for five-ingredient, from-scratch ravioli. I know, right? Other intriguing options include Rich Ragu, Super Squash Sheet Pan Bake, and Grilled Cinnamon Plums.

A totally objective fact: Vegan comfort food based on traditions of the American South is the best thing in the world. Thanks to Lauren Hartmann—the creator of the Rabbit and Wolves website—even if you’re not lucky enough to live near a restaurant specializing in this cuisine, you can now make beignets, chicken biscuits, pot pies, jalapeño hushpuppies, and Mississippi mud cheesecake without harming any animals.

Although it started out in San Francisco, Café Gratitude is probably the most Southern California restaurant in Southern California: All of its dish names are positive self-affirmations. It’s a cute gimmick that’s backed up with seriously legit food. Now you can serve its most beloved recipes—including “I Am Warm-Hearted” (grilled polenta with mushroom ragout), “I Am Gracious” (sundried tomato pesto grain salad), and “I Am Passionate” (black lava cake)—in your own home. Whether you require your family to say, “Could you please pass the ‘I Am Fearless’?” is totally up to you.

Kathy Hester is the author of a number of specialized vegan cookbooks. Her books on recipes for air fryers and slow cookers are well-worn favorites at my house, and if you’re one of the many people who have simplified their cooking routines with an Instant Pot, I’m sure this book will be similarly indispensable for you. The vegan, gluten-free recipes range from Chickpeas and Dumplings and Veggie Hunter’s Lentil Quinoa Stew to from-scratch yogurt and sliceable cheese and Almond Berry Cake.

Full disclosure: I was drawn to this book because the first part of the title is something people say to me all the time. This cookbook from first-time author and plant-based nutritionist Lisa Dawn Angerame focuses on delicious vegan versions of familiar dishes such as meatballs, burgers, pasta with Bolognese sauce, and egg salad. It’s a great option for new and aspiring vegans who are worried that they’ll have to eat strange new food—or for experienced vegans who still sometimes crave the flavors of their childhood.

Cookbooks often say that they’re designed for busy people, but I’ve never been more confident that’s actually true than when I read that Jackie Sobon‘s upcoming one includes the category “Car Breakfasts.” In addition to recipes, the book contains shopping lists, checklists, and a step-by-step guide for making prep day as efficient as possible. In short, I really need this book. Maybe you do, too.

Reposted with permission from PETA.