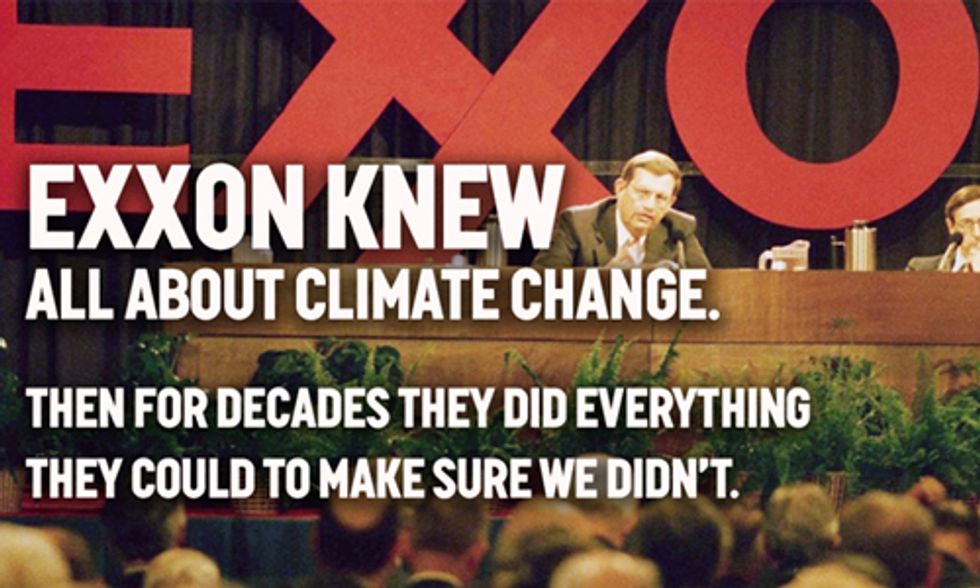 In a move many are hailing as a "turning point" in the climate fight, 20 state Attorneys General on Tuesday launched an unprecedented, multi-state effort to investigate and prosecute the "high-funded and morally vacant forces" that have stymied attempts to combat global warming—starting with holding ExxonMobil and other industry giants accountable for fraud and suppression of key climate science.

"Everyone is impacted by climate change, which means everyone has a stake in these investigations," said 350.org executive director May Boeve. "A trial of ExxonMobil and the fossil fuel industry would be even bigger than the cases against Big Tobacco." Photo credot: 350.org

"Fossil fuel companies that deceived investors and consumers about the dangers of climate change should be, must be held accountable," Healey continued, saying there is a "troubling disconnect between what Exxon knew, what industry folks knew and the company and industry chose to share with investors and the American public."

The coalition of Attorneys General from 16 states and the U.S. Virgin Islands was convened by Schneiderman, who in November announced a state investigation into Exxon after reporting revealed that the oil giant had for decades known and suppressed evidence about the dangers that fossil fuels posed to the environment and then purposely disseminated false information in order to boost its profits.

California has also launched an investigation and on Tuesday Healey and U.S. Virgin Islands Attorney General Claude Earl Walker confirmed their states have as well. Schneiderman said that additional states were pursuing similar action and that the purpose of the coalition is to work together in this "common interest."

"The scope of the problem we are facing, the size of the corporate entities and alliances and trade associations [working against science and public interest] is massive and it requires a multi-state effort," Schneiderman said.

AG Walker said that Puerto Rico and the Virgin Islands are already "experiencing the effects of global warming," from coral bleaching and the proliferation of seaweed, to ever-more powerful hurricanes.

"It is troubling that, as the polar caps melt, there are companies that are looking at that as an opportunity to go and drill, to go and get more oil. How selfish can you be?" Walker asked. "Your product is destroying this Earth and you want to do what? Destroy the planet further," he added, saying they have "documents" showing just that.

"We will not stop until we get to bottom of this and make it clear we have to do something transformational," he added. "We cannot continue to rely on fossil fuels."

Environmental groups that have spearheaded the call for accountability and investigations into what Exxon knew heralded the announcements and the new AG climate coalition.

"This creates a huge sense of momentum. Exxon may have been able to brush aside a few isolated inquiries, but with more states jumping on board, these investigations are sure to generate some serious waves," said May Boeve, executive director of 350.org, which on Tuesday launched the website ExxonKnew.org to share information about the investigations and petition the U.S. Department of Justice and state Attorneys General to "hold Exxon accountable."

"The Exxon revelations may turn out to be the largest corporate scandal in history," Boeve continued. "Everyone is impacted by climate change, which means everyone has a stake in these investigations. A trial of ExxonMobil and the fossil fuel industry would be even bigger than the cases against Big Tobacco."

"In the '90s, investigations by attorneys general were the beginning of the end for Big Tobacco as we knew it and ushered in a series of lawsuits that shuttered its front groups, forced the release of internal documents and held it liable to pay the high cost of its impacts on society. Just as a similar coalition did with Big Tobacco, this powerful coalition of state Attorneys General are leading the way in holding Exxon and the rest of the fossil fuel industry accountable for their decades of deception and protecting climate policy from their profit-driven interference."

"Big Polluters have done everything in their power to deny climate change, it is time for our justice system to take back the climate debate," declared Annie Leonard, Greenpeace USA executive director, who said the AGs' announcement was "a clear demonstration of climate leadership."

Appearing alongside members of that group, former Vice President Al Gore, whose 2006 documentary film An Inconvenient Truth is credited with spurring public debate about climate change, said, "I really believe that years from now this convening ... may well be looked back upon as a major turning point in the effort to hold to account those commercial interests ... who have been deceiving the American people about the dangers of climate change."