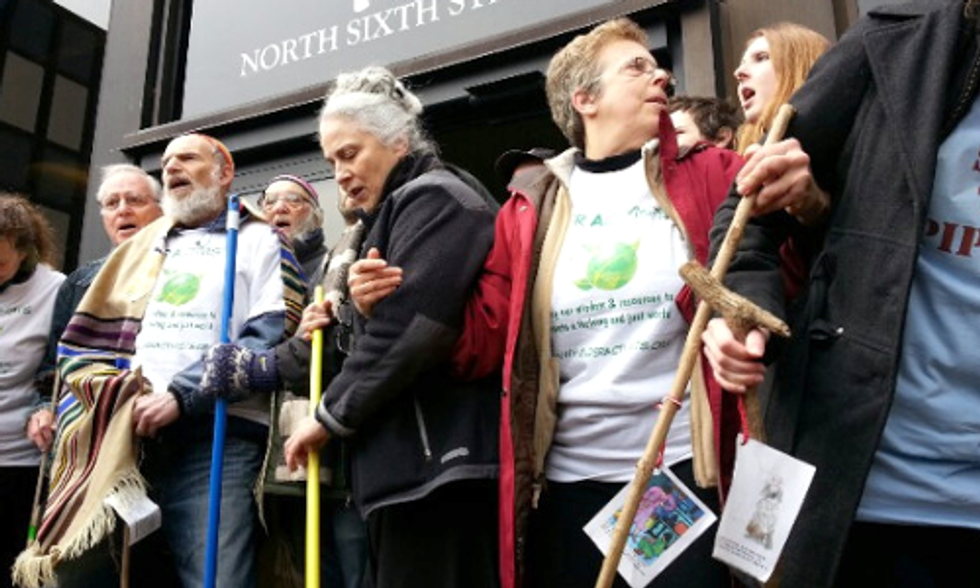 Today, protesters in Philadelphia, PA, targeted the corrupt process that produced the U.S. State Department’s final analysis claiming the Keystone XL pipeline would not cause any “significant” climate damage.

The formal public comment period on the pipeline decision came to a close Friday, so today Keystone XL opponents turned from words to actions, saying “No” to the pipeline by putting their bodies on the line.

In front of the Federal Building activists brought brooms, to "sweep out" the corruption of the State Department's Final Environmental Impact Statement, underwritten by a firm with close ties to TransCanada and the oil industry.

"A few years ago I realized that all the things I do to secure my children's future—from bringing them to the doctor for annual checkups to helping them with their homework—won't mean anything if the climate they inherit is destroyed," said Eileen Flanagan, Earth Quaker Action Team (EQAT) board member and mother of two. "I'm willing to risk being arrested to show President Obama that this issue is this important."

As the time draws closer for President Obama to decide whether or not to allow the pipeline that would carry 830,000 barrels of crude oil per day from Alberta, Canada, to refineries on the U.S. Gulf Coast, hundreds of thousands of Americans have already opposed the pipeline in multiple ways—and the movement is growing.

“We’re in a deep hole with the climate,” said Jonathan Lipman with 350 Philadelphia. “The President says he wants to help us climb out. But approving this pipeline would just dig the hole deeper. If we are serious about changing course on climate change, we must start reducing oil consumption and oil production now.”

President Obama ran on a promise of “ending the tyranny of oil.” Today’s protestors reminded him that he would betray both his campaign promise and his commitment to battling climate change if he caves to Big Oil and approves the pipeline.