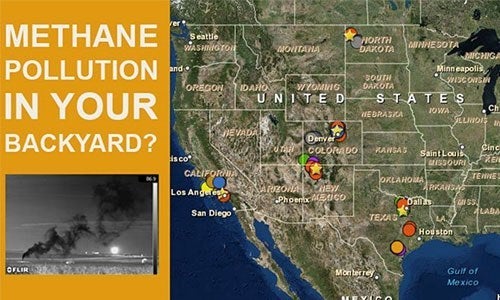 Just as the worst methane leak in California’s history is sealed and the U.S. Environmental Protection Agency (EPA) acknowledged that America pollutes much more methane than previously estimated, Earthworks—the group that filmed the videos revealing the scope of the methane disaster in Los Angeles County—released a map of 180+ infrared videos of oil and gas methane pollution events across the country.

New .@EPA estimates show we have a huge #methane problem, now you can see it: https://t.co/5K7XAKLHfh pic.twitter.com/ldRKf3G3ym

The map, created with the help of FracTracker Alliance, includes two new videos that epitomize the national methane pollution problem.

The first is of a well near Longmont, Colorado:

The second one is of a massive pipeline blowdown in North Dakota’s Bakken shale region:

“In November of 2012, the voters in Longmont banned fracking to protect our health, safety and wellbeing, especially because of air pollution,” said Kaye Fissinger, president of Our Longmont.

“The air we breathe in Longmont is still subject to ‘toxic trespass’ from extreme extraction in communities nearby. It’s long past time for government to stop tinkering around the edges and genuinely address the ever-growing damage that fracking and drilling inflict.”

“For the past eight years I have witnessed the rapid increase of oil and gas industrialization and the environmental destruction that comes with it,” said Lisa DeVille of Dakota Resource Council and the Three Affiliated Tribes. “Finally we can see the air pollution that’s all around us. We are concerned about the harmful health and environmental impacts of methane and other air pollutants released from well sites. This is an unmeasurable cost to tribal members on Ft. Berthold and those downwind. We value our health and our lands.”

“After crisscrossing the country for more than a year collecting these videos, we’ve learned oil and gas air pollution is inevitably associated with oil and gas development,” said Bruce Baizel, Earthworks energy program director. “These videos show we need strong state and federal rules for all new and and existing sources of this pollution. The Environmental Protection Agency in particular needs to propose rules covering existing pollution sources to accompany their proposal to cut pollution from new oil and gas facilities.”

“Infrared videos allow us to see the magnitude of EPA’s draft Greenhouse Gas Inventory revision in black and white. Oil and gas methane pollution is more severe than previously thought, and more widespread,” said Lauren Pagel, Earthworks’ policy director. “We need EPA to step up and set standards for oil and gas climate pollution from all facilities. But frankly the best way to eliminate this pollution is to keep dirty fossil fuels in the ground.”

Fracking Cases in Pennsylvania Expose the Human Cost of Drilling