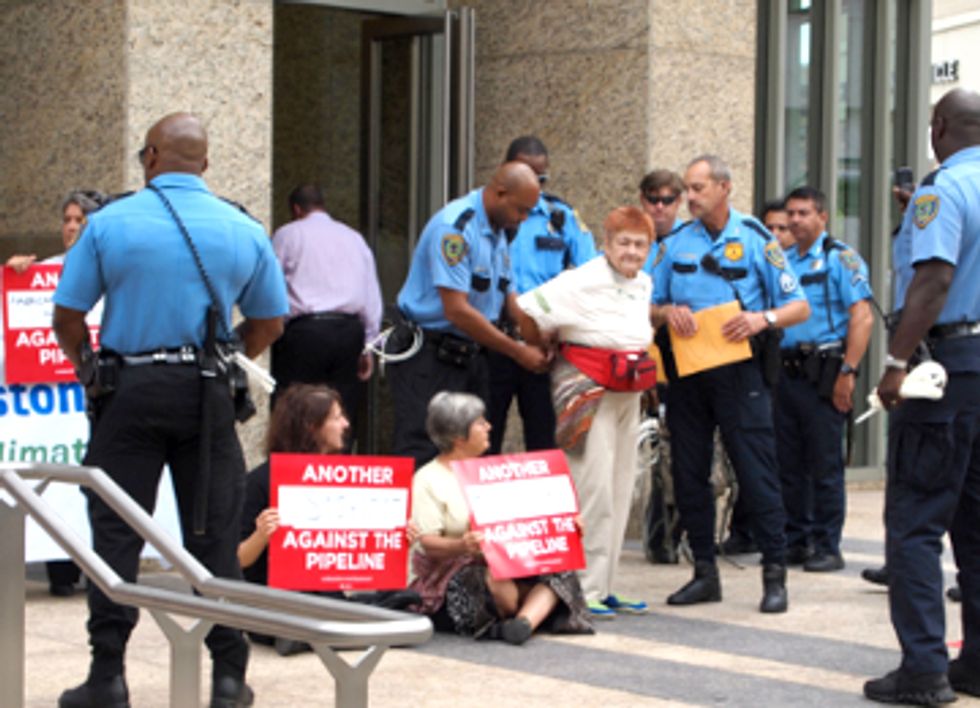 Thirteen activists were arrested while staging a peaceful sit-in at the Houston TransCanada Headquarters in opposition to the Keystone XL pipeline. Dozens of Texans rallied nearby in support of the activists who risked arrest at Monday's protest.

Activists rallied across the street in Market Square Park with signs before marching to the TransCanada office and staging a sit-in in protest of the foreign oil company's efforts to build a giant pipeline through American soil so it can export the tar sands oil to China.

This is the third civil disobedience action organized by CREDO, Rainforest Action Network and the Other 98% to maintain pressure on President Obama and the State Department to reject Keystone XL once and for all.

"Plain and simple, TransCanada's Keystone XL pipeline is not in our country's interest," said Amanda Starbuck, the energy and finance program director for Rainforest Action Network. "If President Obama approves the dangerous Keystone XL pipeline he will be sending the message that the financial interests of companies like TransCanada take priority over the health and safety of the American people. I'm pretty sure he doesn't want to do that."

“TransCanada’s first crude pipeline leaked 100 times more than the company expected within the first year of its operation," said Susan Baerst, a former financial analyst for a pipeline company in Houston, who participated in the protest. "The company’s business model depends on a ‘least cost’ solution to spills that shifts the burden for clean up onto American taxpayers, and will ruin our environment in the process.”

"We are here today to send a message that we won't stop protesting the dangerous Keystone XL pipeline until President Obama rejects it," said Becky Bond, political director of CREDO. "This foreign oil company only wants to build the Keystone XL pipeline through American soil so it can export some of the dirtiest oil on the planet to China."

"The health of our climate, and landowners from Texas on up to Nebraska, will pay the price for TransCanada's greed if President Obama doesn't act swiftly and reject Keystone XL," said Bond.

Canadian Prime Minister Stephen Harper recently made a desperate attempt to convince President Obama to approve the pipeline, offering “joint action to reduce greenhouse gas emissions” if that is what is required to win the project’s approval.

A great grandmother is arrested during the sit-in in protest of the Keystone XL pipeline at TransCanada HQ. Photo credit: Becky Bond

The State Department is currently investigating the contractor that drafted the latest controversial environmental analysis of the pipeline for failing to disclose ties with TransCanada, and with the powerful oil lobby, the American Petroleum Institute.