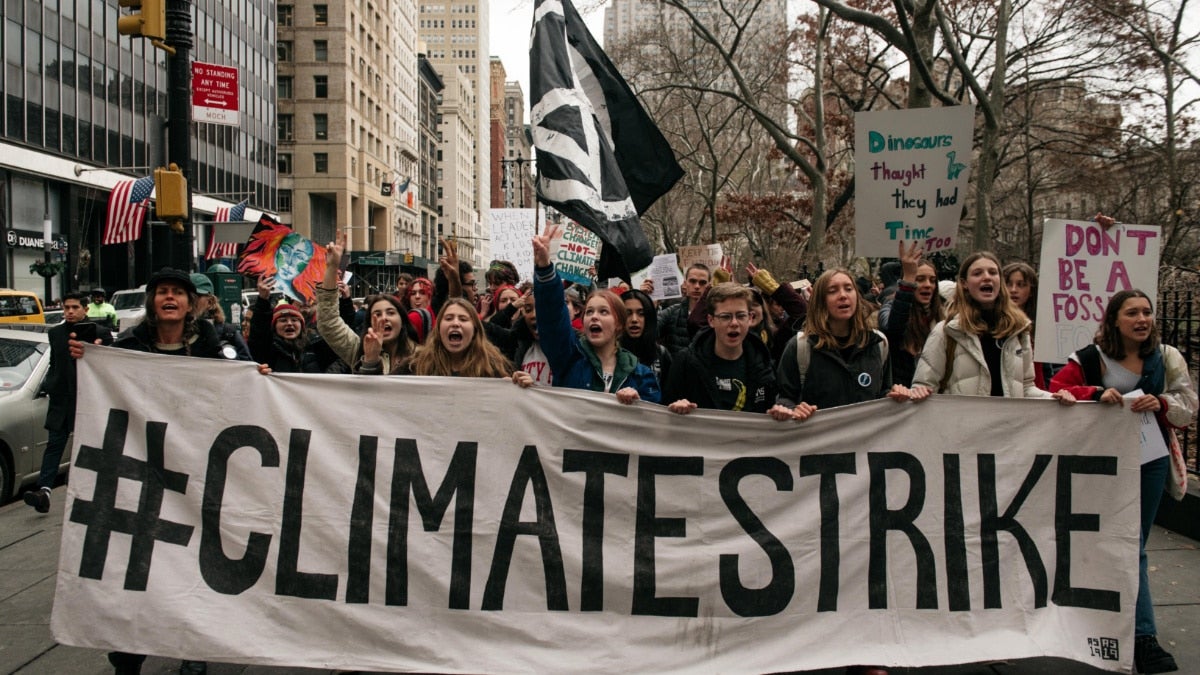 This story is published as part of StudentNation’s “Vision 2020: Election Stories From the Next Generation” reports from young journalists that center the concerns of diverse young voters. In this project, working with Dr. Sherri Williams, we recruited young journalists from different backgrounds to develop story ideas and reporting about their peers’ concerns ahead of the most important election of our lives. We’ll continue publishing two stories each week over the course of September.

In the speech she gave at the People’s Climate March in Washington in 2017, Jansikwe Medina-Tayac, then 15, told a crowd of thousands, “This [climate change] is not just an environmental issue. This is a race issue, this is an immigration issue, this is a feminist issue.”

The experience was a formative moment for Medina-Tayac, who devoted much of her free time to climate justice advocacy. “I remember waking up the next morning and my mom was like, ‘Jansi, your video got like 500,000 views,'” Medina-Tayac, who lives in Silver Spring, Md., said. “At that age you’re not used to being listened to by people.”

Now 18, she cofounded the Washington chapter of Zero Hour, a woman-of-color-led climate justice organization with fellow student activist Khadija Khokhar in February. “To me, the people who are fighting against climate change and who are most affected are people of color,” Medina-Tayac said. “And yet we don’t see them reflected often.” This is what she hopes Zero Hour will do.

Medina-Tayac, a member of the Piscataway Nation, a Native American tribe historically based around the Chesapeake Bay, and Khokhar, a Muslim and a first-generation immigrant, both felt that other climate movements they participated in were whitewashed. After meeting at one of Jane Fonda’s Fire Drill Friday rallies in the fall, they kept in touch, and by the new year, they decided they wanted to be a part of a movement that incorporated inclusive policies and more people of color in leadership. “I honestly feel like there aren’t enough of those spaces,” Medina-Tayac said. “I’m really just making sure to reach out to as many communities as I can and really creating a space where people feel safe to share about their experiences. Just a space where people can learn and share and be equal partners.”

Young voters are intimately aware that they will be forced to bear the full effects of climate change, and this is especially true for frontline communities in areas with higher pollution or fewer green spaces or on coastlines being eaten away by rising oceans. Zero Hour’s platform reflects that duality: The organization calls for a “Just Transition” away from fossil fuels by 2040 like many other climate advocacy groups, but it also counts defending the treaty rights of Native Americans, for example, as a core part of its mission “because treaty rights are the only truly rigorous laws already in place that protect the land, the water, the wildlife, and the people.”

Far beyond the presidential election, young activists from organizations like Zero Hour, Sunrise Movement, and beyond are demanding that all political candidates in the 2020 election begin to make mitigating global warming a key policy issue, and not just a talking point. During this polarized election year, these activists are finding ways to create climate policy at every level of government. “The goal is to get mass mobilization, to get everybody out in the streets,” Khokhar said. “The entire climate movement is already rolling.”

Millennials and Generation Z are the only generations in the United States where a majority of survey respondents say Earth is getting warmer due to human activity, according to a 2019 survey by Pew Research Center. Among 1,000 voters aged 18–29, one survey found that as many as 4 in 5 believe “global warming is a major threat to human life on earth as we know it.”

Though the majority of Generation Z is still too young to vote, Generation Z and millennial voters already make up nearly 40 percent of the electorate, according to Carolyn DeWitt, president and executive director of Rock the Vote. With that level of power comes expectations about their clout as a voting bloc.

Although Medina-Tayac is now voting age, she is remaining focused on educating young people about policies like the Green New Deal rather than the presidential election. “I think the Green New Deal is really, really important and has sparked a lot of really interesting ideas in the movement,” Medina-Tayac said. “[The climate justice movement] needs to be people-powered and there has to be policy-making.”

During the Democratic primary, Khokhar was a strong supporter of Senator Bernie Sanders and valued his support for the Green New Deal. But now, with the primaries over and the pandemic ravaging the nation, she’s accepted a position as the Detroit fellow for Zero Hour’s Vote for Our Future campaign. In the role, which was created as part of a campaign to boost youth voter turnout, Khokhar is partnering with community organizations near her home in southeast Michigan, where she returned when quarantining began.

“What we’re trying to do is get out young voters, because the youth voter turnout is a lot lower than it should be,” Khokhar said. “It should be a lot higher, and the people that young people who aren’t voting should hear that message from are [other] young people.”

Some young activists compare today’s climate activism to the civil rights movement in the 1960s, arguing that both are youth-led movements focused on systemic change. And like in the civil rights era, the current wave of activism has driven engagement at the polls. In modern times, the more young people participated in activist work ranging from signing an online petition to attending a demonstration, the more likely they were to vote in the 2018 midterm elections, according to research conducted at Tufts University’s Center for Information & Research on Civic Learning and Engagement.

In fact, much like the civil rights movement, the modern environmental justice movement began in the South. In the 1980s, a young sociologist named Robert Bullard was asked by his wife, attorney Linda McKeever Bullard, to conduct research for a lawsuit against the local waste management company. Bullard studied the location of toxic waste sites in Houston and discovered that for decades, these sites had been systematically placed in neighborhoods that were predominantly Black or brown.

Bullard waited years to get recognition from mainstream civil rights organizations, but he places his work in a long line of activism around dignity for black workers in the United States. Bullard notes that the final event that Dr. Martin Luther King Jr. attended before his assassination was a sanitation workers’ strike in Memphis, where Black workers were forced to move the city’s garbage for low pay in inhumane conditions. “The environment piece was not something that was on the radar [of civil rights organizations,]” Bullard said. “The issue died with him.”

But Bullard continued to press his case with Black civil rights groups and white environmental groups, undeterred. By 1990, Bullard had conducted enough research with academics and activists around the country to write what would become his first book, Dumping in Dixie. “It took two decades for us to get the two groups to converge in a way that people saw this as something that should be baked into their work,” Bullard said.

Indeed, young activists have become increasingly more focused and sophisticated in how they push for action on issues like climate change, said Katie Kirchner, national director of the Roosevelt Network. A former campus organizer herself, Kirchner coordinates a program that “trains, equips, and develops progressive policymakers” at the local level. Kirchner sees that local work as complementary to activism taking place at the national level to create federal climate policy. “The organizing that Gen Z has been doing in general has been phenomenal,” Kirchner said. “We have to have a movement that’s powerful enough to hold politicians accountable across the board at every level, really.”

In their inaugural meeting at a Washington, D.C., hotel on February 23, Medina-Tayac and Khokhar walked attendees through a PowerPoint presentation of how they believed climate change and sustainability were intersectional issues.

“We believe that people on the frontlines should lead the movement,” Khokhar, 19, told the attendees. “Especially in the climate movement, we’ve seen in a lot of organizations, it’s a lot of privileged white people, to be completely candid, who are leading this movement who haven’t really faced the effects of the climate crisis or are just now starting to. So we really value giving the voice back to the people who have been fighting this fight for so much longer.”

The organizers walked attendees through slides that helped introduce some of the young attendees to complex issues like colonialism, racism, and the prison-industrial complex. By the end of the discussion, the gathered crowd was discussing future plans for an Earth Day strike and the importance of scheduling events to be inclusive to those fasting for Ramadan and welcoming to long-time residents of Washington, D.C.

One of the young activists in attendance that day was Iris Zhan. A high school student in Clarksville, Md., Zhan is just 16. Last year, Zhan wanted to organize a #FridaysForFuture walkout at her high school in solidarity with the movement begun by Greta Thunberg, the internationally renowned student climate activist from Sweden. But Zhan realized that in order to get students to come to her rally she’d have to ensure they wouldn’t be penalized by the school for attending.

“We’re like, ‘How are we going to get people to come out?'” Zhan said. “The only way is to get an excused absence for that day.”

Zhan circulated a petition that eventually received hundreds of signatures, enough to convince the school to make the walkout an excused absence. As a bonus, the petition also increased awareness about the work she was doing with Sunrise Movement, another youth environmental justice group.

“[After that,] people kind of knew who I was, like I’m the climate person,” Zhan said. “There’s real stuff you can do besides a walkout, and people were able to see that.”

Since the walkout, Zhan has gathered a group of friends she considers her “strike circle” to attend local meetings for organizations like Zero Hour and attended a climate strike at the Howard County government building in December, where she spoke with local politicians about the movement.

Zhan said that although she considers herself and her peers to be studious, they also view it as equally important to take time to advocate for policies that matter to them, regardless of whether they’re able to vote. Walkouts, for instance, were once considered radical, Zhan said, but she believes they’re almost a new normal for Generation Z.

“I think when you plant the activist mindset at a young age, it sticks with you,” Zhan said. “Once you care about it you can’t un-care about it, it kind of ingrains itself into your personality, and change[s] the way you act.”