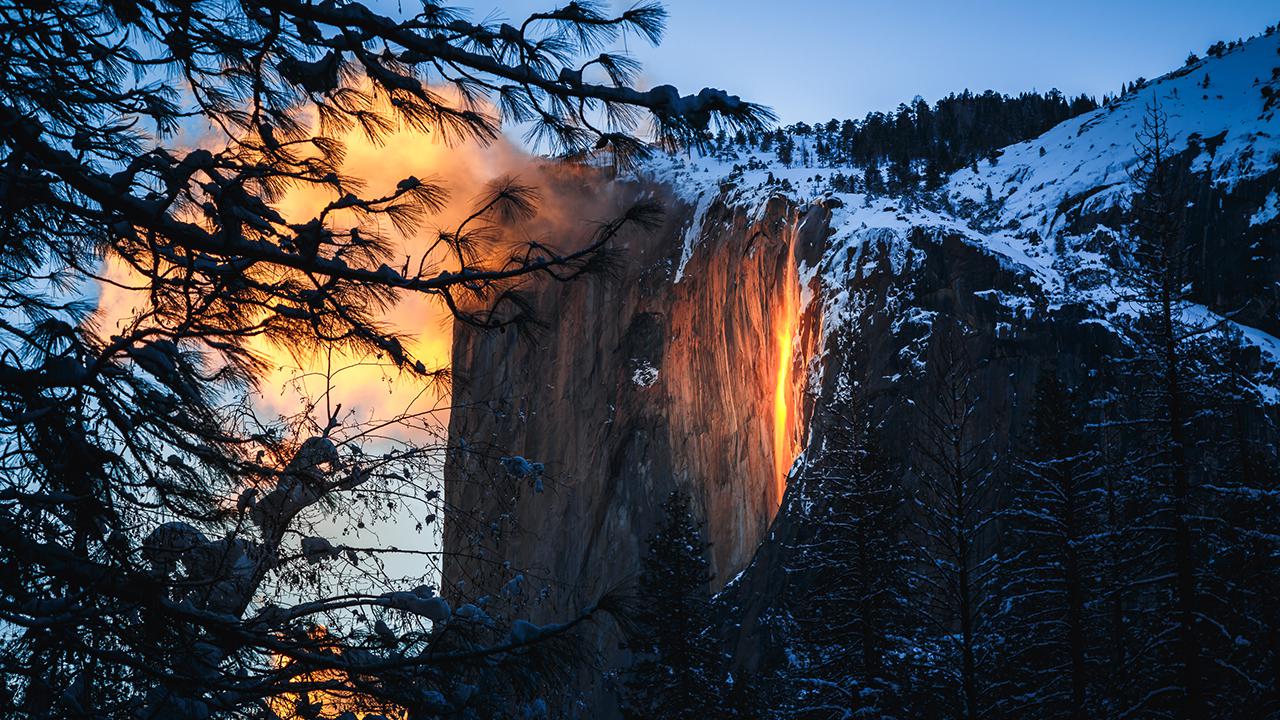 There are very few places that capture the essence of American beauty better than Yosemite National Park. Millions of people visit each year to explore its mountainous terrain, or to experience Yosemite’s unique natural wonders such as the giant sequoia groves or the hundreds of waterfalls that nourish the protected landscape.

One such waterfall takes the mainstage in mid-February as the park’s most popular winter attraction. Known as the “Firefall,” or Horsetail Falls during the spring and summer months, this waterfall glows fiery red in the wintertime as the sunset reflects off its waters. However, to see it in 2021 you’ll have to make reservations soon.

Starting February 8, Yosemite will put a reservation system in place for day use of the park. The park is taking extra steps to ensure social distancing protocols are followed and risks are minimized during COVID-19, and encourage visitors who want to see Firefall to book soon.

The expected viewing dates begin February 13th and end February 25th. Due to the short timeframe that the Firefall is visible, reservations are expected to book quickly.

For those unfamiliar with the Firefall, it is a bizarre and beautiful natural phenomenon that can only occur for two weeks out of the year. At sunset, the waterfall transforms from an icy shower to a glowing flame that appears to flow like lava from the heights of El Capitan. This occurs due to the unique angle of the waterfall against the sunset during mid-February.

Despite its massive appeal, the Firefall is actually quite elusive. In order for the illusion to occur, Horsetail Falls must be experiencing a clear Western sky, have enough snowfall the night before, and experience warm temperatures to melt the snow and sustain the waterfall. Due to the angle of the sunset against the waterfall, it can only occur for approximately two weeks in February, but a cloudy day or freezing temperatures can get in the way of the incredible display.

Not only are the Firefalls rare, but they’re also short-lived. The sunset will only be at the right angle for five to ten minutes, giving visitors a very short window to observe. However, those who have witnessed the Firefall believe it is always worth the effort.

Yosemite’s Firefall was first discovered in 1978 by photographer Galen Rowell. He was driving past Horsetail Falls at sunset, and witnessed the anomaly long enough to capture the first photos. After sharing them with a soon-to-be worldwide audience, Firefall became the #1 attraction at Yosemite during the month of February.

Since then, the natural wonder that occurs on Horsetail falls has become a global spectacle, coveted by photographers, artists, and nature enthusiasts alike. Thousands of people visit the park during mid-February each year solely to chase the elusive majesty of this waterfall at sunset.

Horsetail Fall is located over the eastern edge of El Capitan, which is not possible to reach by car. The closest parking is one and a half miles from the actual viewing site, so it is important to book your reservation and arrive early if you want to catch a glimpse of it at sunset.

Savannah Hasty is an environmental writer with more than six years of experience and has written thousands of articles for clients around the world. Her work focuses on environmental news, lifestyle content, and copywriting for sustainable brands. Savannah lives on the sunny coast of Florida and is inspired by this to play an active role in the preservation of the state’s marine life and natural ecosystems.