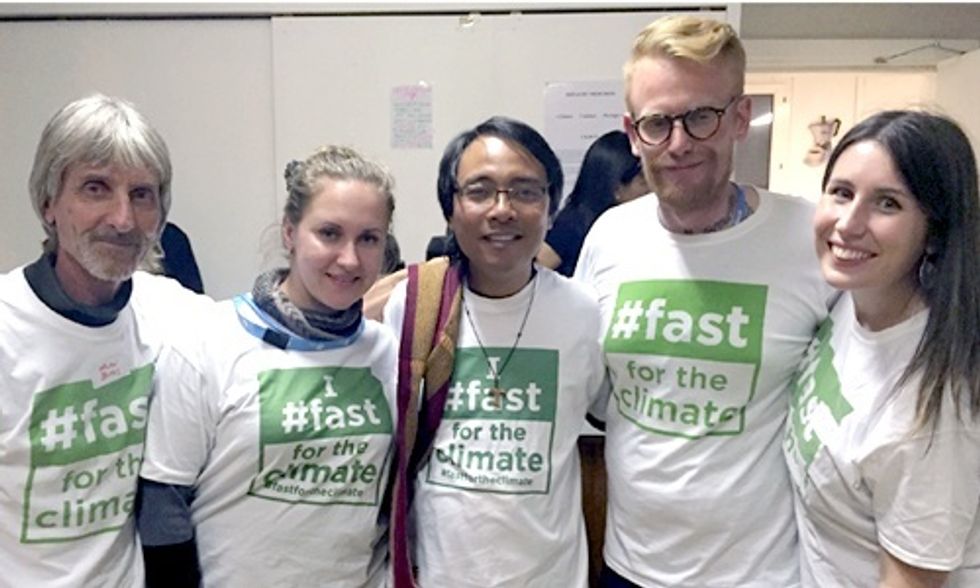 I arrived in Paris yesterday for the Paris climate talks, officially known as Conference of Parties or COP21. The ultimate goal of COP21 is a binding agreement signed by world leaders that will reduce global carbon emissions to limit global warming to 2C or 3.6F. COP21 began Nov. 30 and runs through Dec. 11.

I was looking forward to my first evening as I was hoping to get the chance to meet Yeb Saño, a former Philippine climate commissioner, who embarked on a 930-mile walk from Rome to Paris to arrive just in time for the climate talks.

I have been a long-time admirer of Saño ever since he gave an impassioned plea demanding climate action at the United Nations negotiations in Warsaw in 2013, just days after Super Typhoon Haiyan hit his country. Watch here:

Soon after I arrived at the event, I saw Saño and had the chance to ask him a couple questions.

First, I asked him what his greatest hope was for COP21. “Well I have an aspiration for COP21 to be the miracle that it should be," he replied. "We have been walking from Rome to Paris for close to 650 days. We have hope in our hearts that the miracle can happen here in Paris. It is really the only one that can provide the success that the world deserves. So I ask world leaders, please do not stand in the way from that miracle happening. I appeal to them that they look into their hearts and hear the clammer for change and transformation, and build a future that is safe, peaceful, harmonious and sustainable.”

Yeb Saño (middle) joined by other participants at the Fast for the Climate at COP21. Photo credit: Stefanie Spear

I asked him what else he’d like EcoWatch readers to know. “There are tons of things I want to say, but I want to talk about this particular moment right now where we are celebrating the Fast for the Climate for what it has become," Saño said.

Last night’s event was the culmination of a one-day fast where thousands of people from more than 90 countries fasted in solidarity with vulnerable people and to call for a just transition toward a safe climate future. The purpose of the evening event was to break the fast and join together to celebrate unity across faiths, cultures and continents as well as civil society’s global leadership toward climate action.

This was hardly the the first time people fasted for the climate. The event in Paris and others like it worldwide celebrate the global growth of the Fast for the Climate movement. Saño helped ignite the Fast for the Climate movement during his speech at the UN Warsaw climate talks when he declared, "I will voluntarily refrain from eating food during this COP until a meaningful outcome is in sight."

I will be attending many more events throughout the next 10 days. Stay tuned to EcoWatch's COP21 page for the latest news on the Paris climate talks.