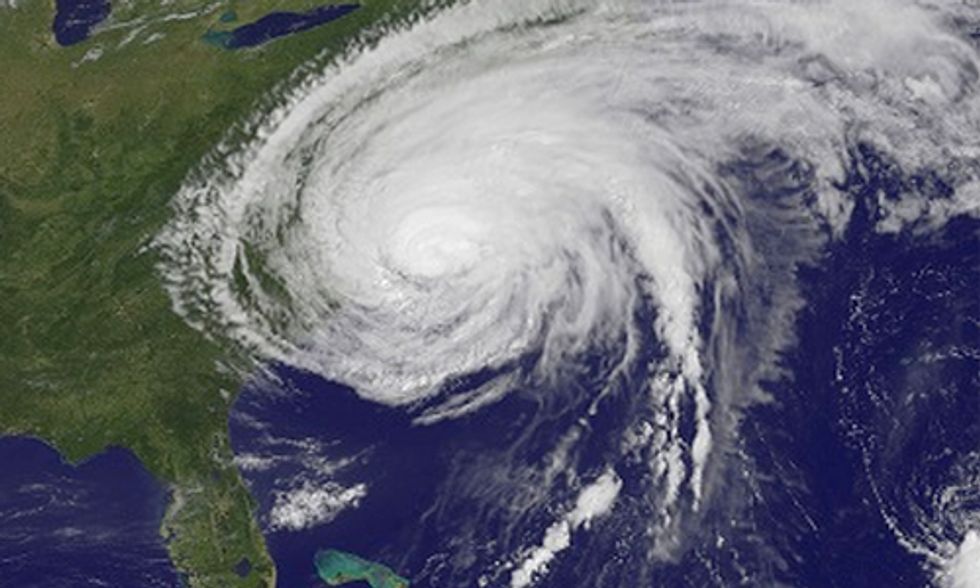 The hurricane season of 2014 just kicked off, and with two devastating storms wreaking havoc along the northeastern U.S. coast over the last few years, it’s no wonder everyone’s on edge.

A satellite image of Irene, a Category 1 hurricane, as it made landfall in North Carolina, Aug. 2011. Photo credit: NASA/NOAA

We’re concerned about hurricanes becoming more frequent and intense, and about the worsening storm surge caused by a rise in sea levels. But flying under the radar is a fourth link between hurricanes and climate change: how climate change affects the location of hurricanes.

A new study led by researchers at the National Oceanic and Atmospheric Administration (NOAA), the Massachusetts Institute of Technology (MIT) and Princeton University found that hurricanes have been shifting pole-ward at a rate of 30 to 40 miles per decade over the last 30 years.

It means they are moving closer to major population centers such as Washington, New York and Boston.

The likely cause? Human-caused climate change.

The migration of hurricanes has “potentially profound consequences for life and property,” the authors of the study warn in an article published recently in the journal Nature.

“Increasing hazard exposure and mortality risk from tropical cyclones may be compounded in coastal cities outside the tropics, while being offset at lower latitudes.”

This finding is an important advancement in scientists’ understanding of how climate change has already contributed to extreme weather events. Research shows that the rise in global temperatures already causes more warm days, heat waves and heavy rainfall.

Detecting trends in hurricane activity has been difficult, however, due to inconsistent and often unreliable historical data.

To get around this data challenge, the scientists at NOAA, MIT and Princeton developed a new technique that relies on a dependable subset of the data, and which teases out natural events such as El Niño to detect a distinct relationship between hurricane activity and climate change.

Their conclusion: hurricanes are drifting toward the poles most likely due to an expansion of the Hadley Cell, a permanent atmospheric circulation feature that carries heat from the tropics to the Earth’s temperate zones.

Scientific understanding is that the Hadley Cell expansion is a result of the increase in heat-trapping gases in the atmosphere from human activities. So as we continue to drive cars, generate electricity at fossil-fueled power plants, cut down trees and farm—we are indirectly pushing hurricanes farther north and south.

The new study is groundbreaking not only because it uses a novel technique, but also because it links a hurricane trend to climate change.

What We Know So Far

So where are we today with hurricanes and climate change?

This new research presented in Nature suggests that hurricanes are migrating toward the poles and may devastate densely populated coastal regions that had previously, for the most part, been spared such storms.

It’s yet another reason why we must act now to curb carbon pollution and limit climate change.

Cognitive Dissonance: Why Are We So Complacent in the Face of Climate Change?