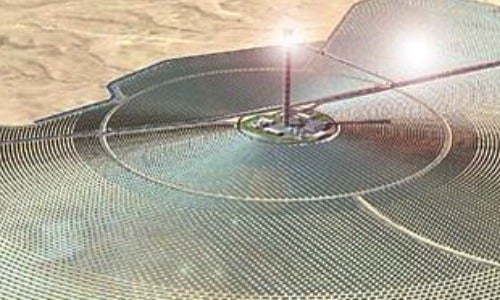 Israel’s 787-foot concentrated solar power tower—which will be the world’s tallest such tower once construction is complete—will bring up to 121 megawatts of renewable power to the country.

Megalim Solar Power—a joint venture between Oakland, California’s Brightsource and French engineering firm Alstom—is the company behind the $773 million project along with shareholders such as General Electric.

Israel’s new solar tower will stand at the center of a 3.15 square kilometer field covered by more than 50,000 sun-tracking heliostats (mirrors) Brightsource said in a press release. The cumulative surface area of the complex covers more than 1 million square meters.

The mirrors track the sun while concentrating sunlight onto a boiler atop the tower which will produce high temperatures at high pressures to feed a steam turbine to generate electricity.

The electricity generated at the facility will be enough to supply 120,000 homes with clean energy and will avoid 110,000 tons of CO2 emissions each year over the course of its life, Brightsource said on its website.

Interested in concentrated #solar power? Check out how it works! http://t.co/GLQiNhAkxo pic.twitter.com/cOZktzAMN6

The tower will supply 1 percent of Israel’s electricity under an agreement with the Israeli government, Reuters reported.

However, with its ample sunshine, Israel has “excellent” potential to tap into solar as a renewable energy source, Israel’s Ministry of Energy and Water Resources said on its website.

https://twitter.com/BrightSource/status/608768609066717184 as well as Israel’s national priority objectives relating to combating climate change and supporting renewable energy, as it will emit significantly less greenhouse gases and other pollutants than conventional thermal power plants.”

While Megalim’s tower is privately funded now, when operations commence by late 2017, the Israeli government has already committed to buying the power it generates at an above-market price, Reuters reported.

Learn more about the tower in the video below.