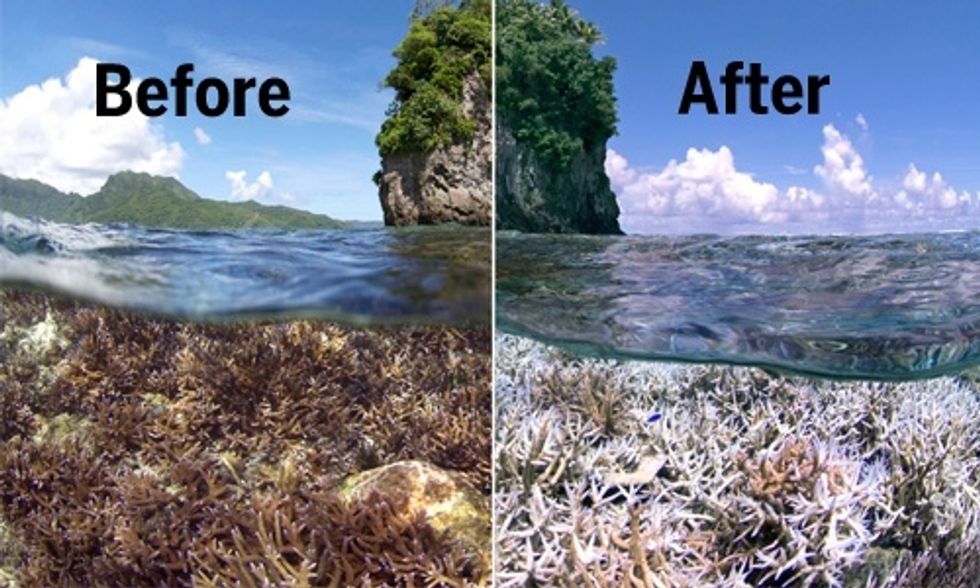 We recently reported on how Hawaii could be facing the worst coral bleaching in its history this year as surrounding water temperatures rise at unprecedented rates. Now scientists are warning that it's not just Hawaii but the entire world that is in the midst of the worst coral die off in history.

A consortium of scientists today from the University of Queensland, National Oceanic Atmospheric Administration (NOAA), XL Catlin Seaview Survey and elsewhere confirmed today that we are facing a third global coral bleaching event. The first major global coral bleaching event occurred in 1998 when a "huge underwater heatwave" triggered by the El Niño of that year killed 16 percent of the coral reefs around the world, according to the group. The second bleaching event was triggered by the El Niño of 2010.

NOAA is "predicting another strong El Niño and has now announced the third global bleaching event," says the group. "The event is expected to impact approximately 38 percent of the world’s coral reefs by the end of this year and kill over 12,000 square kilometers [4,600 square miles] of reefs."

The massive bleaching has occurred in recent years because of rising temperatures. Coral reefs, often referred to as "rainforests of the sea" simply "haven’t been able to adapt to the higher base temperatures of the ocean," say the scientists. "Although reefs represent less than 0.1 percent of the world’s ocean floor, they help support approximately 25 percent of all marine species. As a result, the livelihoods of 500 million people and income worth over $30 billion are at stake."

The University of Queensland's Global Change Institute director Ove Hoegh-Guldberg told The Guardian "the current event was directly in line with predictions he made in 1999 that continued global temperature rise would lead to the complete loss of coral reefs by the middle of this century."

“It’s certainly on that road to a point about 2030 when every year is a bleaching year … So unfortunately I got it right,” he said.

Coral reefs are threatened on so many fronts. "Today, many coral reefs are threatened by overfishing and pollution, as well as ocean acidification, disease and warmer ocean temperatures," says NOAA. "Even if corals survive a mass bleaching event, their vulnerability to infectious disease increases and their ability to reproduce decreases." The coral scientists estimate we’ve lost 40 percent of corals around the globe in the last 30 years alone.

The scientists point out that "the two previous events caught us relatively unprepared. The world simply didn’t have the technology, understanding or teams in place to reveal and record them properly." This year is different, though, say the scientists. The scientists have used the XL Catlin Seaview Survey, running off predictions issued by NOAA’s Coral Reef Watch program, to monitor the changes to our oceans. Now they are just trying to get the word out to save the world's coral reefs before it's too late.

And here is coral bleaching in Hawaii: