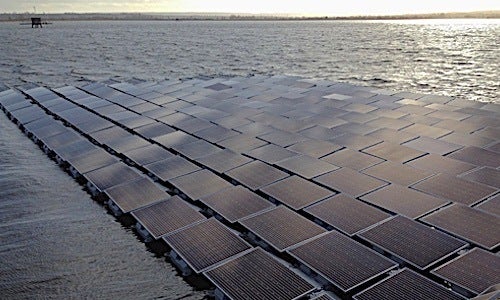 England will soon be home to Europe’s largest floating solar farm, if not the world. The 6.3 megawatt array consists of 23,000 solar panels that sit on the Queen Elizabeth II reservoir at Walton-on-Thames, a suburb of London near Heathrow Airport. 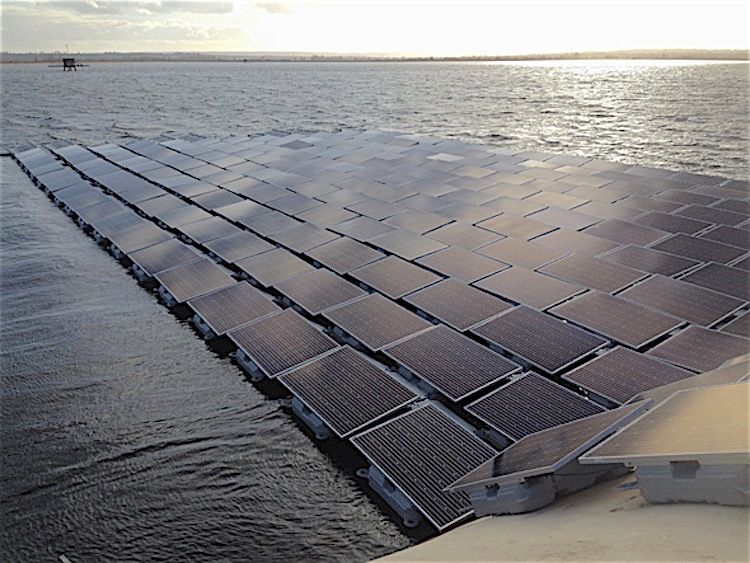 According to The Guardian, the £6 million (about $8 million) project will help power local water treatment plants that provide clean drinking water to London and south-east England’s 10 million residents

“This will be the biggest floating solar farm in the world for a time—others are under construction,” Angus Berry, energy manager for Thames Water, the utility which owns the site, told The Guardian. “We are leading the way, but we hope that others will follow, in the UK and abroad.”

Thames Water said in a press release that their floating pontoon will cover around a tenth of the Queen Elizabeth II reservoir, the same area as eight Wembley football pitches (London’s famous 90,000-capacity soccer stadium).

It will be the largest floating solar farm on the planet before Japan’s mega-solar farm finishes in 2018, which will have a capacity of 13.7 megawatts.

Thames Water, which has goal of generating a third of of its own renewable energy by 2020, said that the low carbon, renewable energy produced at the facility is expected to generate 5.8 million kilowatt hours in its first year—equivalent to the annual power consumption of around 1,800 homes.

Floating solar panels has a number of benefits. For one, compared to mounted panels, floating panels are naturally cooled because of the bodies of water they sit on, therefore boosting power production efficiency. The panels also shade the water itself, and limits the growth of algae.

Berry also told The Guardian that the project makes use of a space that is not currently used for any other purpose, adding that the array will have no impact on the ecosystem.

Also, as as Quartz noted, a floating platoon is easy to assemble: “Rather than using heavy machinery required for ground-mounted installations, the panels are clipped together and pushed out from the bank of the lake.”

For instance, this 200 kilowatt floating solar power farm in Sheeplands Farm, Berkshire was constructed in one week:

“We’re delighted to have begun work on another ambitious milestone project for Lightsource with our first floating solar installation,” said Lightsource CEO Nick Boyle in a statement. “Over the last five years we’ve successfully completed ground and roof installations of all shapes and sizes, but this project has some obvious differences and has presented our team with a set of fresh challenges to overcome.

“There is a great need from energy intensive industries to reduce their carbon footprint, as well as the amount they are spending on electricity and solar can be the perfect solution. We’re therefore constantly evolving new skill sets to ensure that all of our projects deliver maximum energy generation over the lifetime of the installation.”