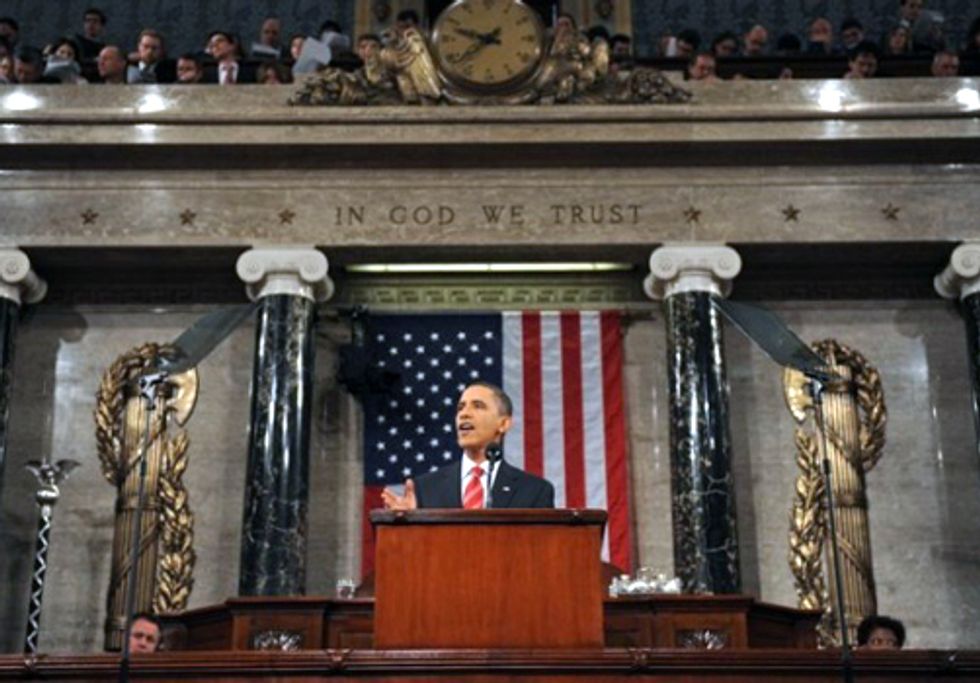 After months of dodging the question of climate change, the Obama administration, headed by a newly emboldened second-term president, is gearing up to move forward—cautiously. In last night’s State of the Union address, President Obama struck a moderate tone in warning the American people of the dangers of a warming planet and unstable climate, while giving great political play to the natural gas industry.

Make no mistake: natural gas, most recently extracted through a controversial practice known as hydraulic fracturing, or “fracking,” contributes greatly to climate change. While natural gas itself releases approximately 50 percent less greenhouse gas emissions (measured in carbon dioxide molecules) than coal, methane is a dangerously potent greenhouse gas. A single methane molecule can have up to 25 times the potency of a single carbon dioxide molecule. With methane leaks far more frequent at fracking sites than industry officials previously admitted, natural gas becomes less of a transition energy and more of a climate nightmare. Further, the local polluting of water reservoirs by fracking fluid protected by proprietary rights has raised serious public health concerns.

So is President Obama turning his back on future generations? No, not necessarily. While natural gas remains a controversial cornerstone of the Obama administration’s energy policies, the President is eager to make serious moves on renewable energy and energy efficiency.

In his State of the Union address, President Obama said, “Last year, wind energy added nearly half of all new power capacity in America. So let's generate even more. Solar energy gets cheaper by the year—so let's drive costs down even further.” He tied investing in alternative energy to becoming economically competitive with China and other booming economies.

After legislative burn-out in 2010, in which the Obama-supported cap and trade policy was crushed by partisan-driven Congressional politicking, the Obama administration has relied more heavily on the executive crutch to try and get things done. While often used effectively, executive orders aren’t as flexible nor as comprehensive as legislative acts. The 2010 cap-and-trade program would have required any firm emitting carbon dioxide, or other regulated greenhouse gas emissions, to abide by permits limiting the amount of pollutants released. The firms would have maintained the freedom of choice in determining the best mechanism of lowering emissions, as well as the freedom of buying and selling permits at market prices—thereby incentivizing lower emissions without forcing firms to pass the financial burden onto consumers. The proposal wasn't radical and minimized governmental interference while promoting innovation in the private sector, yet partisan politics killed the deal.

In an unexpected move, President Obama called for a renewed pursuit of market initiatives to address the carbon-heavy diet of the American economy, a sure sign of a re-commitment to comprehensive reductions in greenhouse gas emissions. The cap and trade and other market initiatives must be the centerpiece of any energy policy, although Mr. Obama skirted stronger calls to action on committing to renewable energy. The State of the Union provided glimpses of what could be a pragmatic—but not progressive enough—climate change strategy coming from the White House. Stay tuned to see whether 2013 will be the year of climate success, or the return of 2010-style inaction.

Hannah Locke is a senior fellow in Energy and the Environment at the Roosevelt Institute Campus Network, a student-driven progressive policy organization mobilizing Millennial students to be agents of change.