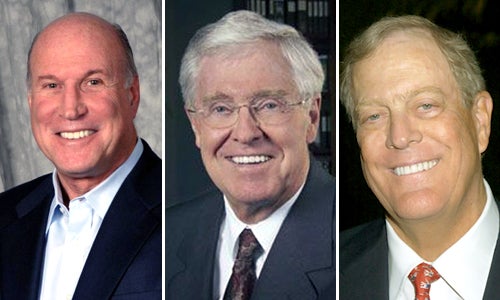 When the Western Energy Alliance in June invited K-Street mugger Richard Berman to advise them on how to deal with public opposition to oil and gas extraction, Berman’s back-alley style can hardly have surprised those who invited him. His tactics and viciousness have been broadly reported in the media, and blasted even by his own son. CBS’s 60 Minutes called him Dr. Evil. 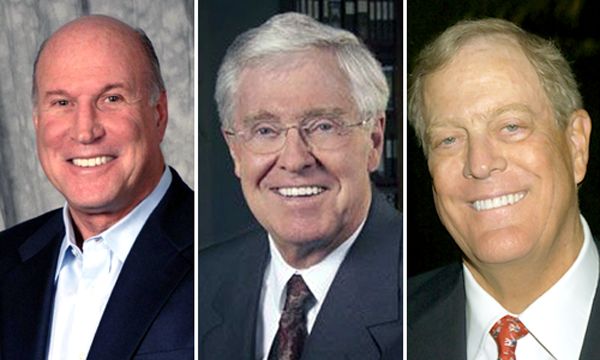 Richard Berman, Charles Koch and David Koch. So we need to understand that however many oil and coal companies do decide to play clean, there will be others willing to “win dirty,” and that unless we can find ways to limit their political clout both communities and the environment will continue to be devastated in the name of carbon profits.

So it should not have been a surprise when Berman summed up his philosophy by telling the industry you can either “win ugly or lose pretty.” Winning ugly includes tactics like digging up personal dirt about your opponents, discussing “how he had done detailed research on the personal histories of members of the boards of the Sierra Club and the Natural Resources Defense Council to try to find information that could be used to embarrass them.” (As far as I can tell, Berman is either inept at this tactic or environmental board members are stunningly virtuous people, because there is no public record of any serious embarrassment resulting).

What may have surprised Berman, however, was that someone in the audience not only recorded his remarks but was sufficiently appalled to leak them, so you can read it all in its ugliness. Anadarko Petroleum, to its credit, has distanced themselves from Berman, saying “Anadarko did not support Mr. Berman’s approach and did not to participate in his work because it does not align with our values.” Unfortunately, it appears that Berman may still have raised $3 million from other oil and gas companies for his latest endeavor, “Big Green Radicals.”

But Richard Berman was not the only poster child last week for the reality that fossil fuel extraction and democracy are a poor fit. And oil is not the only villain. In Kentucky, a coal mine operator who is also a member of the legislature, Rep. Keith Hall, was indicted in U.S. District Court for bribing a mine inspector to ignore safety violations at Hall’s surface mining operations. Hall is charged with paying the inspector $46,343 over eighteen months to ignore repeated environmental and safety violations, but at some point apparently decided he had paid enough.

Halls ex-wife commented “Kelly was the inspector on Keith’s mines … I remember one time when we were in Frankfort, Keith said he had paid Kelly $10,000 already, but Kelly was saying Keith owed him another $10,000, or $20,000 altogether. Keith said Kelly was just aggravating him to death about it, he just wouldn’t drop it. And then I knew they weren’t friends anymore.”

What did Kelly agree to cover up for Hall: unresolved citations for dropping rocks on nearby homes; mining outside of permitted areas; water pollution; failing to obey regulations on blasting, reclamation and maintaining slurry ponds; and allowing rocks, dirt and trees to slide down slopes.

Nor is the problem unique to the U.S. In India, Jindal Iron and Steel conceded that the Indian federal police were investigating the company for paying bribes for the right to mine coal from public lands in the state of Chattisgarh. And to the south, in Sri Lanka, a parliamentary inquiry explored the urgency of identifying who was responsible for importing sub-standard coal for power plants and pocketing the profits.

This is a pretty good crop of corruption for a single week—meanwhile, on the legal side of the democracy-subversion ledger, the oil industry continued to pour funds into U.S. elections in ways that staggered even highly jaded political reporters. Chevron’s investment in the Richmond city elections climbed more than the $3 million mark, prompting the San Francisco Chronicle to comment, “Chevron has spent $72 per registered voter in Richmond—more than a minimum wage worker brings home after a full day’s work in this blue-collar city.” And overall the oil industry has now reported pouring $7.5 million into defeating three anti-drilling ballot measures in three counties whose combined population is substantially less than one million. And that doesn’t even count the flood of oil and Koch related money preventing the auto companies from buying advertising time for the new model year in the nine key Senate swing states where up to 50 percent of the total add buy is now political, thanks to the Supreme Court.

So why is it that extracting coal, oil and natural gas so often ends up being at odds with the rule of law and the premises of democracy? Is Richard Berman right—does the industry have a choice between winning dirty and losing clean?

Well, let’s begin with the basic reality. Oil, gas and coal are lucrative, very lucrative businesses, but only if two conditions are met. You have to get permission, in some form, to extract them, and almost all of the world’s coal and oil are owned by governments, publics in theory—so getting favorable lease terms is a huge windfall for the companies that can arrange—negotiate—or obtain through bribery those rights, ideally at very cheap royalty rates. Here in the U.S., just look at the give aways of Powder River Basin coal in closed bidding processes, or the scandalous Gulf of Mexico lease deals awarded by Congress a decade ago and never remedied.

And then you have the problem that drilling or mining for fossil fuels involves enormous risks and costs to neighbors and communities—ranging from long range air toxins in their lungs to the actual destruction of farmer’s fields by strip mining. These communities and stakeholders will resist—and they have the power of public sentiment on their side. So the second fundamental problem that faces a coal or oil company is how to override local resistance, or local demands for compensation for the damages which unavoidably flow from coal and oil development for other stakeholders like farmers, fisherman and residents.

There are two models for solving this problem. One is genuinely voluntary market transactions, in which other stakeholders accept the compensation they receive for the damages imposed. But in many cases paying proper compensation would drastically erode—or even eliminate—the profit potential from coal, oil and gas production.  In some cases clearly local people would not accept any likely level of compensation—so the companies in that case do face Berman’s “lose clean” scenarios. Much of the world’s coal, oil and gas cannot be developed with the full compensation of or voluntary consent from local communities.

Evidence of this dilemma can be found in India, where iconic social activist Medha Patkar, who first came to prominence in her campaign against uncompensated dislocation of local populations to construct the Narmada Dam, has now joined the global campaign to persuade the World Bank to restore recently gutted policies designed to ensure that Bank funded projects do not ride rough shod over the right of local communities.

So that leaves an opportunity: national governments often want the revenues the oil companies will pay for developing those resources, and if oil and coal companies unwilling to “win dirty” refuse to engage in those situations, there have always been plenty of firms willing to play by whatever rules local elites (not publics) establish.

So John D. Rockefeller and his fellow Appalachian coal barons, the templates for the ruthless fossil fuel moguls, do not lack successors—best exemplified in the U.S. today by the Koch Brothers.

So we need to understand that however many oil and coal companies do decide to play clean, there will be others willing to “win dirty,” and that unless we can find ways to limit their political clout both communities and the environment will continue to be devastated in the name of carbon profits.