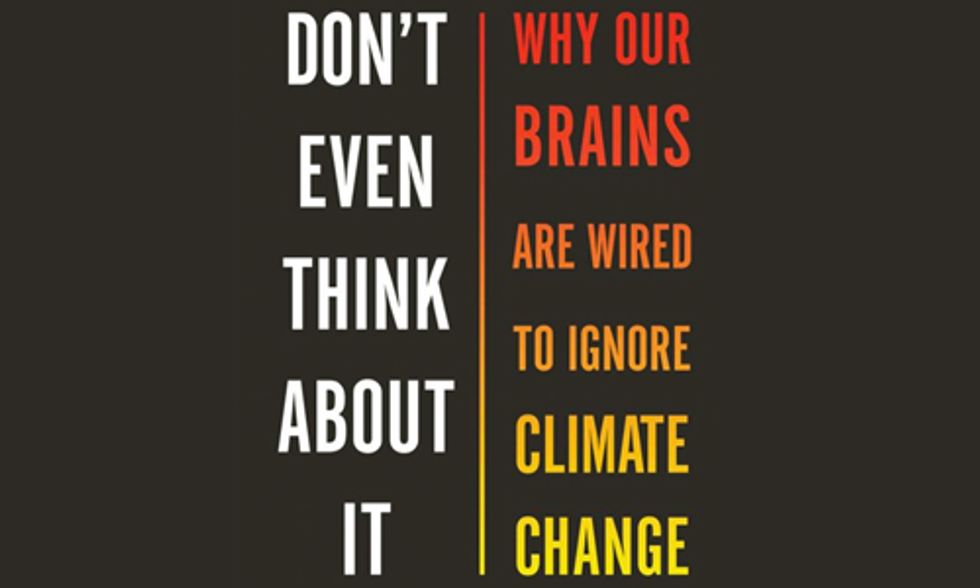 If you don’t like the message on climate change, it seems that the answer is to shoot the messenger.

According to a new book by veteran environmentalist George Marshall, thousands of abusive emails—including demands that he commit suicide or be “shot, quartered and fed to the pigs, along with your family”—were received by climate scientist Michael Mann, director of Pennsylvania State University’s Earth System Science Centre, who drew and published the “hockey stick graph” that charts a steep rise in global average temperatures.

Glenn Beck, a commentator on Fox TV, called on climate scientists to commit suicide. A climate denial blogger called Marc Morano claimed that one group of climate scientists deserved “to be publicly flogged.” And the late Stephen Schneider found his name and that of other Jewish climate scientists on a “death list” maintained by an American neo-Nazi website.

As Marshall points out in his absorbing, all-embracing, immensely readable book, Don’t Even Think About It: Why Our Brains are Wired to Ignore Climate Change, something very strange is going on.

Louis Pasteur’s revolutionary microbiology work on disease prevention never resulted in him having to think about how to use a gun. Jonas Salk never needed to fortify his house as result of working on the development of a polio vaccine.

Other scientists are trusted and respected. But the way climate scientists are now treated, Marshall argues, is without parallel in the history of science: “They have been set up to play that role in a climate storyline that, it would seem, cannot refute climate change without demonising the people who warn us about it.”

Forget, if you can, the people who seem to be whipping up these furious responses. Climate change can only be met or mitigated by action—and there are plenty of reasons why a very large number of people nod in agreement about what must be done and then fail to insist that it is done.

Dan Gilbert, a psychologist who won the Royal Society’s science book prize in 2007 with an examination of the puzzles of happiness, says that climate change is something unlikely to strike fear in the human heart anyway. It is impersonal, it is gradual, it is amoral and it isn’t—or doesn’t seem to be—happening now.

Other researchers have pointed out the alarming tendency, shared by all humans, to believe what they want to believe. Furthermore, climate change is not (death threats and public flogging fantasies aside) an immediate or an emotional issue. “A distant, abstract, and disputed threat just doesn’t have the necessary characteristics for seriously mobilising public opinion,” says the Nobel laureate, Daniel Kahneman.

There are other difficulties. When, for instance, will the awful things start to happen? How do you mobilise public opinion on an argument with uncertain timescales, imprecise outcomes and real puzzles about the costs and benefits of any actions? No one, Marshall says, is ever going to march under a banner of that says “100 months before the Odds Shift into a Greater Likelihood of Feedbacks.”

Marshall founded the Climate Outreach and Information Network (COIN), based in Oxford, England. He is a veteran of Greenpeace and the Rainforest Foundation, and there isn’t much doubt about what he thinks and knows to be true.

But the appeal of this book is that he lets others talk. He examines the political doublethink that seems to infect some legislatures in the U.S. He listens to the skeptics, the worriers, the oil giants, the conspiracy theorists, the celebrity environmental campaigners and the other ones who invoke imagery of death, fever and smoking ruin.

And he refers to the University of Oxford’s Future of Humanity Institute, which polled academic experts on global risk, and found an estimate of a “19 percent probability that the human species will go extinct before the end of the century”.

The title, direction and burden of this book seem to augur almost apocalyptic failure to confront the coming crisis. But, of course, Marshall pulls out an ace near the end.

He concludes that while human brains may be hard-wired to not worry about what may or may not happen in two generations, they also have an immense capacity for pro-social, supportive and altruistic behavior.

“Climate change is entirely within our capacity for change,” he says, “It is challenging, but far from impossible.”

That is good to know. And the book ends with some serious advice about how to make the case for action—and instead of capital punishment, we get generously shouty advice in capital letters. CLIMATE CHANGE IS HAPPENING HERE AND NOW, he reminds us. And he urges campaigners to DROP THE ECO-STUFF, especially the polar bears.

Marshall suggests that we really do try to contain global average warming to 2°C. He quotes John Schellnhuber, director of the Potsdam Institute for Climate Impact Research, who told the Australians: “The difference between two and four degrees is human civilization.” And, yes, do think about it.