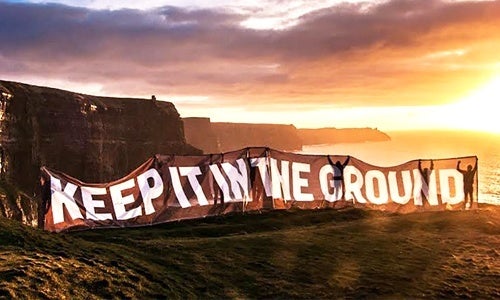 This has truly been a landmark year for grassroots environmental action. In the past four months alone, people power has derailed Shell’s Arctic drilling plans, driven the Obama Administration to cancel Arctic oil and gas leases for the next two years, won the fight against the Keystone XL pipeline and exposed Exxon’s decades-long climate denial campaign.

All of this adds up to some serious momentum for the climate movement. To make the most of it in 2016, let’s seize this moment to keep all fossil fuels in the ground. 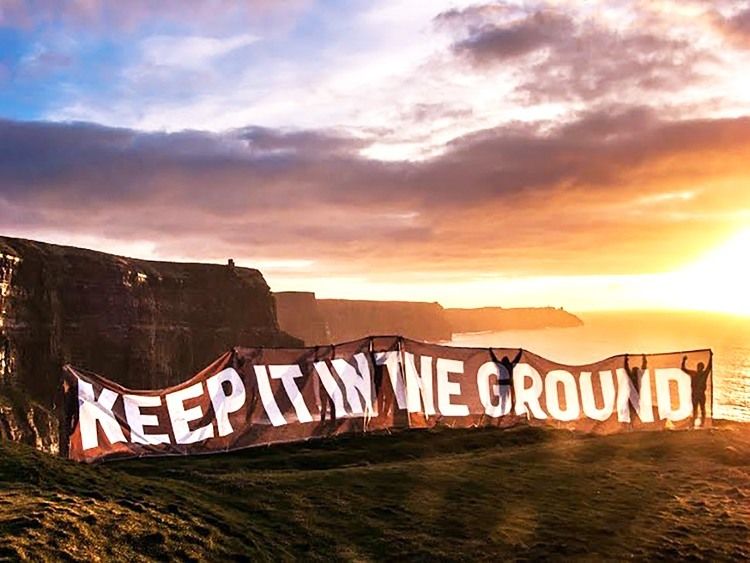 Activists hold a “keep it in the ground” banner on the Cliffs of Moher in Ireland. Photo credit: Eamon Ryan / 350.org

The science is clear: the path to a sustainable future for people, wildlife and the climate does not include fossil fuels.

In fact, a study published in the journal Nature earlier this year specifies that we need we cannot afford to burn a majority of the world’s known fossil fuel reserves—including more than 90 percent of U.S. coal and all of the oil and gas in the Arctic—if we hope to avoid catastrophic climate change.

Given this science, investing billions of dollars in new fossil fuel exploration and infrastructure—as Shell did during its failed Arctic drilling project—makes absolutely no environmental or economic sense.

And it’s not just burning fossil fuels that’s a problem. The processes of extracting, transporting and refining fossil fuels wreaks havoc on public health and our natural landscapes. Unsurprisingly, marginalized groups—especially low-income communities of color and indigenous peoples—suffer the brunt of these environmental injustices.

Momentum is on Our Side

On the heels of fights like Keystone and #ShellNo, the grassroots environmental movement has never been more united or empowered than it is right now. The incredible organizing that went into these victories serves as a powerful foundation for doing even more and winning even bigger in 2016.

These grassroots wins are turning into the kind of political momentum few thought was possible even a year ago (just in time for global climate negotiations in Paris happening right now).

In rejecting Keystone, the president himself acknowledged that “we’re going to have to keep some fossil fuels in the ground.”

And recently, seven Democratic senators—including presidential candidate Bernie Sanders—introduced the Keep It in the Ground Act. The legislation would ban all fossil fuel leases on public lands, a key move given the Interior Department’s recent track record.

Forty percent of the coal mined in the U.S. and huge amounts of oil and gas, are managed by the Interior Department. And despite the popular will to move away from fossil fuels and towards clean energy, it recently authorized the potential sale of 10.2 billion tons of coal from our public lands.

That’s pretty bad, but it doesn’t stop at coal. Fossil fuel corporations are also targeting millions of acres of public lands and waters for fracking and oil drilling.

By ending all new leasing of publicly owned oil, coal and gas, the Obama administration could keep more than 450 billion tons of carbon pollution in the ground, nearly 12 times the amount of carbon pollution the world emitted into the atmosphere in 2014.

All Eyes on President Obama

In Paris last week, President Obama included the fact that the U.S. has “said no to infrastructure that would pull high-carbon fossil fuels from the ground” as one of his administration’s most important actions on climate.

It’s clear that the president intends to use his final year in office to forge a legacy of climate leadership. To earn this distinction, he’s going to have to say no more often.

Join the movement for climate action: tell President Obama to keep it in the ground today.