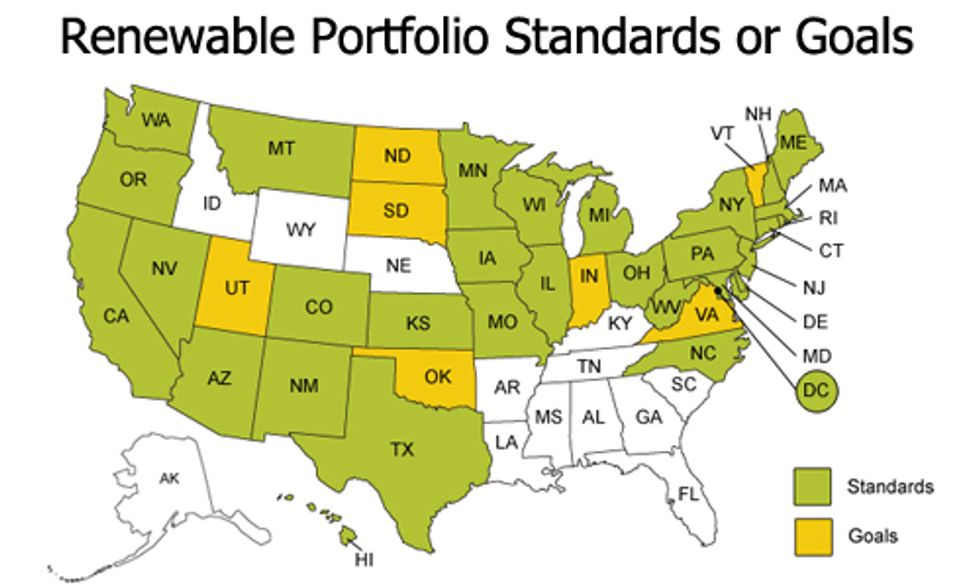 Though nonprofit organizations and educators have recently touted clean energy as an alternative to carbon-polluting fossil fuels, a new report shows the lengths others have gone to prevent the growth of renewables.

The latest report from ProgressNow details how the American Legislative Exchange Council (ALEC) attempted to curtail renewable portfolio standards (RPS) in states across the country in 2013, to no avail.

"In contrast to economic rationality, and in defense of its corporate benefactors, ALEC attacked RPS throughout the states," the report reads. "[Thirty-seven] bills throughout the nation sought to roll back the nation’s varied RPS policies. ALEC’s bill failed to eliminate any standard, while four states even increased their standard."

Bold and italicized names indicate the primary sponsor is known to have ties to ALEC. Graphic credit: ProgressNow

Those standards establish minimum requirements for renewable use at state utilities. ProgressNow and the groups that support the organization found that ALEC set the stage for its rollback attempts a year ago in Salt Lake City, where it hosted an Energy, Environment and Agriculture Task Force (EEA) meeting with "the top echelon of fossil fuel interests and alternative energy opponents."

ALEC's Electricity Freedom Act was birthed at that meeting by fossil fuel titans looking to eliminate legislation in 29 states that had previously set various percentages and wattage amounts of renewable energy to be used by utilities. Officials at Koch Industries and Exxon Mobil are among those listed on ALEC's Private Enterprise Council.

The Electricity Freedom Act characterized RPS as "essentially a tax on consumers of electricity that forces the use of renewable energy sources beyond what would be called for by real market forces." Most of the anti-RPS legislation failed to make it beyond the introductory stage.

"They have almost no success," said Brian Wietgrefe, national research director at ProgressNow, told Huffington Post. "It's because it works—the policies work."

The report also shows efforts in several states to allow fracking companies to exclude chemical ingredients from their reports to state agencies, deeming them "trade secrets."

Bold and italicized names indicate the primary sponsor is known to have ties to ALEC. Graphic credit: ProgressNow

"[The Disclosure Of Hydraulic Fracturing Fluid Composition Act] is a Trojan horse," the report reads. "Using the guise of disclosure, the bill creates a loophole. Instead of the companies actually being required to disclose the chemicals, it effectively allows fracking corporations to disclose the information they want to disclose.

"And because the bill is not retroactive, and 1.1 million wells have been fracked since 1949, many operators will never have to disclose anything about what is present due to the fracking process."

Connor Gibson, a researcher at Greenpeace, pins the failure of ALEC-supported rollbacks on a simple observation—people like the benefits of renewable energy.

"It's very clear that people are being employed in part due to these incentives," Gibson said. "When people start seeing solar arrays [and] wind farms that are employing people in their districts, it becomes hard to roll back incentives."