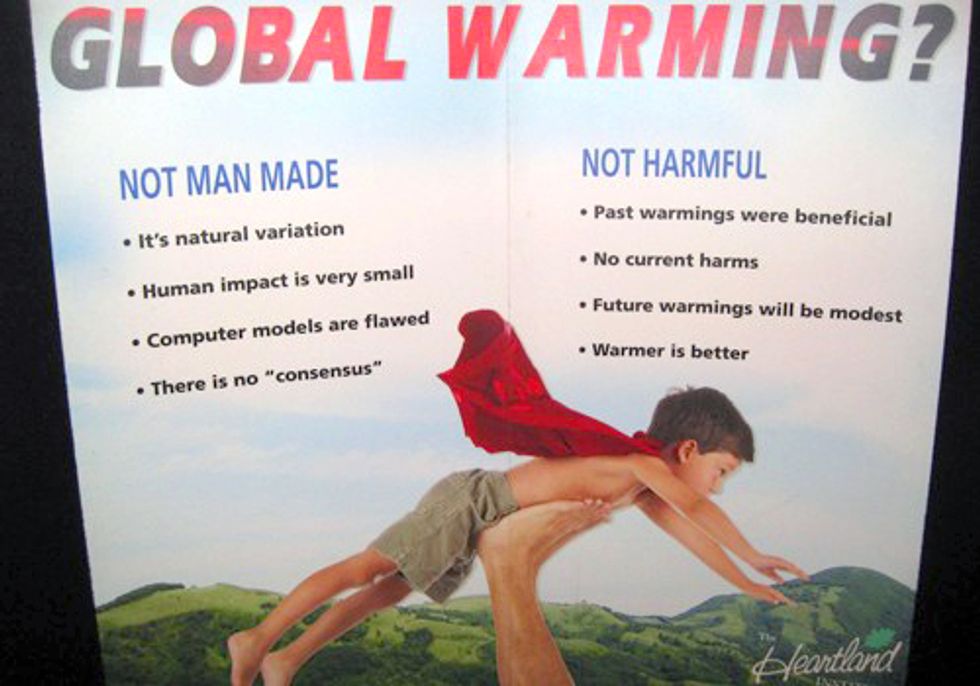 It was not probably the Valentine’s present the leading climate skeptic organization, the Heartland Institute, was expecting.

But after years of exploiting ClimateGate and leaks from climate scientists, on Feb. 14 they were on the receiving end of their very own leak.

The documents confirm what many people have suspected for a while—That Heartland not only receives money to fund its own climate skeptic work, but it also funds other leading skeptics, such as Craig Idso, who gets $11,600 per month and Fred Singer who receives $5,000 per month, plus expenses.

Heartland is also spending a whopping $388,000 for a team of skeptics to undermine the findings of the UN climate body—the Intergovernmental Panel on Climate Change.

One of the documents leaked is Heartland’s Fundraising plan for this year, which exposes some of the world’s best known companies, such as Altria (parent company of Philip Morris) Bayer, Eli Lilly, General Motors, GlaxoSmithKline, Microsoft, Pfizer and Time Warner, as funding the climate denial movement.

The Fundraising plan also reveals that the Koch Brothers are once again funding the Institute’s global warming disinformation campaign. Up until Feb. 14 it was thought that the last funding was more than a decade ago.

One leaked document, the January 2012 Confidential Memo—2012 Heartland Climate Strategy states: “We will also pursue additional support from the Charles G. Koch Foundation. They returned as a Heartland donor in 2011 with a contribution of $200,000. We expect to push up their level of support in 2012 and gain access to their network of philanthropists, if our focus continues to align with their interests. Other contributions will be pursued for this work, especially from corporations whose interests are threatened by climate policies.”

So here is confirmation in writing what many people have known for years—that the Heartland Institute is effectively acting as a front group for big oil and energy, raising money from companies which are threatened by climate policies, so that it can essentially do their dirty work in undermining legislation that threatens their corporate bottom line.

And in that sense, the boys from Heartland are guns for hire.

And this is where it gets interesting. The documents show that Heartland’s climate change denial machine is chiefly funded by one donor, who is just called “Anonymous." Their identity is not disclosed in the confidential documents. But the accounts reveal that this one donor has donated $13 million to Heartland’s climate denial work over five years, with another $1 million planned this year.

For one person to have such a huge influence on a key climate skeptic think tank is both interesting and worrying. For years the climate skeptics have operated to clear double standards. On the one hand they have repeatedly argued that climate scientists must be transparent with their work and have inundated them with Freedom of Information requests, but at the same time they have refused to come clean over who funds them.

Surely it is now beholden on the Heartland to come clean and tell everyone who their “key Anonymous Donor” is?

In the interests of transparency and credibility, it is the least the Heartland Institute can do.