Who Pays the Real Cost of Exxon's Climate Deception? 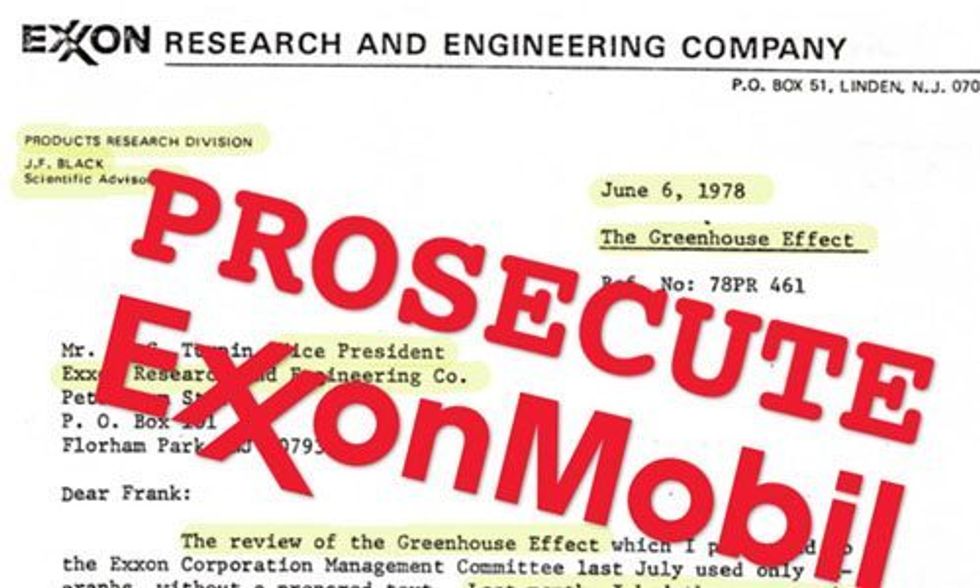 New York state attorney general Eric T. Schneiderman is investigating ExxonMobil to determine whether the corporation lied to the public about climate change, or to investors about the risks to the oil industry. A subpoena was issued last Wednesday, demanding extensive financial records, emails and other documents.

Exxon knew about global warming decades ago (and in fact launched its own extensive climate research program), yet spent US$30.9 million to support think tanks running climate denial campaigns from 1998 to 2014.

A common misconception about climate change is that we are all responsible for the problem, and therefore no one is responsible. However, a scientific study revealed that two-thirds of the carbon dioxide emitted the Industrial Revolution can be traced back to just 90 oil, coal and gas producers, dubbed the “Carbon Majors.” Exxon is the world’s second biggest polluter, according to the study, contributing 3.1 percdent of the carbon dioxide that has accumulated in the atmosphere. If New York finds that Exxon has indeed deceived the public and investors, this investigation will have significantly bolstered Exxon’s liability for the climate crisis.

Exxon has also been targeted in a recent climate lawsuit. The communities that suffered the horrific impacts of Typhoon Haiyan in the Philippines have brought a case alleging that the contribution of the biggest fossil fuel corporations to climate change is a violation of their human rights. The 50 respondents include Exxon, Chevron, BP, Royal Dutch Shell, Total, BHP Billiton, Anglo American, Lafarge, Holcim and Taiheyo Cement Corporation.

In 2013, Typhoon Haiyan displaced 4 million people, destroyed or damaged 1 million houses, and killed at least 6,300 people. While the Philippines suffered a financial blow of approximately US$10 billion from the storm, Exxon made US$32.6 billion in profits. Yet the oil giant has not paid for the climate damage caused by its products. Chevron, the corporation with the most responsibility for carbon emissions, made US$21.4 billion that year. Big Oil is making a killing.

The UN Guiding Principles on Business and Human Rights state that corporations must respect human rights, in compliance with both national and international legal standards. Yet the fossil fuel industry is fueling climate change, and has failed to prevent the human rights impacts directly linked to its activities.

Kick Big Oil, Coal and Gas Out of Climate Policy

Politicians have also failed to hold the industry responsible. Instead, these corporations receive obscene subsidies from the same governments that are meant to protect their people and their human rights. The IMF has found that the industry is supported by as much as US$5.3 trillion in subsidies, or $10 million per minute.

Exxon has clearly indicated that it plans to continue producing fossil fuels without limit, stating that serious emissions cuts are “highly unlikely.” And so far, the untold millions spent by Big Oil and Gas to block strong climate policies and other regulations—in 2014, the industry spent US$141 million lobbying in Washington, DC—have indeed been highly effective.

Fossil fuel corporations have long been treated as “stakeholders” at the UN climate negotiations, and they have used this position to push false solutions and ensure that no effective action is taken. A decade ago, the international community established a powerful precedent by removing Big Tobacco from public health policy through a treaty mechanism. It is now time to kick Big Oil, Coal and Gas out of climate policy.

A New and Innovative Source of Finance

Solutions are urgently needed to address this gross injustice, and particularly the impacts of climate change on the world’s poorest communities. A global levy on the extraction of fossil fuels could raise US$50 billion a year to help fund the international Loss and Damage Mechanism. The 13 largest fossil fuel corporations alone made $132 billion in profits in 2013.

This funding would be used to assist the most vulnerable, those already suffering the worst impacts of climate change. Existing international law supports such a system—especially the polluter pays principle, the “no harm” rule, and the right to compensation—and it needs to be part of a general phase out of fossil fuels.

Exxon’s climate deception comes at the cost of the lives and human rights of people around the world and of future generations to come. To genuinely face this crisis, we must find the strength to kick the fossil fuel giants out of the climate negotiations, and to make the industry pay for its climate damage.

Dr. Keely Boom is an Indigenous Australian and a lawyer. She is executive officer of the Climate Justice Programme. Dr. Boom holds a PhD in international climate change law.