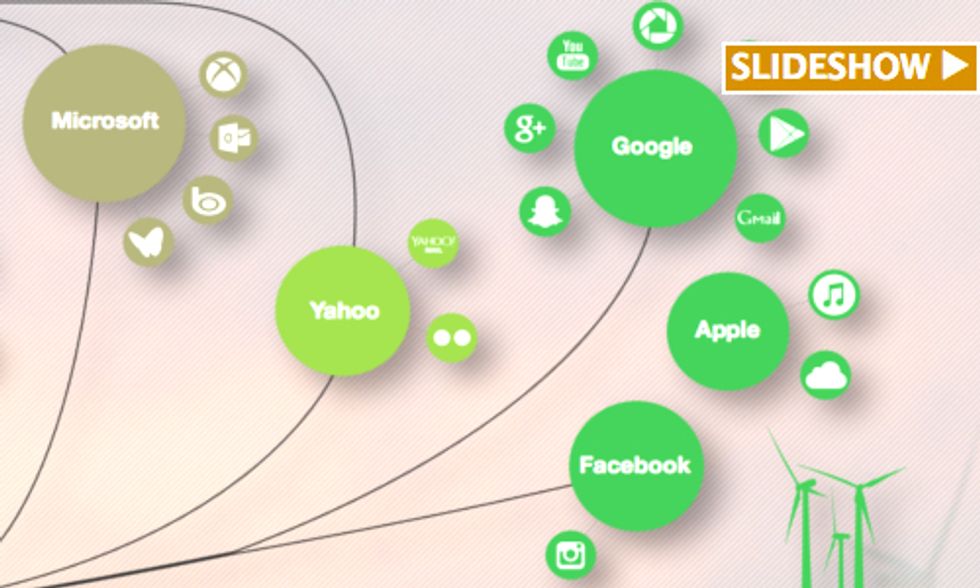 When reading or opining online about the energy consumed by homes, cars and power providers, it's easy to overlook the amount of electricity the Internet itself requires.

According to a new Greenpeace report, the Web would rank sixth in energy demand if it were a country. The amount of Internet data out there is expected to have tripled from 2012 to 2017. In that time, the Web population is expected to grow from 2.3 billion in 2012 to 3.6 billion people by 2017, or half of the world's population.

With that sort of virtual volume on deck, Web companies have to become greener.

In Clicking Clean: How Companies Are Creating the Green Internet, Greenpeace researchers make it clear which companies are leading the movement and which ones are still relying on fossil fuels.

Greenpeace evaluated the energy choices of 19 familiar Internet companies and more than 300 of their data centers. Five of those firms have announced a goal of powering their operations with 100-perecent renewable energy.

“Apple, Facebook and Google are powering our online lives with clean energy, and building a greener offline world for everyone in the process,” Gary Cook, a Greenpeace senior IT analyst, said in a statement. “These companies have proven over the past 24 months that wind and solar energy are ready and waiting to power the internet, and the rest of our economy, with clean electricity."

While all three companies are known for the renewable energy investments of recent years, Greenpeace particularly singled out Apple, the only company to earn a 100-percent score on its four-category Clean Energy Index. The company powers facilities like its Reno, NV data center with all clean energy, despite the local utility's resource mix being more than half comprised of natural gas. The same goes Apple's facility in Maiden, N.C., where 57 percent of the local mix is made up of nuclear energy.

Apple's North Carolina data center, which is home to the iCloud service, is powered by the largest privately owned solar installation in the country. Amazon and eBay, on the other hand, received 15 and 6 percent, respectively, on their indexes.

“Apple’s rapid shift to renewable energy over the past 24 months has made it clear why it’s one of the world’s most innovative and popular companies,” Cook said. “By continuing to buy dirty energy, Amazon Web Services not only can’t seem to keep up with Apple, but is dragging much of the internet down with it.”

In the organization's own words, here is what Greenpeace wants all "major" Internet companies to do: