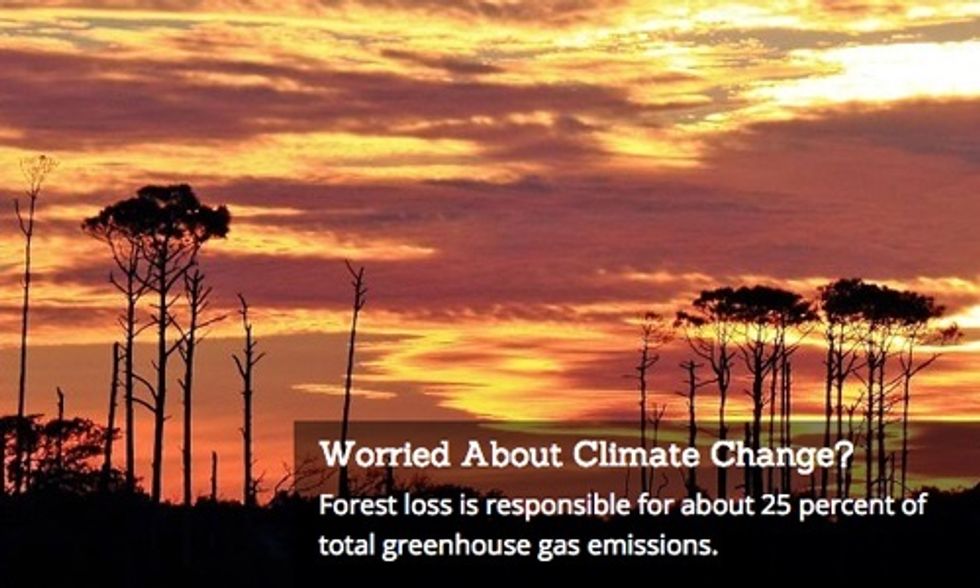 The UN climate conference, to be held in Paris in December, represents the culmination of decades of complex climate negotiations that began in 1992. The COP21, as the conference is known, may well be the endgame—our last, best chance to achieve a global, legally binding climate agreement.

We desperately need an agreement in order to curb fossil fuel emissions, put a price on carbon and drive investments in climate-smart practices and technologies. But a Paris treaty must take a much bolder approach than simply reducing fossil fuel emissions. In most of the world—nearly 60 developing countries—deforestation and agriculture generate far more greenhouse gas emissions than the burning of fossil fuels.

How land is used—agriculture, forestry and other land-altering activities like suburban sprawl and mining—is therefore a key piece of the climate puzzle. Land use accounts for nearly a quarter of global greenhouse gas emissions, including approximately 10 percent from clearing forests for crops and grazing and another 10 to 12 percent from conventional methods of tilling the soil, raising livestock, applying chemical fertilizers and burning fields. These emissions could be greatly reduced through more sustainable practices.

Our decisions regarding land use have lasting and profound consequences. Reckless development can lead to major carbon emissions, while smart conservation strategies create important opportunities to fight global warming. Healthy forests and ecosystems actually pull carbon out of the atmosphere and store it in trees, plants and soil. Forests have the potential to capture and store 10 to 14 percent of gross carbon emissions from the atmosphere, while the land sector as a whole could sequester more than 25 percent.

At this juncture, the world needs developing countries with intact tropical forests to make a huge, positive contribution to fighting climate change by conserving their workhorse ecosystems. This despite the fact that developed countries like the U.S. are among the world’s biggest polluters, past and present; for example, the average per capita carbon emissions in Latin America are about one-seventh of U.S. per capita emissions.

Yet while tropical forests in the global South store the most carbon and harbor the most biodiversity in the world, they’re also under the greatest pressure to be cleared for timber and agriculture to meet the rising demands of our growing global population. And these regions tend to suffer the most from the impacts of global warming, such as climate-related diseases and extreme weather.

Previous COP meetings have foundered over the injustice of this asymmetry between developing countries and developed countries. Yet although this issue is still important, it is no longer as divisive as it once was. There’s now broad consensus that we must fight climate change with everything we’ve got and forward-thinking land use is one of our most powerful tools. The major role forests play in climate protection is now so widely acknowledged that hundreds of major companies have promised to eliminate deforestation from their supply chains (meaning that they’ve pledged to stop sourcing materials from suppliers who cut forests down). Many have signed onto pledges like the New York Declaration on Forests or the Consumer Goods Forum. Of course, there’s much more to protecting forests than simply making a “deforestation-free” declaration, but it is encouraging to see these companies taking action.

COP21 must build on this momentum by defining exactly how to cut emissions and sequester carbon on farmland and forestland. The challenge is for world leaders to find a way forward that balances food security and social and economic impacts—including the livelihoods and rights of people in developing countries—with the demands of a population that is expected to grow to 9.6 billion by 2050.

To fight climate change effectively through land use, we will have to apply a full range of sustainability strategies beyond “zero-deforestation,” including climate-smart agriculture, increased yields and livelihoods for farmers on existing cropland (so they don’t resort to clearing more forest) and economic incentives to keep forests standing. We must also protect water and non-forest ecosystems. Finally, we have to restore lands degraded by irresponsible farming and livestock production. Concerted efforts in these areas could sequester more carbon—but more importantly, they are essential to protecting whole landscapes of viable, interdependent ecosystems.

Better land use is mission-critical for building a sustainable and just global economy—and imperative for protecting the world’s rapidly disappearing forests, habitats and species and as well as to reducing emissions. One of the more hopeful aspects of COP21 is that the delegates heading to Paris recognize this. This time around, land use issues are likely to be consensus-builders instead of deal-breakers.

Jon Stewart: Iranian Nukes Not as Big a Threat as Climate Change