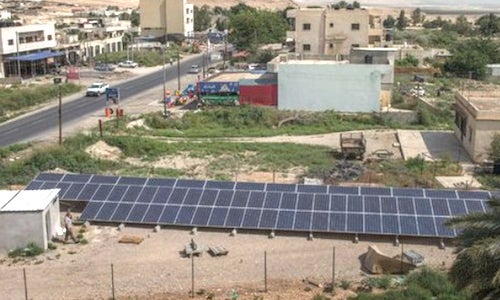 Could a new solar project help promote peace between Israel and Palestine? Build Israel Palestine, a nonprofit involving both Muslims and Jews in the U.S., is building a $100,000 solar array that will help power an underground water pump used by farmers in the village of Al-Auja, which is located in the embattled West Bank.

Project One: Increasing Water Capacity in West Bank is the first large project to be funded by Jews and Muslims in the U.S. and has both Israeli Jews and Palestinian Muslims on the technical team, the New York Times reported.

The solar facility will draw water from subterranean sources to irrigate a grove of palms growing Medjool dates. The project also involves working with agricultural experts on both sides of the border who will provide training in farming to the Al-Auja community.

Importantly, the initiative will help reduce water and electricity costs for the 45 farming families living in Al-Auja, a village of 5,000 Palestinians where electricity is often unreliable and expensive, and water is scarce and expensive to pump.

The New York Times reported that Palestinian farmers are embracing the project on one condition. According to Ben Jablonski, a former Manhattan investment banker and founder of Build Israel Palestine, the farmers insisted that the donors and engineers behind the project have no connections to the Israeli settlements in the West Bank on land Palestinians consider theirs.

According to the New York Times, “water is undeniably scarce in the Jordan Valley, and a longstanding complaint among Palestinians and their supporters is that it is unfairly distributed across the West Bank. A 2009 report by Amnesty International, for example, concluded that the area’s 450,000 Israeli settlers consumed as much as or more water than the Palestinian population of 2.3 million.”

Jablonski, who is Jewish, gave up his board seat with the Jewish National Fund, a nonprofit infrastructure developer linked to some West Bank settlements. He launched Build Israel Palestine in 2014 with Tarek Elgawhary, an Egyptian Muslim religious scholar and the CEO of the Coexist Foundation, an educational nonprofit based in Washington DC. Former New York City Mayor Michael R. Bloomberg is one of the partners.

Build Israel Palestine states on its website that “this model of jointly financing tangible projects benefiting people on the ground will be an example for others to follow.”

“Note, our work is not a substitute for a political solution for the Israeli/Palestinian conflict,” the nonprofit states. “We are doing what we can to help people, which is needed regardless of the political climate.”