VIDEO: Testimony from Ohio Oil and Gas Industry on Safety of Fracking Chemicals 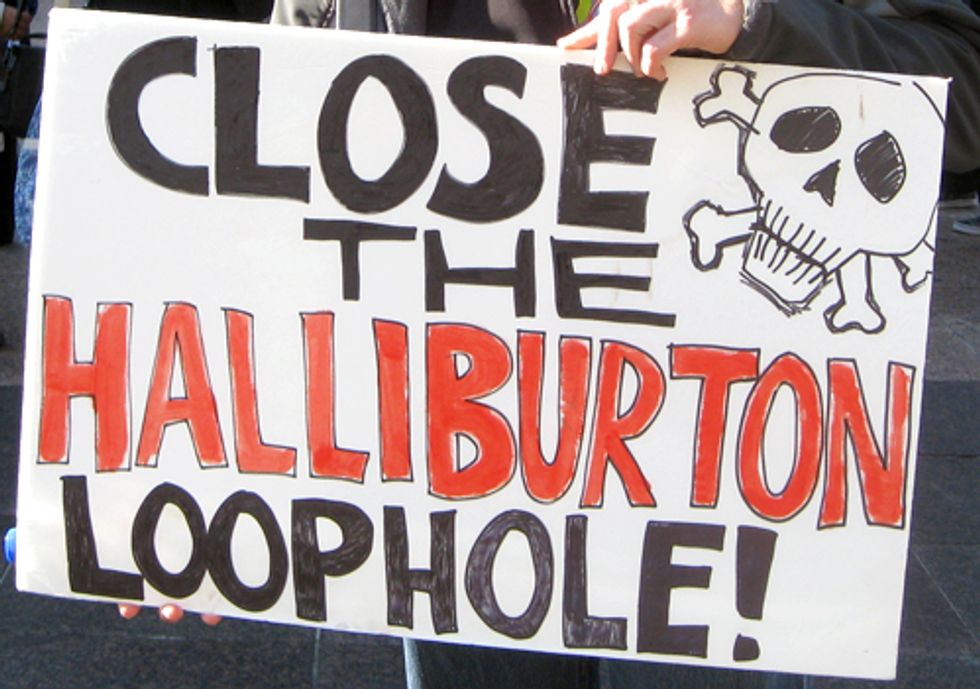 Thomas E. Stewart, lobbyist for the oil and gas industry and executive director of Ohio Oil and Gas Association based out of Granville, Ohio, testified before the Ohio House Public Utility Committee on May 22, concerning Gov. Kasich’s "Energy Bill," Senate Bill 315. Many amendments were offered to SB 315 concerning hydraulic fracturing, including full chemical disclosure, dye tracers, freshwater well testing, local decision making on well placement and background checks for well operators, that would have added much needed protection for Ohioans, but these were disregarded for the most part in favor of a "gag" rule which ties the hands of first responders and doctors in treating anyone affected by a toxic spill or drill site accident.

During questioning, Stewart, who is regarded as an authority on the unconventional method of horizontal hydraulically fractured extraction wells, or fracking, seemed to be unable to directly answer questions about the actual chemicals and the chemical disclosure amendment. It is rumored that Stewart played an important role in advising and writing SB 315 which should indicate a very thorough knowledge and ability to convey various aspects of the hydrofracking process to our legislators, but a video released on his testimony to the Ohio House Public Utilities Commission seems to indicate a reluctance to talk straight facts about the hazards.

In the video, Stewart states that the wells are cleaned with Tide laundry detergent and “Ohio produces, uh, probably the highest quality crude oil known to be produced in the world, it’s uh, Penngrade 38 green oil , it’s highly paraffinic, they actually skim the paraffin off in refineries and make candy out of it, they also make, uh, the coatings on Advil and M&M’s, so when you’re eating your next box of M&M’s, you’re eating crude oil.”

Are we to understand that the leading expert on fracking in Ohio is telling us that chemical disclosure is not needed because the process is so safe that we are eating it when we take pain medication or enjoy a sweet candy treat? It seems that a simple association between common everyday products and the complicated and untested process of hydraulic fracturing was the information our legislators needed to pass SB 315 without legitimate chemical disclosure.

It is true that food grade paraffin is used in many food products, but it seems a stretch to suggest that full chemical disclosure is not needed during the drilling, backflow and production processes. The wastewater generated by these “fracked” wells is toxic and cannot be cleaned to be usable for human consumption or contact. Instead, one method is to inject it into Class II deep injection wells, and according to the industry, tuck it away safely underground forever. The oil and gas industry has been able to keep its chemical cocktail secret under the Energy Act of 2005, nicknamed the “Halliburton Loophole," which also prevents first responders and medical personnel from being able to handle an emergency exposure to the millions of gallons created by each well.

If the company decided that some of the chemical “types” were proprietary trade secrets, then the report would only state the “chemical class to which the component belongs.”

"If it was an organic compound and it was in the alkane family, then that is how they would describe it," said Rick Simmers, chief of the oil and gas division of the Ohio Department of Natural Resources. ‘They are narrowing it down to a family or a type," Simmers said. A class or family could contain hundreds of different chemicals.

This general description is useless for assessing the danger to the public.

In his testimony, Stewart uses this analogy for not being able to reveal the chemicals: “Here’s how a producer gets it to flow again, he goes to the part, to the grocery store and he buys Tide and he puts it down the backside of the well which causes it to bubble up and foam up, lighten the fluid and the well flows. So to ask the question, what do you want me, as a producer, to give you the C.A.S. number of… Tide?"