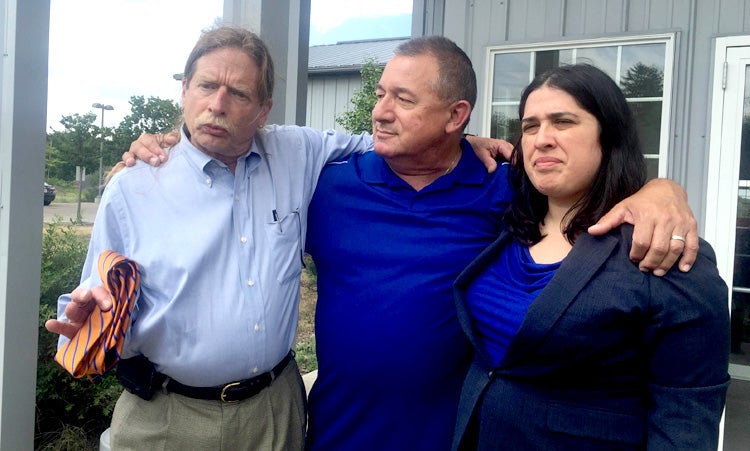 [Editor’s note: In October 2014, over massive citizen opposition and in spite of serious health and safety concerns raised by independent scientists, the Federal Energy Regulatory Commission gave final approval to Houston-based Crestwood Midstream to expand gas storage in unlined salt caverns along the shores of Seneca Lake in the heart of New York’s wine country. The caverns are left over from a century of salt mining. Immediately after the decision, having exhausted all appeals, the grassroots citizen movement, We Are Seneca Lake, began staging protests at gates of the lakeside compressor station. Since then, more than 600 arrests have taken place, many for trespassing. More than half of these cases have not yet been adjudicated. In late 2015, the posted no-trespass signs demarcating Crestwood’s property line were relocated after defense attorneys for the protesters revealed that they were, in fact, posted on public property and that protesters and law enforcement officers were both misinformed about where the actual property line was located. The first trials in the 21-month-long campaign began last week. Tom Angie, whose case is detailed below, was the third protester to face trial. A pretrial motion to present a necessity defense was denied by the Town of Reading Judge.]

The trial of a Seneca Lake gas storage protester ended in dramatic fashion in the Town of Reading Court on Tuesday when Justice Raymond Berry declared a mistrial at the urging of the prosecuting attorneys and accepted a motion from defense attorneys to recuse himself from this and future Seneca Lake protest trials. Berry’s rulings came after a strange series of declarations that appeared to indicate both prejudice against the defendant and ignorance of the law.

Defendant Tom Angie, 63, of Aurora in Cayuga County, was charged with violation-level trespass stemming from a Dec. 16, 2014 protest near the main gates of the Crestwood Midstream compressor station near Seneca Lake in the Town of Reading.

Angie’s trial today—which was to represent the first trial of gas storage protesters in the Town of Reading Court—began at 10 a.m. By 2 p.m., the prosecutor, Schuyler County assistant district attorney John Tunney, who had put on the stand three witnesses, had just rested his case and chief defense attorney Joseph Heath had just entered a motion for dismissal. At this point, Judge Berry abruptly issued a guilty verdict for Angie.

Clearly flummoxed, prosecutor Tunney explained to the judge that his verdict was premature in light of the fact that defendant Angie had not yet presented his defense or called his own witnesses to the stand.

Heath, noting Tunney’s attempt to explain criminal procedure protocols to Judge Berry, respectfully moved that the case be transferred to a law-trained judge. Heath noted that the judge’s premature ruling of guilt at this stage showed a fundamental lack of knowledge of basic criminal law, most notably, the right to present a defense.

Heath further said that the fact that the prosecution needed to stop the trial in order to lecture the judge on “the simplest trial procedures” was clear proof that his clients were unable to obtain a fair trial in this court.

In spite of the fact that the prosecutor had just warned the judge that his ruling was premature, Justice Berry then reiterated his verdict, saying, “I still find him guilty.”

Heath insisted that the trial could only go forward before a law-trained judge, which Berry is not. Heath noted, “The prosecutor is running this trial.”

Sujata Gibson, a second defense attorney, stated that if the judge were going to insist on finding guilt before allowing a defense, then the defendants would simply appeal. She then entered a motion that Berry recuse himself from hearing Angie’s case. She asked that the recusal be extended to all future cases of gas storage protesters.

In making her motion, Gibson described for the record a pattern of prejudice, unfair treatment and blatant bias and provided examples. Among them: courtroom observer Daniel Pautz, who was neither a party to the trial nor an officer of the court, was allowed use of his cell phone in the courtroom while she herself, an attorney for the defense, along with all other courtroom observers, had been forbidden cell phones.

According to witnesses, the Bailiff’s response, when asked why Pautz alone was allowed to have access to his cell phone inside the courtroom was “because he is with Crestwood.”

Pautz, whose legal work focuses on defending property owners against lead paint claims, is an attorney for Crestwood. He was merely an observer in court today.

Justice Berry granted Gibson’s motion and agreed to recuse himself in this and all future trials involving Seneca Lake gas storage protesters.

The prosecution then moved for an official declaration of mistrial. The defense attorneys offered no objection.

Granting the prosecution’s motion for a mistrial, Judge Berry adjourned the court. 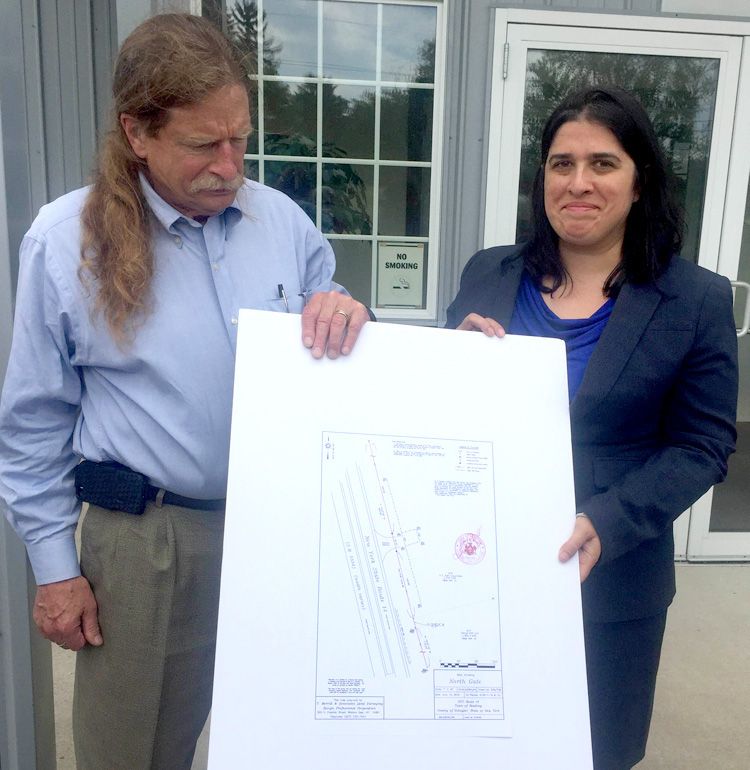 Defendant’s lawyers with evidence that was never presented. Judge Berry proclaimed Tom Angie Guilty, not once but twice before hearing the defendant’s case argued. A mistrial was mutually agreed upon by the prosecution and the defense and was granted.Photo credit: Colleen Boland

In a reaction statement outside of the courtroom, defendant Tom Angie said that while he saw the mistrial and recusal as a victory for We Are Seneca Lake, he was nevertheless deeply shaken by the experience.

“To have somebody look me in the face and say that I was guilty before I had a chance to put on my defense … is chilling. I was not really given my day in court.”

Angie, who works as a mechanical design engineer, said that his time spent on legal defense comes at a personal financial cost. “I’m a contractor. When I don’t work, I don’t get paid, so being hauled into court over and over to defend my First Amendment rights of protest is tough. Like every other average American who wants to exercise my rights, I still have to live. And this affects my livelihood. That concerns me.”

Chief defense counsel Joe Heath noted that, even prior to the judge’s abrupt guilty verdict at the midpoint of the trial, the prosecution had failed to provide evidence that Angie was standing on Crestwood’s property and had already conceded that, at the time of his arrest, the no-trespass signs demarcating the line between public and corporate property were incorrectly located. “In 41 years of practicing law, this is one of the worst mistakes I have ever seen in the courtroom.”

Defense counsel Sujata Gibson hailed both the mistrial and the recusal. “This is a victory for the defense and for We Are Seneca Lake. I firmly believe Mr. Angie is not guilty. This is not a game. Each individual has the right to a fair trial.”

Out of 606 total arrests in the 21-month-old We Are Seneca Lake campaign, 370 cases remain open. The majority of the adjudicated cases have been dismissed in the interests of justice at the prosecution’s request or with their approval, many for admitted lack of evidence of guilt.

Last week, in the Town of Dix Court, Seneca Lake defendants Sue Kinchy and Barbara Barry were both found guilty of trespass.