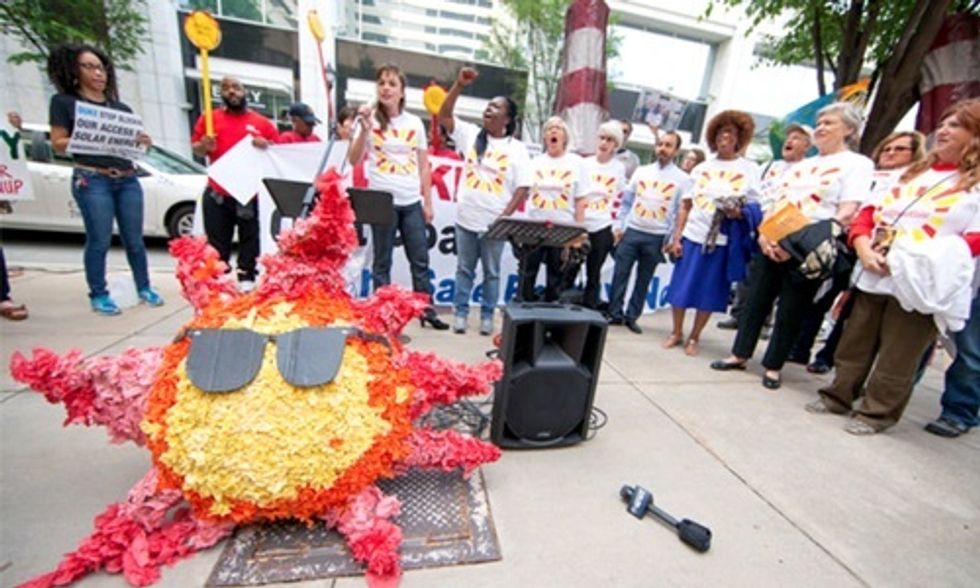 People from North Carolina communities impacted by coal ash joined allies today to demand access to solar and a transition away from dirty coal. Both inside and outside of Duke Energy’s annual shareholder meeting, teachers, faith groups, business leaders, NGOs and residential customers pressed the company to stop dumping toxic coal ash into vulnerable communities, while blocking access to affordable solar that would benefit them in a variety of ways. As the meeting began, community members took their message inside and protested Duke by calling on the company to stop blocking solar energy.

“Duke Energy is destroying my community, my air and water with its toxic coal ash, and has the audacity to simultaneously block access to the clean solar energy that people want and need,” said Michael Carroway, who spoke at a press conference outside the meeting about the impacts of Duke’s coal ash on his hometown of Goldsboro, North Carolina. “Duke has worked hard to misinform my community about solar, but the truth is it’s cleaner and cheaper for everyone. It benefits our health and environment and minimizes the need for more dirty power plants and rate hikes.”

The rally and protest at Duke headquarters were part of a series of actions around Duke Energy’s annual shareholder meeting to send a strong message to the monopoly utility that blocking access to solar, while communities suffer the impacts of toxic coal ash dumping, will not be tolerated in North Carolina or the other states the company serves. On Tuesday, Greenpeace NC flew its Earth-shaped hot air balloon with banners that read: “Duke don’t block solar” and “Solar works for all.”

On the ground below, community members also spelled out “Duke: we want access to solar” in giant white letters. Leading into this week,​​ “clean graffiti” (​a clean message on a dirty sidewalk) with an #IStand4Solar message was ​implemented ​in strategic locations throughout Charlotte.​

“Duke Energy cares about its statewide monopoly and large profits over the people that it serves,” said Danielle Hilton, an organizer with Moms Clean Air Force from Charlotte who spoke at the press conference. “It’s clear that the reason the company is blocking access to clean solar energy is to maintain its stranglehold on the energy market here. Unfortunately, the rest of us suffer for it in the form of rate hikes, coal ash spills and polluted air, which harms our health and the climate."

Duke has actively lobbied the North Carolina state legislature in an attempt to defeat HB 245, the bipartisan Energy Freedom Act, which would open up North Carolina electricity markets to third party sales, meaning companies could offer businesses, schools and residential customers options for no money down solar. Duke opposes the bill because it could mean fewer customers and profits for them, jeopardizing their fossil fuel-based monopoly in the state.

“I think it's important that more people are able to use solar energy because it will mean a healthier world for me and for my children and my children's children,” said 8-year-old Abigail Driscoll from Charlotte who spoke at the press conference. “I hope that Duke Energy remembers that the decisions they make affect me and my family, now and in the future."

8 yr old Abbie at #DukeEnergy :"when I have children and my children have children, the world might not be the same" pic.twitter.com/fJdEEpc8cS

Duke has lobbied against beneficial solar policies in other states as well. Their plan is to limit solar choice via third party energy sales; weaken net metering, or the amount of money solar rooftop customers are credited for adding power back to the grid; and work with allies like the American Legislative Exchange Council and the Koch brothers to gut renewable energy policies and incentives. In Florida, according to a Florida Center for Investigative Reporting story, Duke and other utility companies have spent $12 million on political campaigns for state lawmakers since 2010—directly influencing the expansion of distributed rooftop solar in the state. In Indiana, Duke has used its cozy relationship with regulators and representatives to try to push anti-solar policies, including adding a fee for net metering customers, in an effort to maintain monopoly control in the state.