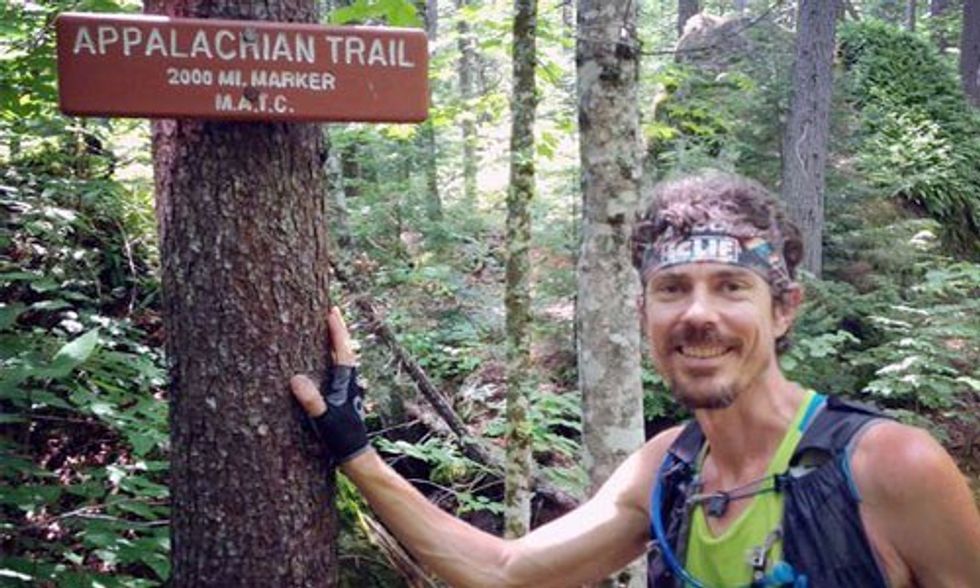 On Sunday, ultramarathoner Scott Jurek became the fastest person to finish a supported thru-hike on the Appalachian Trail, completing the 2,189-mile journey in 46 days, 8 hours and 7 minutes.

The event began on Springer Mountain in Georgia and finished at the summit of Mount Katahdin in Maine. He averaged nearly 50 miles a day, crossing 14 states and traversing 515,000 feet of elevation change, according to Runner's World.

Not only is Jurek an elite athlete, he's also vegan. He's been eating a completely plant-based diet for more than 16 years.

His website explains his transition to a plant-based diet:

While completing his Masters Degree in Physical Therapy from the College of St. Scholastica, Scott continued running and soon began competing worldwide. His growing conviction that processed, low-quality food was keeping his physical therapy clients sick led him to adopt a vegetarian diet in 1997, and a purely plant-based one by 1999. From 1999 to 2005, he notched his unsurpassed string of Western States 100 victories, all on plant-based fuel. In 2001 through 2003, he had the honor of representing the United States on the winning teams in the OXFAM Hong Kong Trailwalker 100K and the Hasegawa Cup Japan Mountain Endurance Run.

Jurek, in his book Eat & Run: My Unlikely Journey to Ultramarathon Greatness, opens up about his life and career to inspire runners at every level. He explains his slow transition to ultrarunning and veganism, and, as he says, "shows the power of an iron will and the importance of thinking of our food as our fuel."

The book is chock full of incredible stories as well as Jurek's favorite plant-based recipes, and, according to Jurek's website, the book "will motivate everyone to 'go the distance' whether that means getting out for that first run, expanding your food horizons or simply exploring the limits of your own potential."

For more information on Jurek and his book, watch here: