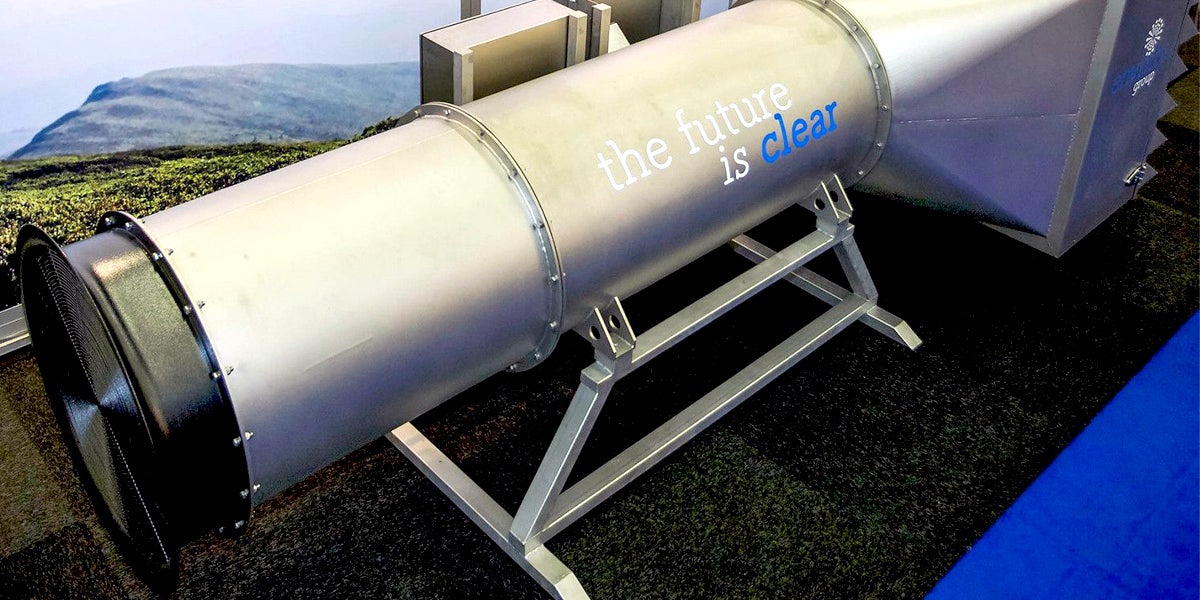 The invention was presented at the Offshore Energy trade fair in Amsterdam on Tuesday.

“It’s a large industrial filter about 8 meters (26 feet) long, made of steel … placed basically on top of buildings and it works like a big vacuum cleaner,” company spokesman Henk Boersen told AFP.

The firm describes their invention as the “world’s first giant outside air vacuum cleaner,” according to AFP.

“A large column of air will pass through the filter and come out clear,” Boersen told AFP.

Envinity claims that their prototype can suck in air from a 300-meter radius and about seven kilometers (4 miles) upwards. Citing tests from the Energy Research Centre of the Netherlands, the impressive machine can clean about 800,000 cubic meters (28,000 cubic feet) of air per hour using patented ozone-free ion technology. As a result, the vacuum can filter out 100 percent of fine particles and 95 percent of ultra-fine particles.

As Envinity states, fine particles and ultra-fine particles are indeed extremely harmful to public health, and can be a hindrance to national, regional and local investments and economic progress.

“Without really being aware of it, we breathe in small quantities of toxic particles from the surrounding air 24 hours a day. These are responsible for a great many health problems,” Envinity notes on its website.

According to Envinity, fine particles, or particles smaller than 10 micrometers, are linked to an increased risk of respiratory and cardiovascular health problems. Ultra-fine particles, which are smaller than 0.1 micrometers, have an even greater impact on public health as they can damage the nervous system, including brain cells and also cause infections in the human body.

These toxic particles are the result of man-made pollution. Unregulated and poorly regulated energy production and use, as well as inefficient fuel combustion, are the “most important man-made sources of key air pollutant emissions,” the International Energy Agency stated. Eighty-five percent of particulate matter—which can contain acids, metals, soil and dust particles—and almost all sulfur oxides and nitrogen oxides can be linked back to those sources.

Boersen said that governments, businesses and airports have already expressed interest in the project.

“It might be a cliché, but we hope that we will be able to leave the world a better place than when we found it,” Envinity Group co-founder Simon van der Burg told Dutch News.