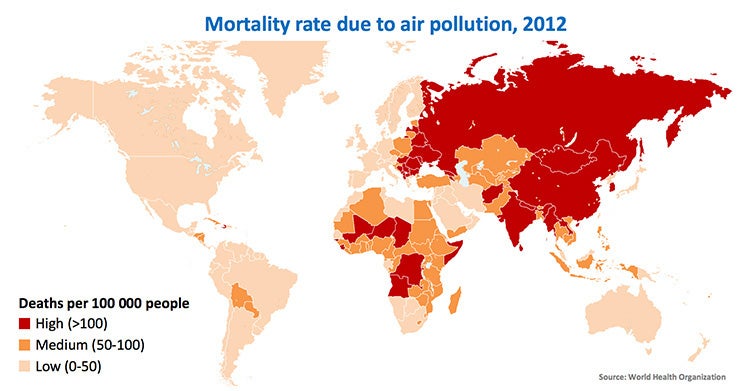 The only items more of a threat to human health than poor air quality are high blood pressure, dietary risks and smoking, Reuters reported. IEA’s report estimates that premature deaths caused by outdoor air pollution will rise from 3 million in 2015 to 4.5 million by 2040, 90 percent of the deaths occurring in developing Asia.

But developed countries aren’t safe from the pollution either. The American Lung Association’s 2016 State of the Air report found 52.1 percent—or 166 million people—of Americans live in counties that have unhealthful levels of either ozone or particle pollution, EcoWatch reported.

“Clean air is a basic human right that most of the world’s population lacks,” Fatih Birol, IEA executive director, said in an agency press release. “No country—rich or poor—can claim that the task of tackling air pollution is complete. But governments are far from powerless to act and need to act now. Proven energy policies and technologies can deliver major cuts in air pollution around the world and bring health benefits, provide broader access to energy and improve sustainability.”

Unregulated and poorly regulated energy production and use, as well as inefficient fuel combustion, are the “most important man-made sources of key air pollutant emissions,” IEA stated. Eighty-five percent of particulate matter—which can contain acids, metals, soil and dust particles—and almost all sulfur oxides and nitrogen oxides can be linked back to those sources.

The air quality outlook, IEA stated, is not set in stone. A 7 percent increase in total energy investment can produce a huge health improvement by 2040. Premature deaths from outdoor air pollution would decline by 1.7 million in 2040. Household pollution related deaths would decrease by 1.6 million annually. 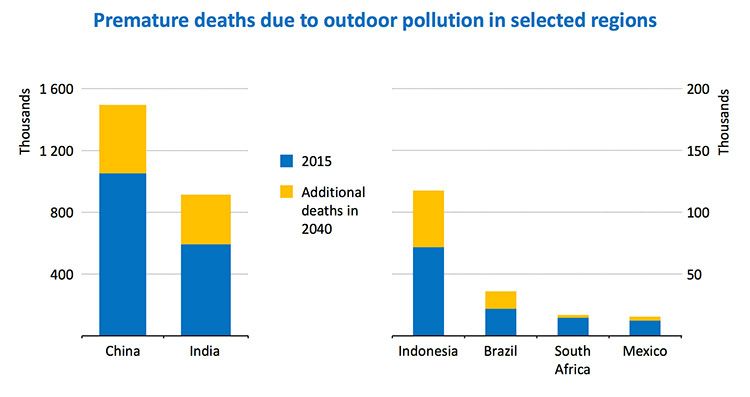 “This is completely peanuts,” Birol told Reuters. “With a seven percent increase you can save over three million lives.”

“We need to revise our approach to energy development so that communities are not forced to sacrifice clean air in return for economic growth,” Birol said. “Implementing the IEA strategy in the Clean Air Scenario can push energy-related pollution levels into a steep decline in all countries. It can also deliver universal access to modern energy, a rapid peak and decline in global greenhouse-gas emissions and lower fossil-fuel import bills in many countries.”

The Clean Air Scenario includes calls to deliver access to clean cooking facilities to an additional 1.8 billion people by 2040; implement emission controls and fuel switching in the power sector; increase energy efficiency in industry; and set emission standards that are strictly enforce for road transport. 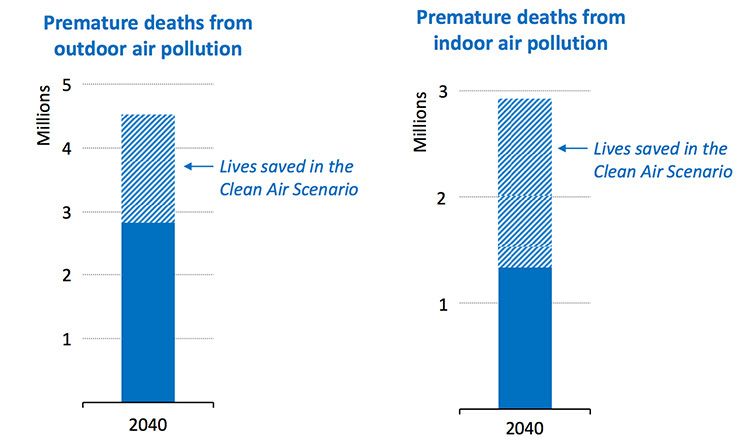 Following these strategies, the energy demand would be 13 percent lower in 2040. In India, the portion of population exposed to a high concentration of fine particles, the Times reported, would fall below 20 percent in 2040 from 60 percent today.