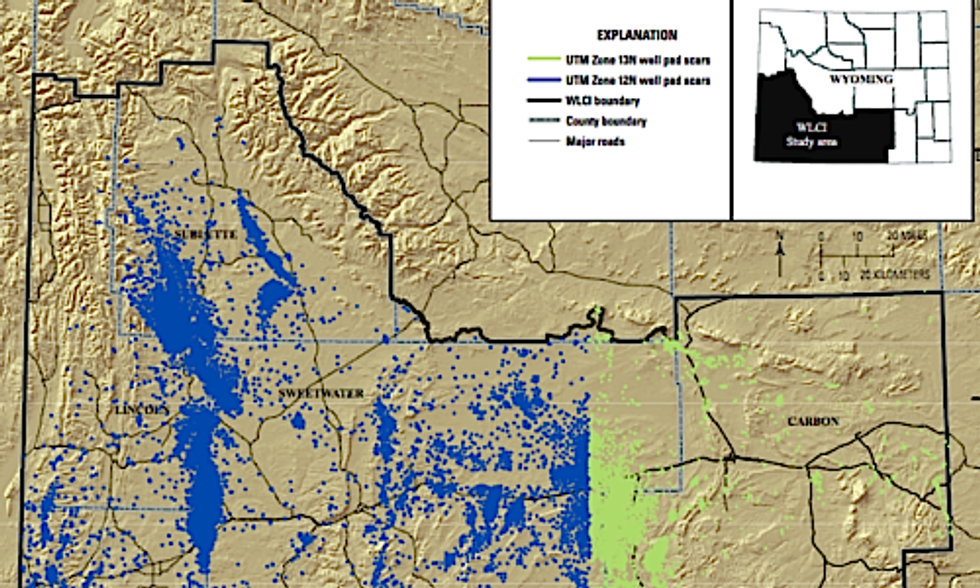 Oil and gas wells, including those involved in hydraulic fracturing—fracking—operations, scar a major portion of southwest Wyoming, according to a recent analysis by the U.S. Geological Survey.

The Wyoming Landscape Conservation Initiative identified nearly 17,000 oil and gas well pad scars, shown in blue and green, in southwest Wyoming. The scars date from around 1900 to 2009. Map credit: USGS

Nearly 17,000 well pads and former drilling areas associated with oil and natural gas production were identified in satellite images across a 30,000-square-mile region. The maps include well scars dating from around 1900, when oil drilling started in the region, up to 2009, at which point natural gas extraction far outweighed oil production.

Since then, production has only intensified in Wyoming, a leading state in the U.S.'s unconventional oil and gas boom. The mapping effort, a first step in determining how oil and gas drilling operations impact wildlife and ecosystems, focused on southwestern Wyoming because it not only has some of the nation's largest natural gas reserves, but also because the region has high-quality wildlife habitat and encompasses a major portion of the country's remaining intact sagebrush steppe.