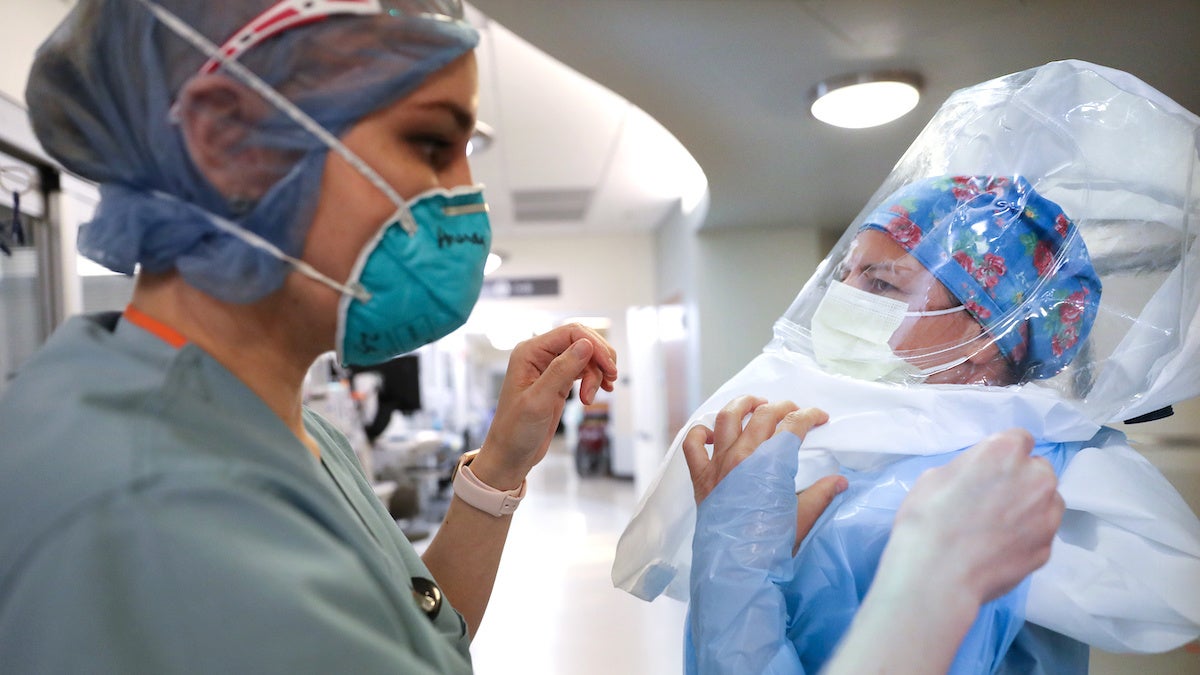 Nurses wear PPE prior to caring for a COVID-19 patient in the ICU at Sharp Grossmont Hospital on May 5, 2020 in La Mesa, California. Mario Tama / Getty Images

One of the initial reasons social distancing guidelines were put in place was to allow the healthcare system to adapt to a surge in patients since there was a critical shortage of beds, ventilators and personal protective equipment. In fact, masks that were designed for single-use were reused for an entire week in some hospitals.

Now, five months into the pandemic, health care workers are raising the same concern. They are facing a shortage of masks, gowns, face shields and gloves, as The Washington Post reported.

“We’re five months into this and there are still shortages of gowns, hair covers, shoe covers, masks, N95 masks,” said Deborah Burger, president of National Nurses United, who cited results from a survey of the union’s members, as The Associated Press reported. “They’re being doled out, and we’re still being told to reuse them.”

In a survey of 23,000 registered nurses, National Nurses United found 85 percent were asked to reuse masks designed for single use, according to The Washington Post.

The new shortage is not just affecting urban hospitals like it did in March. The rising demand for protective gear is now plaguing a broad range of health care facilities across the country, from urgent cares to doctors’ offices to nursing homes. Several major medical associations said this was a preventable problem that would have required swift and aggressive action from the federal government in the early days of the pandemic, according to The New York Times. If the government had aggressively procured and distributed critical supplies, this shortage could have been avoided.

“A lot people thought once the alarm was sounded back in March surely the federal government would fix this, but that hasn’t happened,” said Burger to The Washington Post

She, like many health-care workers, blamed the Trump administration for the lack of equipment. She pointed out that the administration has insisted the responsibility falls to state and local officials, with the federal government playing only a supporting role.

In a letter to Congress last week, the health department in DuPage County, Illinois, near Chicago, said all its hospitals are reusing protective gear “in ways that were not originally intended and are probably less safe than the optimal use of PPE,” as The Associated Press reported.

Neurologists, cardiologists and cancer specialists around the country have been unable to reopen their offices in recent weeks, leaving many patients without care, according to a letter from American Medical Association to the the Federal Emergency Management Agency, Vice President Mike Pence and members of Congress.

“We have kids living with grapefruit-sized abscesses for over three months who can’t eat or drink and there’s nothing we can do for them because we can’t get P.P.E.,” said Kay Kennel, the chief officer of Lubbock Kids Dental, to The New York Times. Her clinic serves low-income families in Texas and has a list of 50 children awaiting emergency surgery. “It’s been just horrible, and given the growing number of infections here, I’m afraid things are going to get worse.”

Rear Adm. John Polowczyk, who is in charge of coronavirus-related supplies for the White House, told Congress last week that more than one-fourth of the states have less than a 30-day supply.

“It would seem like in less than 30 days, we’re going to have a real crisis,” said Rep. Bill Foster, an Illinois Democrat, as The Associated Press reported.

That prompted the American Medical Association to write a letter to the White House, asking it to invoke the Defense Protection Act to require American manufacturers to increase supplies of N95 masks and gowns, as The Washington Post reported.

Former Vice President Joe Biden said yesterday that he would use that law to boost domestic protection of medical gear if elected.

As the New York Times noted, the nation’s supply of PPE is trapped in an unsustainable supply chain model. The U.S. remains dependent on overseas manufacturers and various middlemen who raised prices sevenfold amid soaring global demand. There are only a handful of U.S.-based companies still making PPEs and they say they are already at maximum capacity.

So far, more than 900 health care workers have died of COVID-19, according to a tally by National Nurses United. Burger said many of the deaths have been linked to inadequate protective gear.

“There are tools at President Trump’s disposal and he has failed us,” she said to The New York Times. “These deaths are entirely preventable.”