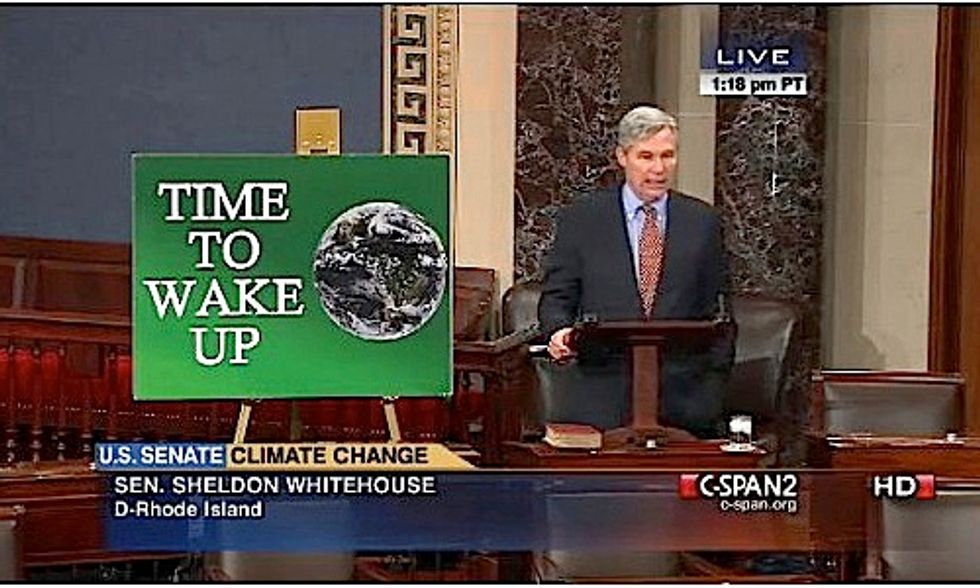 Nearly every week, Sen. Whitehouse (D-RI) rises on the Senate floor and delivers an impassioned speech about the need to confront climate change. Wednesday marked his fiftieth climate address, but he is not stopping there. He will continue beating the drum for climate action, because he knows this crisis cannot be ignored.

Sen. Whitehouse delivered his 50th weekly speech on global warming yesterday, calling on the U.S. government to "wake up."

There are times in history when people must stand for what is right. This is one of those times, and Sen. Sheldon Whitehouse is one of the leaders calling for change.

He gives voice to the countless Americans living on the frontlines of global warming—from the Texans dealing with years of drought to the New Yorkers rebuilding after Superstorm Sandy to the Rhode Islanders coping with sea level rise. And he reminds Congress we have a moral obligation to protect our children from more devastating climate impacts.

I just returned from Hong Kong, about 900 miles from the destruction caused by Typhoon Haiyan. More than 9.5 million people have been affected by the storm and many have lost their homes and loved ones. Families have been torn apart and entire towns flattened, and now survivors are struggling to find food to eat and water safe enough to drink. It will take years to recover from the damage.

The storm packed unprecedented strength, and it offers a sign of things to come if we fail to curb global warming pollution. Climate change is making our oceans warmer and warmer seas mean more violent storms. MIT scientist Kerry Emanuel explains, “As you warm the climate, you basically raise the speed limit on hurricanes.”

President Obama has directed the EPA to reduce carbon pollution from power plants, and the agency is moving forward. But it will take a lot of work to finalize these standards, and leaders like Sen. Whitehouse are great allies in the effort. Week in and week out, he calls for action—even when Congress is caught in gridlock and even when the political focus has fallen elsewhere—because the climate threat cannot be denied.

In his speech on Wednesday, Senator Whitehouse said:

I give these speeches because climate change is real, because the campaign of denial is as poisonous to our democracy as carbon pollution is to our atmosphere and oceans, and because I am confident. I am confident that we can do this. We can strengthen our economy, we can redirect our future, we can protect our democracy and we can do our duty to the generations that will follow us. But we have to pay attention. We have to wake up.

This was originally posted on NRDC's Switchboard.