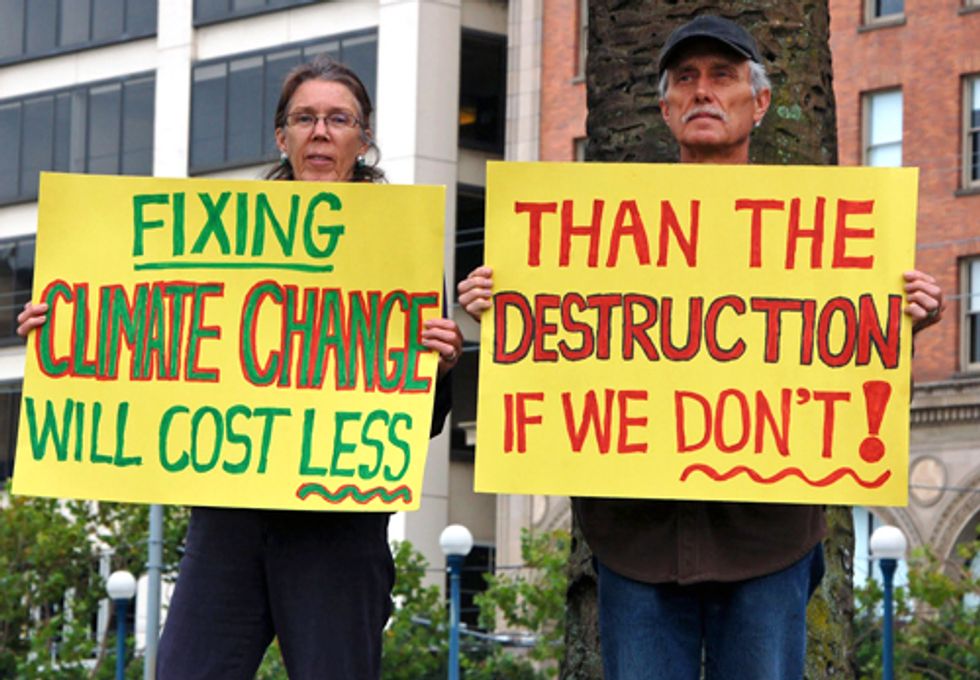 A new study released today shows that the U.S. government is using faulty calculations and outdated information to determine the costs of energy and climate change in America. The study was written by Chris Hope from the University of Cambridge and Laurie Johnson of the Natural Resources Defense Council, and published in the Journal of Environmental Studies and Sciences.

Current government models would have us believe that fossil fuels provide the cheapest sources of electricity for the United States, but the new study says that the numbers being used are misleading, as they do not take into account all of the costs, specifically those related to climate change, that these sources of energy carry.

… Regulatory agencies are using a faulty model to estimate carbon pollution damages that all but ignores the economic damages climate change will inflict on future generations.

After valuing these costs more completely, our study finds that carbon pollution will impose damages between 2.6 to more than 12 times higher than the government’s main estimate. The government put the value of the damage caused by carbon pollution at $21 per ton of CO2, whereas our revised estimates place the cost at between $55 and $266 per ton. Importantly, even these revised estimates may be too low: they correspond to what might happen if future temperature increases are in the middle of scientists’ projections—not any of the worse-case scenarios they warn us about. Additionally, the model left out many damages that couldn't be quantified.

As Laurie Johnson points out, the estimates from the government are hugely significant, as they are the primary drivers behind the government’s climate change and emissions policies. Setting the costs too low will cause fewer actions and regulatory controls to be put in place, thereby exacerbating the problem.

The charts below show the discrepancies between the government’s models and the revised models from the report:

As the charts clearly show, ignoring the cost of emission damages benefits the coal and natural gas industries tremendously. But when you factor in the costs that the emissions impose on our health and our environment, the clean energy technologies are clearly the best way to go.

The NRDC says the following about the cost analysis:

At our two lowest discount rates (1 and 1.5 percent), we find that the real cost (i.e. generation costs inclusive of pollution damages) of building new electricity generation from natural gas (what the market currently favors) is higher than for wind or natural gas with carbon capture and storage technology (CCS.) At 1 percent, solar photovoltaic and coal with CCS would also be cheaper. These findings are driven by differences in climate change costs only, as SO2 pollution from coal with capture is small, and negligible for natural gas. When the government’s (higher) discount rates are used, conventional natural gas appears to be cheaper than these cleaner technologies.

I was surprised with my results for replacing existing generation: at all of our discount rates, it would be cheaper on average to replace the coal fleet with cleaner sources than to continue operating it. The fleet emits so much CO2 (coal accounts for over one third of all U.S. emissions) that the avoided climate damages alone outweigh the apparent cost advantage of maintaining existing infrastructure.

Interestingly, at the two lowest discount rates (2.5 and 3 percent) used in the government’s analysis, the real cost of maintaining the coal fleet is higher than replacing it with conventional natural gas plants. At its lowest rate (2.5 percent), wind and natural gas using CCS would also be economically efficient.

The numbers and calculations included in the study show us that long-term investment in renewable energy will pay off significantly for individuals, the government, and the economy. But those are long term benefits, not short term, which is always a tough sell for investors (the investors in this case being citizens, government entities, and energy companies).

As long as corporations are able to make higher profits using fossil fuels, they will continue to do so. The cost burden is shifted from the corporations to the federal government and taxpayers. The only exception is when corporations are either fined or sued for damages related to pollution, which is not common or costly enough for them to make a change.