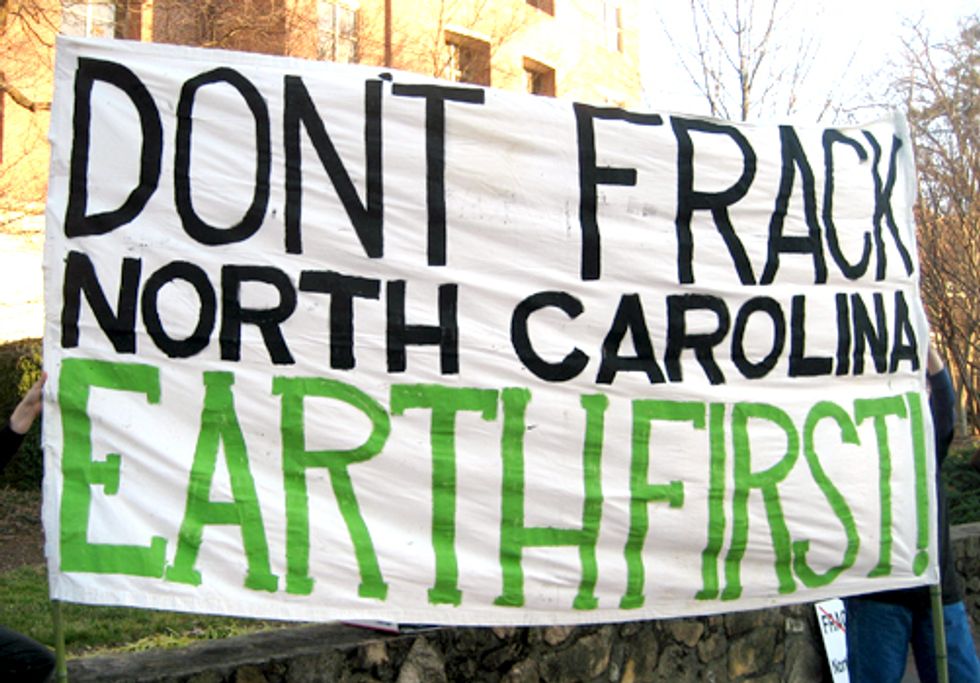 North Carolinians, with the grassroots group Croatan Earth First!, organized a mobile protest this morning at the Department of Environment and Natural Resources (DENR) Headquarters—217 W. Jones St. in Raleigh, NC—and marched to the Archdale building—512 N. Salisbury St.—where the NC Mining and Energy Commission is holding a meeting. Protestors carrying banners, signs and drums led chants to vocalize their opposition to the dangerous energy extraction process known as fracking. Two local North Carolinians have locked themselves to the front of the Archdale building’s front doors in protest of the state’s continued movement towards legalizing hydraulic fracturing. There have been two arrests so far this morning, neither in connection with the lockdown.

“Fracking has been devastating communities and land across the country,” says Earth First!er Lydia Nickles. "It will destroy North Carolina’s clean air, water and biodiversity.”

Croatan Earth First! seeks to highlight the involvement of both the NC DENR and the NC Mining and Energy Commission, which are working closely on developing policies to initiate hydrofracking in North Carolina, despite numerous and glaring conflicts of interests.

A large number of Mining and Energy Commission members have close ties to the oil and gas industry, including Ray Covington, a partner at NC Oil & Gas, who profits financially from an increase in leased lands for fracking; Chairman Jim Womack, a Lee County Commissioner and an oil industry supporter who claimed, at a DENR public meeting, that North Carolinians are more likely to be hit by a meteor than have water contaminated by fracking; and Charles Holbrook, a former employee of Chevron Oil.

“We consider this commission illegitimate, and it should in no way be making the decision as to whether our water could be poisoned in five to ten years,” said Nickles.

Despite evidence that North Carolina’s geological formations make it particularly vulnerable to aquifer contamination by fracking fluids, DENR has done nothing to modify their spring 2011 report, which grossly underestimated the environmental risks of hydrofracking in NC. The U.S. Environmental Protection Agency recently released a study that confirmed contamination of the water aquifer in Pavillion, Wyoming by fracking fluids.

Croatan Earth First! also cites numerous spills that have occurred in the highly fracked Marcellus Shale—including 4,700 gallons of hydrochloric acid spilled this year in Bradford County, and a 30-foot methane geyser which erupted in Tioga county, PA, as evidence of the numerous threats hydrofacking poses to environmental and public health. Furthermore, a blowout at one of Chesapeake Energy’s rigs in Oklahoma this year burned escaping methane for several days and more than 70 residents had to be evacuated to escape the acute effects of the strong greenhouse gas.

Last week, a natural gas pipeline exploded along I-77 in West Virginia, injuring people and catching nearby buildings on fire. “The explosion of the pipeline in nearby West Virginia is only one of many frequent industry accidents nationwide. If fracking comes to North Carolina, we can expect more pipelines here and more accidents closer to home.” Piedmont Natural Gas is currently building a number of pipelines throughout the state as many coal plants are being converted to natural gas.

Croatan Earth First! intends for this mobile demonstration to illustrate the direct and active ways that hydrofracking can be fought by the majority of North Carolina citizens who oppose the practice, as legal attempts to block hydrofracking have been exhausted.

“Our only recourse, after so many attempts to block the legalization process, is to oppose hydrofracking with our presence,” continued Nickles. “We are willing to put our bodies between the land we love and those who want to destroy it. Join us.”

Watch the live feed of this action at http://livestream.4ktech.net/channel/elektrosoundwave.