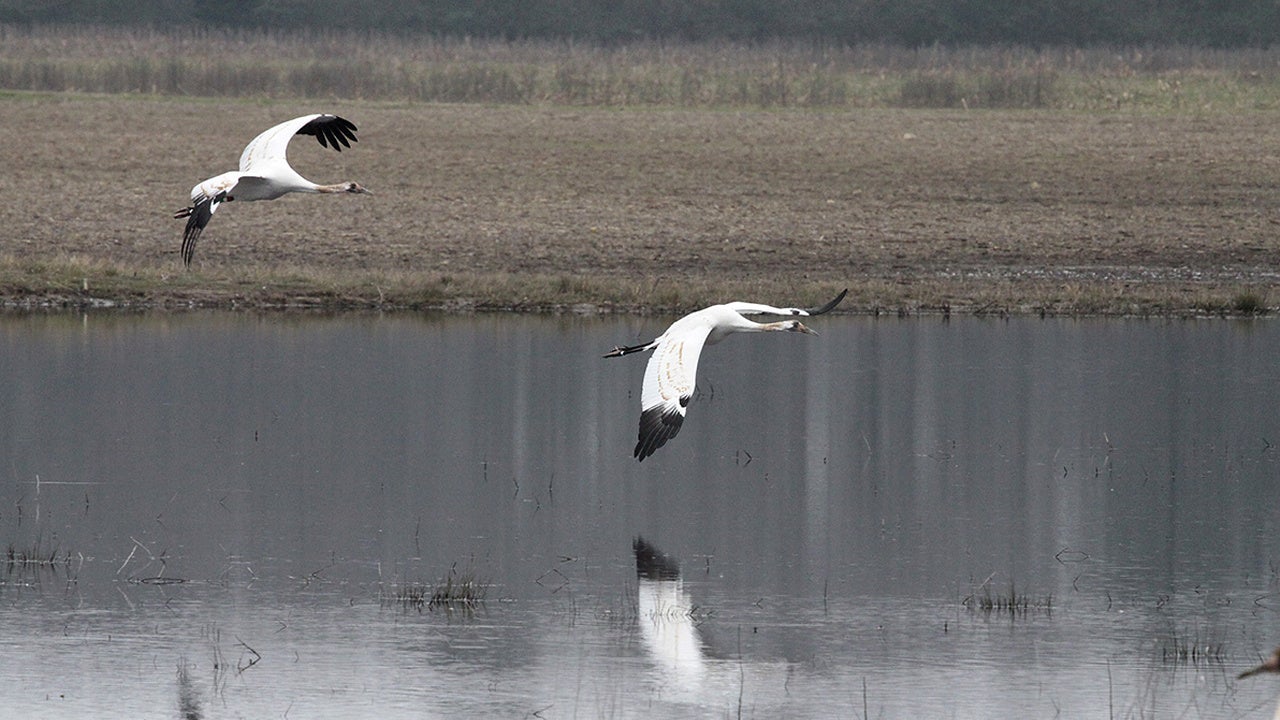 Whooping cranes fly in Wheeler National Wildlife Refuge in Decatur, Alabama. There were only 48 whooping cranes in the country when the Endangered Species Act was passed in 1973, and thanks to the law's protections there are now over 600. U.S. Fish and Wildlife Service / Flickr / CC BY 2.0

Environmental groups on Friday condemned the announcement of a new rule proposed by President Donald Trump that would further weaken the Endangered Species Act by making it easier to destroy habitats vulnerable species rely on for survival.

“President Trump is back for another whack at another key environmental law,” said Oceana senior federal policy director Lara Levison.

At issue is a planned rule change to the Endangered Species Act, or ESA, from the Department of Fish and Wildlife that would redefine “habitat” as “areas with existing attributes that have the capacity to support individuals of the species,” precluding the restoration and repair of historical habitats that could, with time, support endangered species.

“The Trump administration won’t be satisfied until it removes all protections for the natural world, including clean air and water, land, and now even habitat for our most vulnerable wildlife,” Noah Greenwald, the endangered species director at the Center for Biological Diversity, said in a statement.

As the Center for Biological Diversity explained:

The definition stems from a 2018 decision by the U.S. Supreme Court that said the Service needed to define the term habitat in relation to the highly endangered dusky gopher frog. The frog survives in one ephemeral pond in Mississippi. Recognizing that to secure the frog would require recovering it in additional areas, the Service designated an area in Louisiana that had the ephemeral ponds the frog requires. However, this area would need forest restoration to provide high-quality habitat.

“This will have real life-and-death consequences for some of our nation’s most vulnerable species,” said Greenwald.

“The president’s newly proposed rules will make it even harder to save species from extinction,” she said. “The ESA protects threatened and endangered species like sea turtles and the North Atlantic right whale, as well as the habitats they depend on, but the draft rule released today reduces these protections.”

Cathy Liss, president of the Animal Welfare Institute, called on the president and the administration to do the right thing for the planet by saving “an effective and popular law that serves as the last line of defense for rare species facing extinction.”

“At a time of unprecedented wildlife extinction and habitat destruction, we should be working to strengthen — not weaken — the Endangered Species Act,” said Liss.