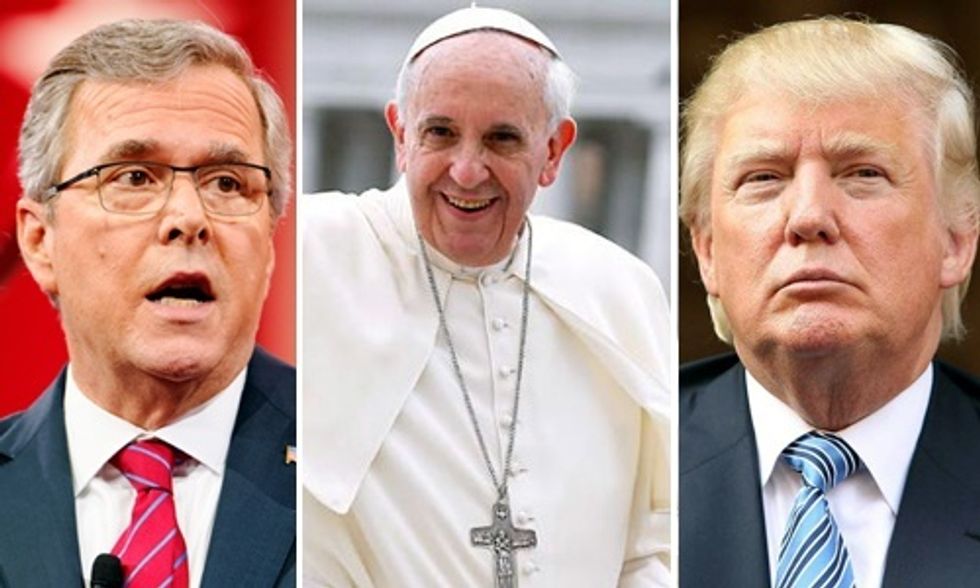 Several conservative politicians, including two presidential candidates, criticized the Pope for calling for climate action in his first-ever visit to the U.S. Donald Trump, who has criticized the Pope repeatedly, does not agree with Francis' latest remarks, in which he called climate change "a problem which can no longer be left to a future generation."

However, Trump feels, "I think that clean air is a pressing problem. You want to have clean air, clean water. That's very important to me, and I've won many environmental awards. I am not a believer in climate change."

But clearly not everyone agrees with the Donald. When the presidential candidate stepped out onto Fifth Ave. in New York City yesterday to wave to a crowd waiting to see Pope Francis, the crowd booed and several yelled "feo," Spanish for ugly.

Jeb Bush also took issue with the Pope's words. Bush was asked by a reporter yesterday his thoughts after Pope Francis endorsed the Obama administration's environmental policy by praising the President for what he's been doing. The reporter wanted to know: Is the Pope wrong? Bush, a Catholic, was quick to say, "The Pope is not wrong."

But then he reverted back to that tired Republican trope—"he's not a scientist"—which Hillary Clinton so hilariously mocked.

Other conservative politicians weighed in after Pope Francis gave the first-ever papal address to Congress. Rep. Tim Huelskamp (R-KS), who is also a Catholic, told The Huffington Post that climate change is not "settled science," so he doesn't feel the same sense of urgency as his holy leader feels. "I don't think there's a scientific consensus on that," Huelskamp said.