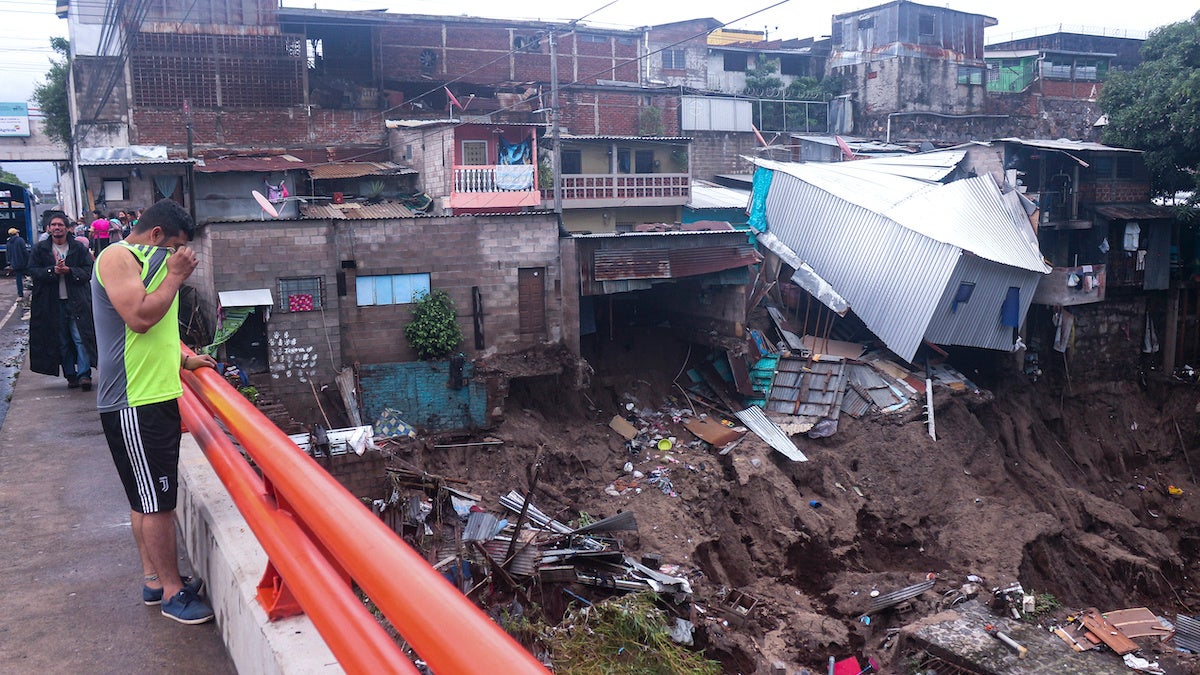 A man observes the damages caused to his neighborhood from Tropical Storm Amanda on May 31, 2020 in San Salvador, El Salvador. Guillermo Martínez / APHOTOGRAFIA / Getty Images

Four people are missing, according to Noticias El Salvador, and around 200 homes were damaged by falling trees, flooding and mudslides, AFP reported.

“We lost everything, we’ve been left with nowhere to live,” San Salvador resident Isidro Gomez, whose home was destroyed when a river overflowed its banks, told AFP.

San Salvador, the nation’s capital, saw half of the nation’s total fatalities, its Mayor Ernesto Muyshondt said. He said the storm had forced 4,200 people into government shelters in the midst of the coronavirus pandemic.

“We are experiencing an unprecedented situation: one top-level emergency on top of another serious one,” he told AFP, referring to the pandemic.

The government of El Salvador has reported a total of 2,582 coronavirus cases. Forty-six people have died, and 1,063 have recovered.

Amanda strengthened into a tropical storm before making landfall Sunday, making it the first named storm of the East Pacific 2020 hurricane season, AccuWeather reported. It later weakened into a tropical depression and then a tropical rainstorm, but forecasters say its heavy rainfall still poses a major risk to Central America early this week.

Because of its heavy rainfall, it was forecast to be a 1 on the AccuWeather RealImpact™ Scale for Hurricanes.

“Heavy rainfall will be the greatest threat over Central America, particularly in the higher terrain or Guatemala and El Salvador where rainfall totals of 18-24 inches are possible,” AccuWeather senior meteorologist Randy Adkins said.

WATCH: Tropical Storm Amanda inundated parts of El Salvador with water, leading to the deaths of at least seven people. Up to 15 inches of rain is expected in El Salvador, southern Guatemala, western Honduras, and the Mexican states of Tabasco and Veracruz. pic.twitter.com/gJ0tIzSakG

In El Salvador, that rainfall has already turned deadly in the form of floods and landslides. One person drowned in a flooding river, while another was crushed by a collapsing wall, Reuters reported. An eight-year-old boy was killed when his house collapsed.

The storm is estimated to have caused 0 million in damage to El Salvador, President Nayib Bukele said, according to AFP. He declared a 15-day state of emergency to recover from the storm.

Amanda weakened as it passed on to Guatemala, where it caused flooding and at least five landslides that blocked roads. However, no one had to be evacuated.

This GOES-16 clean IR loop shows the remnants of eastern Pacific Tropical Storm Amanda, located over northern Guatemala this evening. While the storm has weakened, cold cloud tops associated with the system show that heavy rainfall is likely over the region for the next few days. pic.twitter.com/doPIcemy56

The climate crisis is making hurricanes wetter and extreme precipitation events more likely. A storm does not have to be a hurricane to cause damage. In 2019, Tropical Storm Imelda swamped Houston with a 1-in-1,000-year flood event just two years after Hurricane Harvey did the same.

Correction: This piece has been updated to clarify that all the deaths reported by Reuters took place in El Salvador.