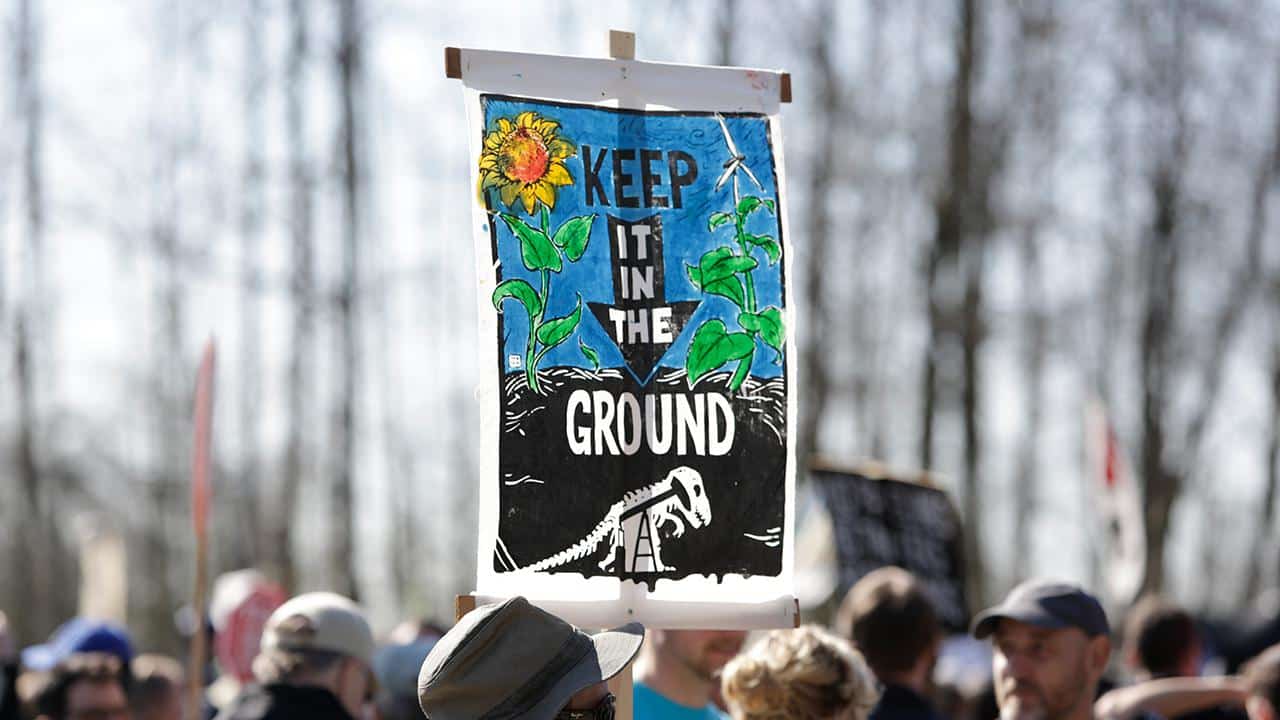 A pair of Indigenous land defenders locked themselves to equipment at a fossil fuel pumping station in British Columbia on Saturday, vowing to continue resisting a government-owned oil pipeline that is harming the climate, the environment, and First Nations peoples whose unceded lands it traverses.

The pipeline protesters — self-described on social media as “accomplices” of the Braided Warriors and Tiny House Warriors — locked themselves to a crane at Trans Mountain Corporation’s Blue River pumping station.

The Trans Mountain Pipeline — which is owned by the Canadian government through subsidiary Trans Mountain Corporation—carries crude oil from the tar sands of Alberta to the British Columbian coast. It is widely considered the world’s dirtiest oil.

In addition to the harm done to the climate and environment, the pipeline has grave social costs. According to First Nations advocates, it desecrates sacred Indigenous land, and transient workers housed in man camps are often perpetrators of crimes against Indigenous women, girls, and two-spirit people. Murder, rape, human trafficking, and other crimes abound, contributing to the epidemic of missing and murdered Indigenous women, girls, and two-spirit people (MMIWG2S).

Two accomplices of Tiny House Warriors and Braided Warriors are locked down to equipment at TMX pumping station in unceded Secwepemc territory. pic.twitter.com/n41nkjVmHr

Secwepemc land defenders have strategically built tiny houses along the route of the 518 km (321 mile) pipeline “to assert Secwepemc law and jurisdiction and block access to this pipeline.”

“We have never provided and will never provide our collective free, prior, and informed consent—the minimal international standard—to the Trans Mountain Pipeline Project,” the Tiny House Warriors website declares. “The Tiny House Warrior movement is the start of re-establishing village sites and asserting our authority over our unceded territories.”

Kanahus Manuel, a Secwepemc land defender and Tiny House Warrior, told The Sparrow Project — a nonprofit grassroots public interest newswire focused on amplifying stories from struggles for social, economic, racial, and environmental justice — that Trans Mountain does “not have consent from the Secwepemc and failure to recognize Secwepemc title, land rights, and Indigenous jurisdiction will only result in more conflict, direct actions, blockades, and Indigenous land occupations, which will increase the risks and economic uncertainty for Trans Mountain and its construction deadlines.”

The Braided Warriors, an Indigenous organization that promotes First Nations rights and sovereignty in the Tsleil-Waututh, Squamish, and Musqueam territories, said on its Instagram page that “we are in solidarity with the Secwepemc people in their fight to stop foreign invasion of their lands and protect their lands, waters, animals, and peoples.”

“It is our role to be accomplices to Indigenous land defenders and put ourselves on the line to stop the ongoing colonization of Indigenous territories and peoples,” said Braided Warriors. “This pipeline will affect all of us and all future generations, but first and foremost will impact the nations and peoples along this route, including Secwepemc people.”

“Today we stand on unceded, unsurrendered, illegally occupied Secwepemc land to show that we will not stop until the pipeline is terminated and the land is returned to the rightful title holders,” they added.