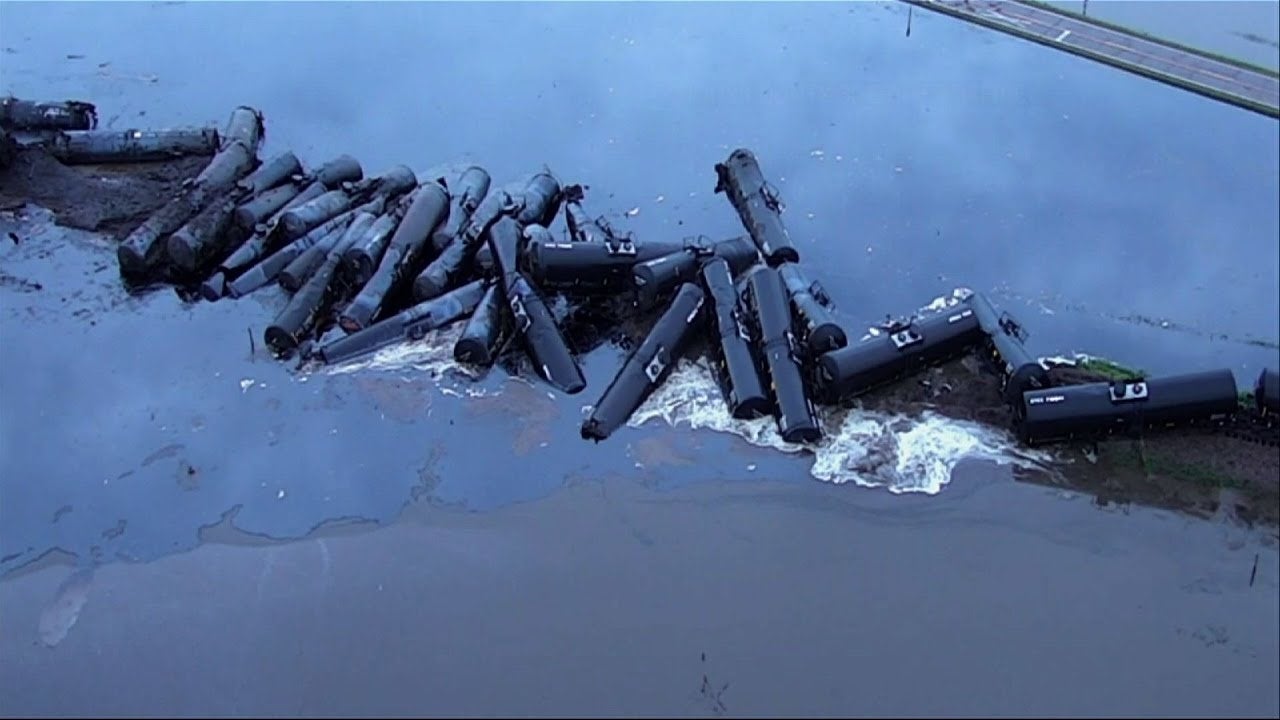 Thirty-two cars of a Burlington Northern Santa Fe (BNSF) train derailed, 14 of which leaked crude oil into the Rock River in Doon, Iowa. The cause of the derailment is unknown, but officials including Iowa Governor Kim Reynolds attributed it to heavy rain Wednesday and Thursday which led to flooding.

To aid recovery from extreme weather and its consequences, including the derailment, Reynolds issued a proclamation of disaster emergency Saturday for Lyon County, where the train derailed, as well as Plymouth, Sioux and Woodbury counties.

The oil spill hit the town of Rock Valley, Iowa, which was coping with its second flood in four years, especially hard.

“Our city administrator said to me, ‘The only thing we need now is a plane crash,'” Rock Valley mayor Van Otterloo told the Des Moines Register. “Everything came at once.”

Rock Valley acted quickly to shut off water wells following the spill and plans to drain the wells and use rural water until the well water tests safe.

There are also concerns that oil could contaminate drinking water in Omaha, Nebraska, 150 miles downstream, since the Rock River merges with the Big Sioux River, which then feeds into the Missouri. Omaha’s Metropolitan Utilities District said they were monitoring water pulled from the Missouri, the Des Moines Register reported. The Metropolitan Utilities District said they could source water from unconnected rivers if needed, according to Reuters.

Reynolds told the Des Moines Register it was still unknown how many communities were affected by the oil spill and how it would impact the surrounding environment.

While none of the initial responses mentioned it, last week’s flooding and the resulting derailment could be related to climate change. A pre-Trump Environmental Protection Agency (EPA) assessment of climate change impacts in the Midwest found that precipitation and storms were projected to increase this century, and precipitation in some areas had already increased by 20 percent.

Cristi Moore, who lives in a trailer park near Rock Valley on land that was flooded both in 2014 and 2018, didn’t mention climate change but had noticed a difference in the severity of recent floods. She told the Des Moines Register that before 2014, her levees would have been high enough to combat the highest flood levels.

“This is really weird. That’s why I’m saying, ‘I’m not smart. I don’t know. This is an engineer thing,'” Moore told the Des Moines Register. “What’s going on that now we’re getting flooded again?”