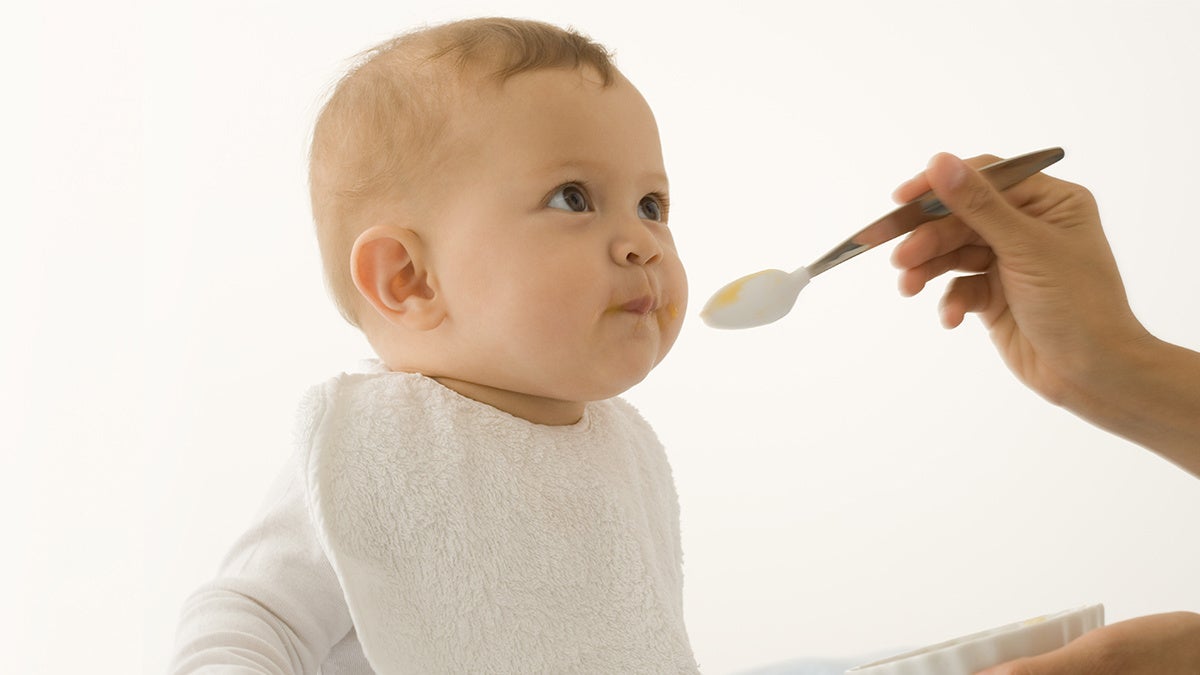 Heavy metals that may damage a developing brain are present in 95 percent of baby foods on the market. Cirou Frederic / PhotoAlto Agency RF Collections / Getty Images

Heavy metals that may damage a developing brain are present in 95 percent of baby foods on the market, according to new research from the advocacy organization Healthy Babies Bright Futures (HBBF), which bills itself as an alliance of scientists, nonprofit organizations and donors trying to reduce exposures to neurotoxic chemicals during the first three years of development.

Researchers commissioned by HBBF looked at 168 different baby foods that spanned 61 brands commonly found on grocery store shelves. From that large sample, 95 percent were contaminated with one or more of four toxic heavy metals — arsenic, lead, cadmium and mercury.

The high prevalence of the toxic metals meant that 26 percent of the foods tested had all four of the heavy metals.

“Arsenic, lead and other heavy metals are known causes of neurodevelopmental harm,” said Dr. Philip Landrigan, a pediatrician and director of the Program in Global Public Health and the Common Good in the Schiller Institute for Integrated Science and Society at Boston College, in an HBBF issued statement. “Low level exposures add up, and exposures in early life are especially dangerous. The cumulative impact of exposures is what makes this a significant concern that demands action.”

Foods with the highest concentration of neurotoxins tended to be rice-based products, sweet potatoes and fruit juices, according to the report.

“Even in the trace amounts found in food, these contaminants can alter the developing brain and erode a child’s IQ. The impacts add up with each meal or snack a baby eats,” said the analysis, as CNN reported.

Four of seven infant rice cereals had a toxic form of arsenic in excess of the FDA’s threshold of 100 parts per billion (ppb).

“These popular baby foods are not only high in inorganic arsenic, the most toxic form of arsenic, but also are nearly always contaminated with all four toxic metals,” the analysis said, as CNN reported.

The report also found that 83 percent of baby foods tested had more lead than the 1-ppb limit endorsed by public health advocates, and one of every five foods tested had over 10 times that amount.

“Even very low exposure levels cause lower academic achievement, attention deficits and behavior problems. No safe level of exposure has been identified,” the report said.

The results are not far off from an FDA study that found one of the four toxic metals present in 33 of 39 baby foods, according to CNN. However, this new report looks at a much broader range of products and brands than previous studies have.

The HBBF has started a petition to ask the FDA to set stricter limits on arsenic levels in baby food to protect a baby’s brain development.

“Current arsenic contamination levels in rice cereal and juice are 36% and 75% less, respectively, than the amounts measured a decade ago,” said HBBF research director and study author Jane Houlihan in a statement. “When FDA acts, companies respond. We need the FDA to use their authority more effectively, and much more quickly, to reduce toxic heavy metals in baby foods.”

In lieu of tighter regulations, the HBBF report recommends parents take steps to protect their babies by offering them rice-free snacks, frozen bananas and chilled cucumbers instead of teething biscuits, oatmeal instead of rice-cereal, and offering a wide-variety of fresh fruits and vegetables.