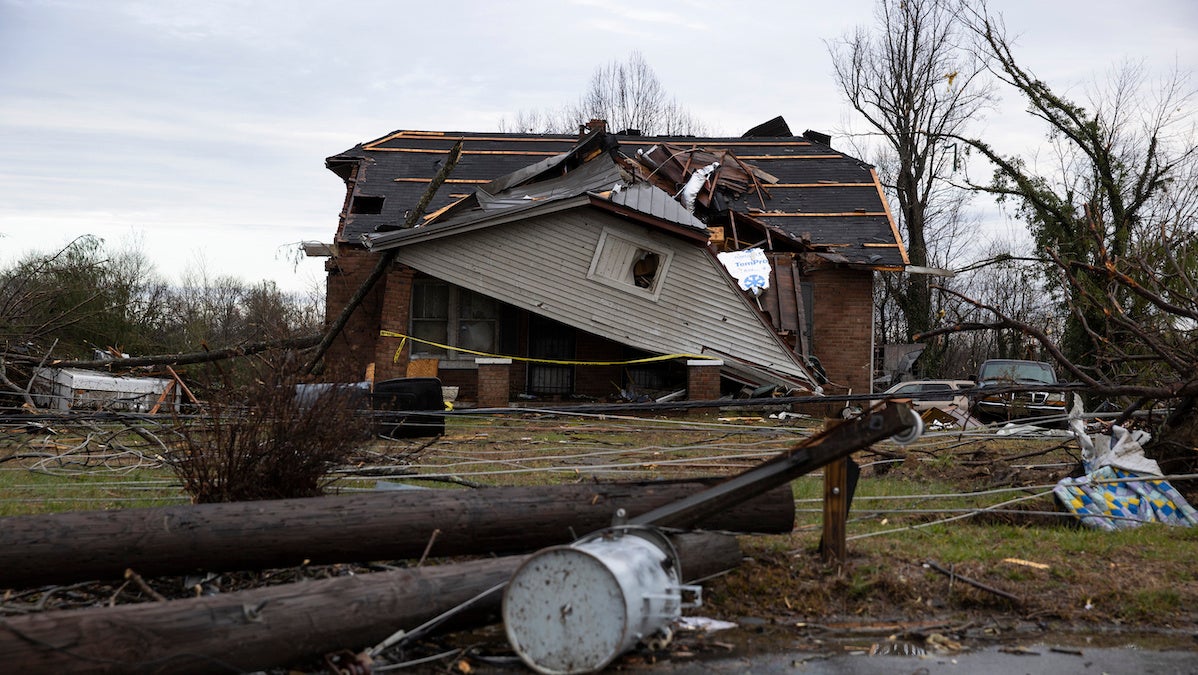 A home is shown destroyed by high winds from one of several tornadoes that tore through the state overnight on March 3, 2020 in Cookeville, Tennessee. Brett Carlsen / Getty Images

At least 25 people have died in Tennessee following the deadliest tornado day in seven years.

A storm system spawned tornadoes that wreaked havoc in west and central Tennessee Tuesday morning, including one that touched down in Nashville and ripped through the city for miles, USA Today reported.

“It is heartbreaking,” Gov. Bill Lee said in a press conference reported by The New York Times. “We have had loss of life all across the state.”

Surreal damage in a Nashville neighborhood.

If your family needs a safe place to go after last night's storms, the @RedCrossTN is on hand to help: https://t.co/4MW2vZnVOx. pic.twitter.com/YzNUTgUW8U

The storm cut a 10 mile path through downtown Nashville, according to The Weather Channel. One-hundred and fifty-six were treated for injuries at the hospital, and almost 50 buildings collapsed, though more were damaged.

The Nashville tornado touched down north of downtown just before 1 a.m. and destroyed buildings in Germantown before moving east to the Five Points part of East Nashville, USA Today reported. Because it moved so quickly and struck so late, many people did not have time to seek shelter. Residents in East Nashville only had a six minute warning, CNN reported.

“I got the warning and in less than ten minutes you could just feel the pressure, my ears were popping we all ran downstairs and just huddled together,” Danielle Theophile told CNN affiliate WSMV. “It went by so fast … it’s gone.”

The storm system also wreaked havoc outside of Nashville. It was the deadliest in Putnam County, 70 miles east of Nashville, where at least 19 people were killed, according to The New York Times. Several of those who died were children, The Nashville Tennessean reported. It was the worst natural disaster in the county’s history. Eighty-eight people were treated at the Cookeville Regional Medical Center and 77 are missing, though authorities think some of them may be unreachable due to power outages.

“This tornado absolutely demolished and devastated everything in its path,” Putnam County Sheriff Eddie Farris told The Nashville Tennessean.

The storm also killed three people in Wilson County and one person in Benton County, according to the Tennessee Emergency Management Agency.

Tennessee has a history of devastating tornadoes, according to The New York Times. It survived deadly storms in 1933, 1998 and 2008. Tuesday’s storm was the deadliest tornado event since a tornado in Moore, Oklahoma killed 24 in 2013, according to CNN.

Evidence suggests that tornado activity is moving eastward from the Great Plains towards the Midwest and Southeast, and the climate crisis could be driving this shift. Tornadoes that touch down in the South tend to be more dangerous because they impact more densely populated areas where there are vulnerable mobile homes, and they are more likely to occur at night, like Tuesday’s storms.