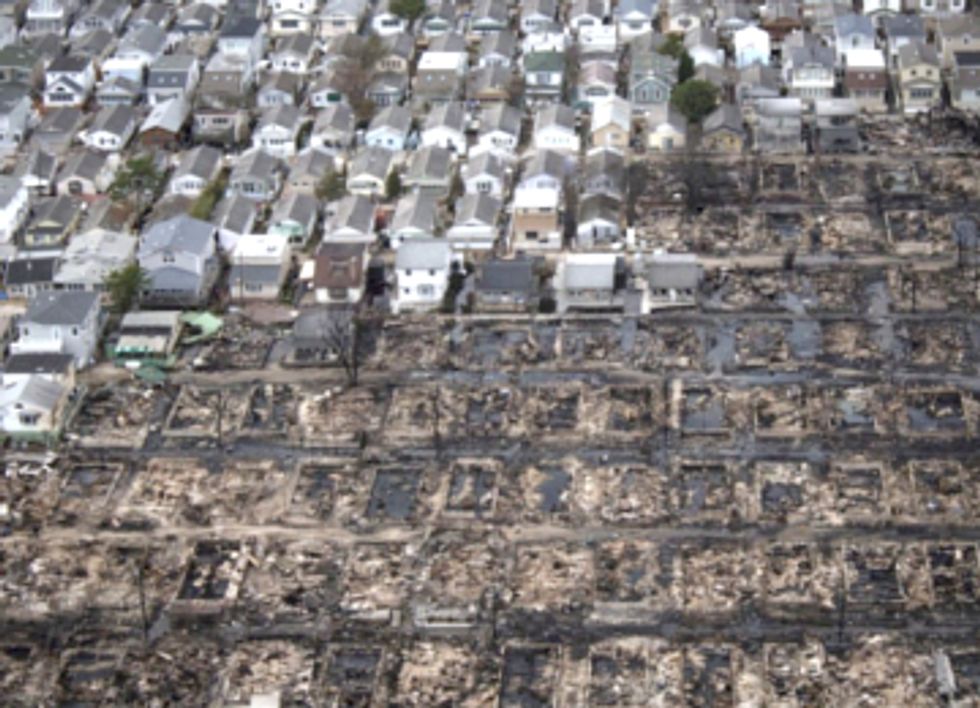 The U.S. suffered from numerous extreme weather events in 2011 and 2012. In fact, there were 25 severe storms, floods, droughts, heat waves and wildfires that each caused more than $1 billion in economic damages, with a total price tag of $188 billion. To help communities recover from these violent weather events, the federal government spent nearly $62 billion for disaster relief in fiscal years 2011 and 2012. These federal funds only cover a portion of recovery costs; private insurance and individuals harmed by the events also spent billions of dollars.

There is recent evidence that climate change played a role in the extreme weather events of 2012. The recently released analysis from the American Meteorological Society determined that:

Approximately half the analyses found some evidence that anthropogenically caused climate change was a contributing factor to the extreme event examined, though the effects of natural fluctuations of weather and climate on the evolution of many of the extreme events played key roles as well.

Information on federal disaster-relief spending is essential to help Congress and the Obama administration budget enough funds to assist communities with damages from future extreme weather events. This issue brief provides the first-known comprehensive estimate of federal disaster-recovery spending on a state-by-state basis. Federal and individual state governments need these data to better budget funds to help communities recover from future storms, floods, droughts, heat waves and wildfires, as scientists warn that climate change will increase the incidences of extreme weather. This information also shows federal taxpayers how money for disaster relief has been spent during the past two years.

The estimates in this issue brief are derived from state-specific federal fiscal outlay data for disaster-recovery programs in FY 2011 and 2012. The brief includes state spending data from six federal departments that provide federal funds for these purposes.

At least one additional program is not included in this analysis because the relevant department was unable or unwilling to provide state-specific outlay data. With the increasing cost and frequency of extreme severe weather events, the federal government must make state-by-state data on disaster-recovery spending publicly and readily available.

As the following map shows, the 10 states that received the most federal disaster relief are primarily farm states in the plains and the Midwest. These states suffered billions of dollars of crop losses due to prolonged drought in 2011 and 2012. This necessitated an estimated $28 billion in crop insurance expenditures in FY 2011 and 2012, which comprised a majority of the spending for disaster programs where we could identify state-by-state expenditures.

Extreme Weather on the Rise

Data from the past 30 years reveal an increase in both presidential disaster declarations and billion-dollar extreme weather events. In the 1980s, there was an annual average of less than two extreme weather events that caused at least $1 billion in damages, and the average annual total damages from these events was $20 billion (in 2012 dollars). From 2010 to 2012, however, there was an annual average of more than nine extreme weather events with at least $1 billion in damages, with average annual total damages of $85 billion (in 2012 dollars).

What’s worse, the draft National Climate Assessment predicts that the number of extreme weather events will continue to grow and that our communities face growing risks because they were not built for an unstable climate:

Human-induced climate change is projected to continue and accelerate significantly if emissions of heat-trapping gases continue to increase. Heat-trapping gases already in the atmosphere have committed us to a hotter future with more climate-related impacts over the next few decades.

Many [climate-related changes] will be disruptive to society because our institutions and infrastructure have been designed for the relatively stable climate of the past, not the changing one of the present and future.

This past June was the fifth-hottest month on record, and the first six months of 2013 were the “seventh warmest such period on record,” according to the National Oceanic and Atmospheric Administration. As of Sept. 4, there were 44 presidential disaster declarations in 2013 due to climate-related extreme weather events. AON Benfield, a reinsurance company, estimates that extreme weather caused at least $32 billion in economic damages in the U.S. during the first half of 2013.

What’s more, one-third of the continental U.S. is suffering from severe, extreme or exceptional drought as of August 27; the drought has shrunk available Colorado River water for cities dependent on it. As The Weather Channel reported:

More than a dozen years of drought have begun to extract a heavy toll from water supplies in the West, where a report released last week forecast dramatic cuts next year in releases between the two main reservoirs on the Colorado River, the primary source of water for tens of millions of people across seven western states.

The U.S. Bureau of Reclamation—the agency charged with managing water in the West—announced Friday [August 16] that it would cut the amount of water released next year by Lake Powell in Arizona by 750,000 acre-feet, enough to supply about 1.5 million homes.

It marks the first reduction in water flows since the mid-1960s.

“This is the worst 14-year drought period in the last hundred years,” said Larry Wolkoviak, director of the bureau’s Upper Colorado Region.

Wildfires are plaguing the West as well. Nationwide, nearly 35,000 wildfires have burned 3.9 million acres of land as of September 4, according to the National Interagency Fire Center. This includes the ongoing Rim fire in California, which has already burned an area the size of Chicago in and around Yosemite National Park. The U.S. Forest Service, which receives 70 percent of federal fire-protection funding, has depleted its budget for wildfire response, forcing the agency to divert hundreds of millions of dollars from other programs to fight ongoing fires. This funding shortage was exacerbated by the automatic across-the-board sequester budget cuts that shrunk firefighting funds by five percent, forcing cuts of 500 firefighters and 50 engines.

Scientists predict that extreme weather will worsen in the coming years even if the U.S. and other nations make significant reductions in carbon and other climate pollution. Despite this, it is still imperative that the U.S. significantly reduce its greenhouse gas pollution—starting with carbon pollution from power plants—and continue to build support for the international phase down of hydrofluorocarbons, or HFCs, and other climate pollutants. President Obama’s recently announced Climate Action Plan includes many essential measures that would launch such pollution-reduction efforts.

In addition to pollution reductions, the U.S. must also plan for the fiscal impact of more frequent or ferocious extreme weather events. The National Academy of Sciences recommended that “a national resource of disaster-related data should be established that documents injuries, loss of life, property loss and impacts on economic activity.” This should include an annual estimate of total federal disaster expenditures nationally and by state. The latter information is essential for budget planning since states will draw on different disaster-relief programs, depending on the climate impacts in each state. States suffering from drought, for instance, will rely on Department of Agriculture programs to help farmers, while those harmed by hurricanes will need Federal Emergency Management Agency (FEMA) disaster relief.

Congress must use this information to include full funding for disaster relief in future budgets and spending bills so that Americans can better understand the cost of extreme weather—and the cost of inaction on climate change. In addition, Congress must end budget sequestration to ensure that funds for disaster-relief and recovery efforts are not reduced further due to across-the-board budget cuts.

The federal government must also invest more funds in communities’ efforts to become more resilient to extreme weather. A recent Center for American Progress analysis estimated that the federal government spends $6 on disaster recovery for every $1 invested in reducing disaster damages, even though resilience investments reduce economic damages four to one. Fortunately, President Obama’s Climate Action Plan includes many valuable proposals to help “prepare for the impacts of a changing climate that are already being felt across the country … by building stronger and safer communities and infrastructure.” The plan will marshal existing federal resources to help communities build stronger disaster resilience.

In addition, the government should gather and publish data on current federal community resilience investments and future needs, and also identify a dedicated source of revenue to provide federal investments in state and local extreme weather resilience efforts. This will not only help Americans protect their lives, homes, farms and businesses, but it should also reduce total federal disaster-relief spending, as resilience investments reduce future damages and disaster-recovery costs.

In 2011 and 2012, Americans suffered from severe droughts, heat waves, wildfires, storms and floods, which some described as the “new normal” after decades of a relatively stable climate. This climate instability is exacerbated by climate change, as noted by Dr. Kenneth Trenberth of the National Center for Atmospheric Research. He warned that “all weather events are affected by climate change because the environment in which they occur is warmer and moister than it used to be.” In addition to steep climate pollution reductions, we must increase our knowledge about where and how much we are spending on disaster relief to help the U.S. recover from climate-driven wind, rain, heat and fire.

To compile state-level outlays from agency budgets for disaster-relief and resilience programs, we found publicly available budget information from annual budget summaries and reports published on agency websites for FY 2011 and 2012. For the departments and agencies that did not publish this information, we contacted staff from each department and agency with our request and submitted Freedom of Information Act solicitations. Unfortunately, not all of our requests have received replies at this time.

This compilation of federal disaster spending by state comes from multiple agencies. Although we believe that it includes all the major programs that fund disaster relief and recovery annually, it may have some gaps. We welcome any state-by-state spending data for additional federal disaster-recovery programs.

Thanks to Matt Kasper, Special Assistant for the Energy program.