The Truth About Artificial Sweeteners 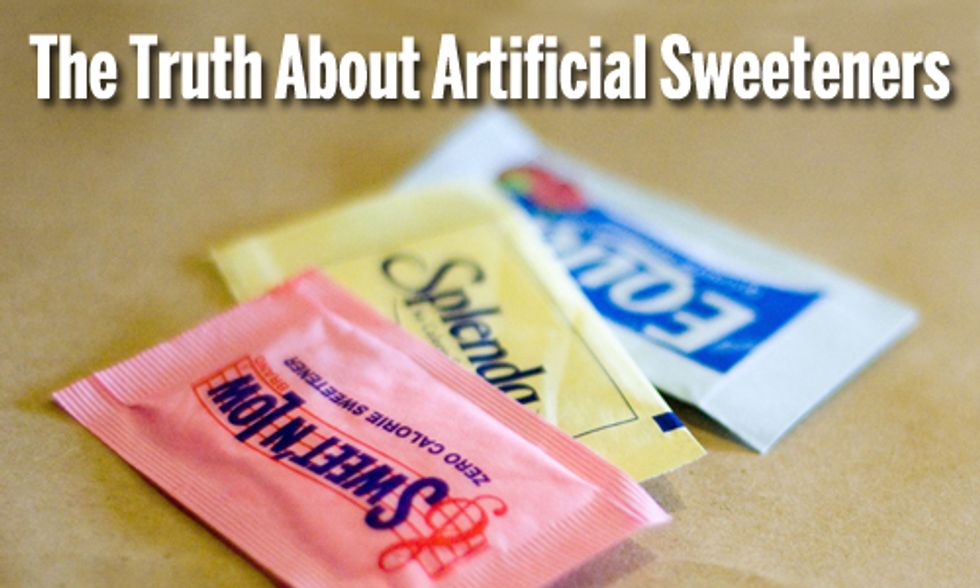 Added sugar is a disaster and many people are trying to avoid it.

But most of us are accustomed to sweet foods, and don’t want to live our lives without them.

For this reason, various artificial chemicals have been invented to replicate the effects of sugar.

These are substances that can stimulate the sweet taste receptors on the tongue.

They usually have no calories and don’t have the harmful metabolic effects of added sugar.

These chemicals are very sweet, and they are often added to foods and beverages that are then marketed as weight loss friendly … which makes sense given that they are virtually calorie free.

However, despite increased use of these low-calorie sweeteners (and diet foods in general), the obesity epidemic has only gotten worse.

The evidence regarding artificial sweeteners is actually fairly mixed and the use of these substances is highly controversial.

So … what is the truth about artificial sweeteners? How do they affect appetite, body weight and our risk for obesity-related disease?

There Are Many Different Types of Artificial Sweeteners

There are numerous different artificial sweeteners available and the chemical structure varies between them.

What they all have in common, is that they are incredibly effective at stimulating the sweet taste receptors on the tongue.

In fact, most are hundreds of times sweeter than sugar, gram for gram.

Some of them (such as aspartame) do contain calories, but the total amount needed to provide a sweet flavor is so little that the calories you ingest are negligible (1).

Here is a table showing the most common artificial sweeteners, how sweet they are relative to sugar, and brand names they are sold under:

Then there are other low-calorie sweeteners that are processed from natural ingredients and therefore don’t count as “artificial.”

This includes the natural zero-calorie sweetener stevia, as well as sugar alcohols like xylitol, erythritol, sorbitol and mannitol. Sugar alcohols tend to have similar sweetness as sugar but less than half as many calories.

This article is strictly about the artificial sweeteners … but you can read about the natural ones here.

Bottom Line: There are many different types of artificial sweeteners. The most common ones are aspartame, sucralose, saccharin, neotame and acesulfame potassium

Sugar-sweetened foods trigger brain chemicals and hormones to be released, part of what is known as the “food reward” pathway (2, 3, 4, 5).

While artificial sweeteners provide sweet taste, many researchers believe that the lack of calories prevents complete activation of the food reward pathway.

This may be the reason artificial sweeteners are linked with increased appetite and cravings for sugary food in some studies (8).

Magnetic imaging in 5 men showed that sugar consumption decreased signalling in the hypothalamus, the appetite regulator of the brain (9).

This response was not seen with consumption of aspartame, suggesting that the brain does not register artificial sweeteners as having a satiating effect.

It may be that sweetness without the calories leads to further food seeking behavior, adding to your overall caloric intake.

But… there have also been studies where artificial sweeteners did not affect appetite or caloric intake from other foods (10, 11).

In a 6 month study of 200 individuals, replacing sugary drinks with either artificially sweetened drinks or water had no effect on food intake (12).

Bottom Line: Some researchers believe that artificial sweeteners do not satisfy our biological sugar cravings in the same manner as sugar, and could therefore lead to increased food intake. However, the evidence is mixed.

Another argument opposing artificial sweeteners is that the unnatural sweetness encourages sugar cravings and sugar dependence.

This idea is logical considering that flavor preferences in humans can be trained with repeated exposure (13).

For example, we know that reducing salt or fat for several weeks leads to a preference for lower levels of those nutrients (14, 15). Sweetness is no different.

While this is not proven, it does seem to make sense. The more we eat of sweet foods, the more we want them.

Bottom Line: The strong sweetness of artificial sweeteners may be causing us to become dependent on sweet flavor. This could increase our desire for sweet foods in general.

Many observational studies have been conducted on artificial sweeteners.

These kinds of studies take a group of people and ask them about various factors, such as what they eat.

Then many years later, they can see whether a particular variable (such as artificial sweetener use) was associated with either an increased or decreased risk of disease.

These types of studies don’t prove anything, but they can help us find patterns that warrant further investigation.

Several of these studies have paradoxically found that artificially sweetened drinks are linked to weight gain rather than weight loss (16).

However, the most recent review, which summarized the findings of 9 observational studies, found that artificial sweeteners were associated with a slightly higher BMI, but not with body weight or fat mass (17).

I should point out that this study was industry sponsored. It doesn’t mean that the results are invalid, just that we should be extra skeptical because the funding source of a study can often skew the results and the interpretation of the data (18).

That being said … correlation does not imply causation, so these studies don’t prove anything one way or the other.

Fortunately, the effects of artificial sweeteners on body weight have also been studied in numerous controlled trials (real science).

Bottom Line: Some observational studies have found artificial sweeteners to be linked with increased weight, but the evidence is mixed.

Many clinical trials have concluded that artificial sweeteners are favorable for weight control (19, 20, 21, 22).

One of the largest trials looked at 641 children aged 4-11 years who had to drink either 250 ml (8.5 ounces) of an artificially sweetened drink, or the same amount of a sugary drink every day for 18 months.

The children who were assigned the artificially sweetened drinks gained significantly less weight and less fat than the sugar-drinking children (19).

The most recent review of 15 clinical trials found that replacing sugary drinks with their artificially sweetened versions can result in modest weight loss of about 1.8 lbs (0.8 kg), on average (17).

So… according to the best available evidence, artificial sweeteners appear to be mildly effective for weight loss.

They certainly don’t seem to cause weight gain, at least not on average.

Bottom Line: Numerous controlled trials have studied the effects of artificial sweeteners on body weight. On average, replacing sugar-sweetened beverages with diet beverages may cause weight loss of about 2 pounds.

All of this being said, health is about way more than just weight.

There are some observational studies (again, studies that don’t prove anything) linking artificial sweetener consumption to metabolic disease.

This includes an increased risk of metabolic syndrome, type 2 diabetes and heart disease.

Sometimes the results are quite staggering… for example, one study found that diet soft drinks were linked to a 121% greater risk of type 2 diabetes (25).

Another study found that these beverages were linked to a 34 percent greater risk of metabolic syndrome (26).

This is supported by a recent high-profile study on artificial sweeteners, showing that they caused a disruption in the gut bacterial environment and induced glucose intolerance in both rats and humans (27).

It is known that the bacteria in the intestine (gut flora) are incredibly important for health (28, 29, 30).

Whether artificial sweeteners cause problems by disrupting the gut bacteria needs to be studied further, but it appears that there may be some cause for concern.

Replacing sugar with artificial sweeteners may be helpful in reducing body weight, but only very slightly at best.

Their intake certainly does not seem to cause weight gain, at least not in the short-term.

At the end of the day, artificial sweeteners are not “toxic” like some people make them out to be, but I’m not convinced that they’re perfectly safe either.

The research goes both ways … and the decision about using them must come down to the individual.

If you’re healthy, happy and satisfied with the results you’re getting and you happen to use artificial sweeteners… then there’s no need to change anything. If it ain’t broken, don’t fix it.

However … if you suffer from cravings, poor blood sugar control or any mysterious health problem, avoiding artificial sweeteners may be one of many things to consider.

Organic vs. Conventional: Find Out Which Eggs Are Healthiest to Eat