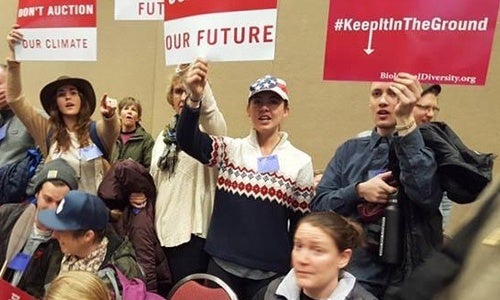 More than 100 climate activists disrupted the Bureau of Land Management’s oil and gas lease auction in Salt Lake City Tuesday, sending a powerful warning to the Obama administration that until the climate impacts of such sales are considered, the protests will not relent. 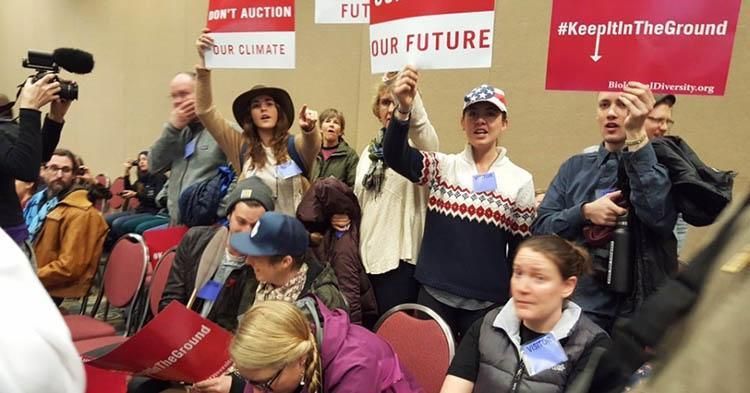 Activists calling for the federal government to keep fossil fuels “in the ground” were booted from an oil and gas lease auction in Salt Lake City on Tuesday. Photo credit: Taylor McKinnon / Center for Biological Diversity

“It’s simple,” Tim Ream, climate and energy campaign director for the activist group WildEarth Guardians, said. “The climate impacts of the federal oil and gas program have never been studied. We are going to keep on protesting every single oil and gas lease sale until Obama agrees to that study and puts a timeout on oil and gas just like he did for coal,” Ream added, referencing last month’s White House announcement.

At the so-called “climate auction,” industries were bidding on more than 45,000 acres of publicly owned oil and gas in Utah, which is estimated to hold as much as 1.87 million tons of potential greenhouse gas pollution.

A number of protesters waving mock bidder paddles—which were plastered with images of children, representing those who will be most impacted by climate change—were reportedly kicked out for singing, which temporarily disrupted the auction.

Others, including author and environmentalist Terry Tempest Williams, served as a witness while “our public lands, public commons being auctioned off now at $2.00 per acre,” as she wrote on Twitter Tuesday.

"Is it worth two dollars? No bid" Next parcel of scenery." auctioneer. "You all in – You all done?" #keepitinthefuckingground

My phone dying, if you want 2 witness the crime of America's lands being sold to the highest bidder sit here and b sick. #keepitintheground

Later, it was reported that Williams or Bidder 19, had “purchased” several oil and gas parcels in Grand County.

The demonstration is part of a growing “Keep It In the Ground” movement that is calling on leaders to heed the warnings from scientists and evidenced by an increasingly warmer planet, that we must immediately stop the burning of fossil fuels if we hope to stave off the worst impacts of climate change.

In a column on Tuesday, 350.org co-founder Bill McKibben lays out what he describes as “the numbers.”

“We have to keep 80 percent of the fossil-fuel reserves that we know about underground,” he writes. “If we don’t—if we dig up the coal and oil and gas and burn them—we will overwhelm the planet’s physical systems, heating the Earth far past the red lines drawn by scientists and governments. It’s not ‘we should do this’ or ‘we’d be wise to do this.’ Instead it’s simpler: ‘We have to do this.'”

In the U.S., activists have specifically said that ending federal fossil fuel leases on public lands and waters, which would have a significant impact on lowering carbon emissions, could be accomplished through a simple executive action by the president.

“When we become fully present to what is happening in the world, we see that the decisions we make today will impact those living far in the future,” said Kaitlin Butler, with the Women’s Congress for Future Generations, who took part in Tuesday’s action.

Butler said that the failure of the leasing program to recognize that “climate change is the predominant issue of our time” is a “misuse of science that fails to ensure clean air, unpolluted waters, biodiversity, human health—a habitable Earth.”

This spring, the climate movement is calling for an escalated mobilization.

“I don’t know if we’re going to win this fight in time,” McKibben writes. “But I do know we’re now fighting on every front. And the most important one is the simplest: We can and we must and we will keep that coal and gas and oil underground.”