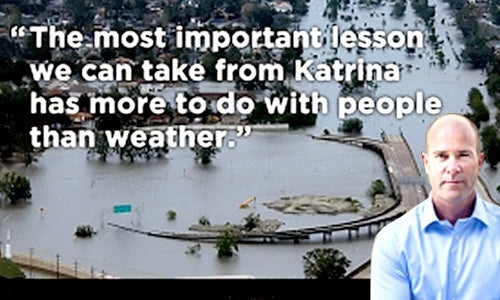 Hurricane Katrina killed more than 1,800 people, devastated a great American city and caused more than a hundred billion dollars of damage. An enormous natural disaster was amplified by governmental incompetence and indifference into a human tragedy that shocked the world. Today, a full decade later, aftershocks of Katrina are still being felt, particularly in New Orleans, which has never completely recovered. 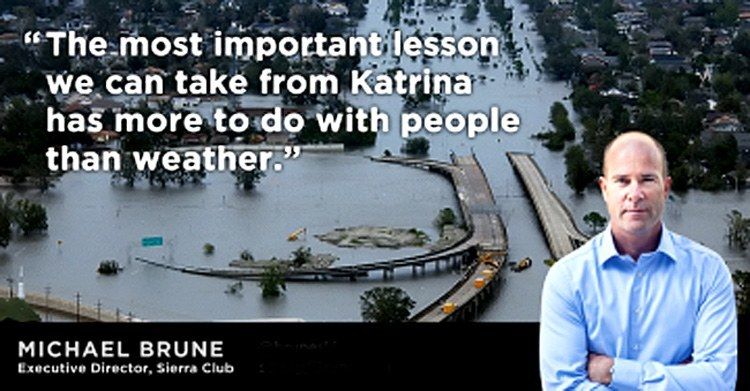 Although the events of 10 years ago were certainly momentous enough in and of themselves to warrant commemoration, Katrina is also a harbinger of our future. We know that climate disruption threatens to increase the frequency of extreme weather events, from droughts to heat waves to hurricanes. Extreme storm surges like those from Katrina and Superstorm Sandy will become 10 times more frequent, even if we succeed in limiting global temperature increase to 3.6 degrees Fahrenheit. That works out to a Katrina every other year.

But the most important lesson we can take from Katrina has more to do with people than weather. The storm itself was only partially responsible for the extensive damage and suffering in New Orleans. When the levees failed, it was because no one cared enough to ensure that they were properly engineered and constructed. When thousands of people found themselves caught in the storm’s path, it’s because no one cared enough to help them evacuate. Even after the storm had passed and survivors were sickened by the formaldehyde in FEMA trailers … well, you get the idea.

When it comes to disasters caused by climate disruption and extreme weather, there’s nothing fair about which people will end up being hurt the most. Low-income communities and communities of color are not only the first in the line of fire but also the last when it comes to getting help. In New Orleans, for Katrina, it was the Lower 9th Ward. In New York, for Sandy, it was the outer boroughs. But look almost anywhere and you’ll find people living in frontline communities that are both more vulnerable to disasters and less able to recover in the aftermath.

In fact, the same kind of injustice applies on a global scale—many of the poor and developing nations that have been the least responsible for climate disruption will nevertheless be the hardest hit by its effects.

That is why we cannot tackle climate disruption without also addressing climate justice. That means dismantling the racial and economic injustice that leaves some people, through no fault of their own, at much greater risk from the effects of climate disruption.

Although clean energy doesn’t guarantee climate justice, it’s a key ingredient. The beautiful thing about growing a clean-energy economy is that, when done right, it not only cuts the pollution that causes climate disruption but also leads to healthier, more prosperous and stronger communities. You can already see this happening in the Lower 9th Ward, where residents are five times as likely to have solar as elsewhere in New Orleans.

Climate justice will definitely be on my mind as Sierra Club President Aaron Mair and I join the 10th Annual Katrina Memorial March and Second Line this Saturday in New Orleans. Because although no one can prevent future storms like Katrina, there’s no excuse for forcing entire communities to suffer disproportionately from the consequences.