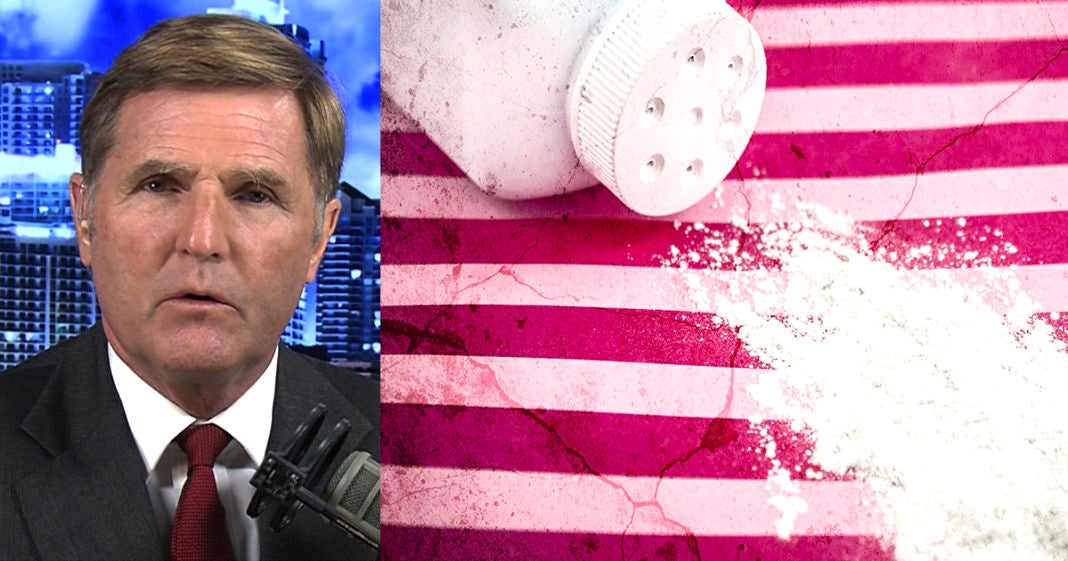 Baby powder is one of the most commonly-used household products in America—but could it be a major cause of ovarian cancer? Earlier this year, a jury in Missouri ordered Johnson and Johnson to fork over $72 million to the family of a woman who claimed to develop ovarian cancer after using its branded baby powder. Hundreds of other women are making the same claim.

Watch as Ring of Fire’s Mike Papantonio and Sam Seder discuss this issue:

Transcript from the video:

Seder: Pap, this week there was a huge award ordered by a state jury in Missouri against Johnson & Johnson for the company’s, I guess, knowledge that the talcum based baby powder in Shower to Shower that they were selling for years had the ability to cause cancer in some…

Papantonio: Yeah, Ovarian cancer. They said more than that, Sam. The attorney that handled this is a friend and he’s a great lawyer. Jere Beasley. The reason we’re involved in this case, the reason I’m handling this case also, is because I really want women to understand that why would you possibly take a risk of using this Shower to Shower or Johnson’s Baby Powder when there’s any risk of Ovarian cancer? The studies right now, actually as early as the 1980s, the studies started showing there’s a connection between the minerals that are found in this powder. Because it’s mined. It’s mined from the ground. This talcum is mined from the ground, but there’s minerals that cause inflammation in the organ systems. Anytime you have inflammation that sometimes leads to scar-based cancers and what’s happening Sam, is that they’re finding the minerals that they can trace back to the powder in the tumors that are found in these women.

The question then becomes … You had the International Journal of Gynecological Cancer come out just … They did a study and they said, “Look. A woman who uses this on a regular basis has a 30 to 60 percent increase of Ovarian cancer.” It’s not a … That’s not a coincidence. Harvard did a study. They said … It was even more compelling. They said a women doesn’t even have to use it regularly. She puts herself at risk every time she uses it, because once that talcum … Once the minerals from the talcum powder absorb into the body they then become an … They create an inflammatory process. The Journal of National Cancer Institute talked about the use of talc in Ovarian cancer in 2014. They weren’t equivocal about their findings.

The interesting thing about this case is that this is information that Johnson & Johnson knew since the 1980s. The documents in this case are … They’re awful when you start determining what did they know. That’s what the jury reacted to. This wasn’t just … The question, Sam, was not only were they negligent. They obviously were negligent. The question was also, “Did they show reckless disregard for human life?” and the jury came back and said, “Yeah, they did.” Sometimes if … Sam, if this were a medicine, if this were something that maybe was a life-saving medicine you had to take it, there’d be some risk-benefit analysis. There is risk-benefit analysis here. This is just absolutely no benefit.

Seder: My understanding is that there was a sense within Johnson & Johnson that they knew that these … The reporting of these links was going to drive down their sales and so they re-oriented who they were going to try and sell this to. My understanding is too is that they had been basically aware they were going to have to pay the piper at one point and have been preparing for this litigation in some way for maybe decades.

Papantonio: Yeah, they have. Matter of fact what they is they went out and hired what I call “biostitutes.” Those are … You find ’em at places like Yale and Princeton. They’re these scientists or these professor types that will say anything for the right amount of money. What they did is they went out and they phonied up some epidemiology. The epidemiology they tried to show that it’s impossible for this to cause Ovarian cancer even though you’re finding … You’re tracing the minerals right to the ovary. The problem is when you have a company like this that has this much head-start they get to change the epidemiology, because they secretly pay for the epidemiology to make it look like there’s no connection. That’s what they did here. That’s why Jere did such a wonderful job in this case. Actually working his way through that and showing that that’s a fraud. That you can go hire a “biostitute,” which is nothing more than a scientific whore, for the right money and they’re going to say whatever you want ’em to say. That’s what Johnson & Johnson did here in this case.

Seder: Pap, just tell us, in a case like this there are a lot of potential plaintiffs out there, so what happens next? You’ve had this … You have this award. I assume Johnson & Johnson tries to appeal. What … Walk us through what happens next.

Papantonio: What’s going to happen next is this. First of all you’re going to have lawyers that have virtually zero experience thinking, “I can go handle these cases.” They can’t. A guy like Beasley does the same thing we do. We specialize in these cases. This is what we do … (laughs). What ends up happening is very often you’ll have some lawyer go grab a bunch of these cases for people that need to have good representation and they’ll end up making bad law in jurisdictions. This is what my prediction is on this case. You’re going to … It’s going to be like the scene in Jaws where the characters in the little rowboats, “I’m going to go catch the big white shark,” but what ends up happening is they do so much harm to the project itself.

What I always try to tell people is know who you’re hiring on something like this, because it can go bad for a lot of women. A lot of women are suffering from Ovarian cancer directly related to this talc and so the question then becomes … You have to … Simply because somebody advertises and says, “I handle these cases,” you need to find out who they are, because I say that not just for … I say that, because they can upset the entire process and a lot of people can be left out in the dark, because some lawyer who knew … Had no clue on what they were doing tried to handle this case against Johnson & Johnson, blew it and made bad law that affects women all over the country. That the first thing I always talk about.

The second thing is that this case will continue … We’re going to continue … There’s going to be documents that keep showing up. The documents that Jere Beasley put in front of the jury are really bad. They showed really reckless disregard, terrible conduct by Johnson & Johnson and that’s why the jury came back like they did. My prediction is those documents will even get worse as this case goes forward.

Seder: Wow. Really just amazing. I have to say that in the 10, now gosh 12 years that I have known you and I hear these stories from you that you deal with on a day to day basis, when you find these documents in these corporations and I am … I still have the ability to be amazed at the callousness and just the sheer sense that these folks, because they’re making a dollar, owe nothing to the general public or their customers. It is shocking to me. Pap, it’s always a pleasure to talk to you. Thank you much.

Learn more about the relationship between Talcum Powder use and Ovarian Cancer.