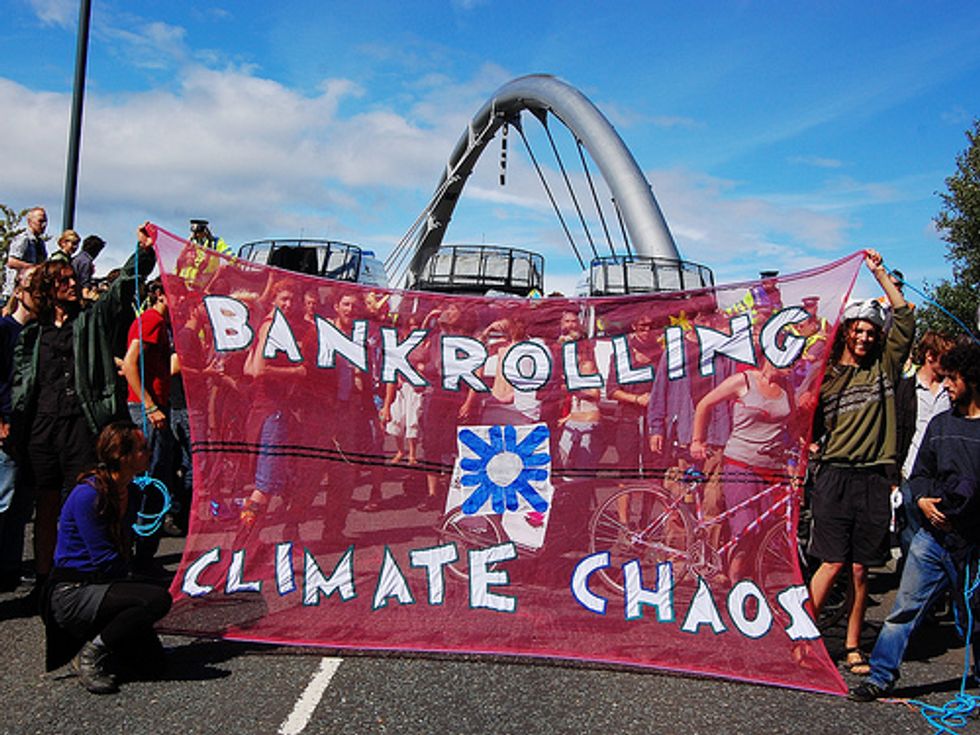 As world leaders gathered in Durban Nov. 30 to discuss solutions to global climate change, an international coalition of civil society and environmental organizations released a new study, Bankrolling Climate Change, highlighting the top 20 banks that finance the coal industry. The study examines commercial banks’ lending for the coal industry and provides the first comprehensive climate ranking for financial institutions. The study finds JPMorgan Chase, Citi and Bank of America to be the top three banks in the world financing climate change.

A full copy of the study with a ranking of all the researched banks can be downloaded here.

The organizations examined the portfolios of 93 of the world’s leading banks and looked into their support for 31 major coal-mining companies (representing 44 percent of global coal production) and 40 producers of coal-fired electricity (which together own more than 50 percent of global coal-fired generation capacity). The total value of coal financing provided by these banks since 2005 (the year the Kyoto Protocol came into force) amounts to 232 billion Euro (US $309 billion).

“We chose to look into coal financing as coal-fired power plants are the biggest source of man-made CO2 emissions and the major culprit in the drama of climate change,” explains Heffa Schuecking of urgewald. “In spite of the fact that climate change is already having severe impacts on the most vulnerable societies, there is an abundance of plans to build new coal-fired power plants. If banks provide money for these projects, they will wreck all attempts to limit global warming to 2° Celsius,” says Schuecking.

The study identifies the top twenty “climate killers” in the banking world. Among the top twenty are banks from the U.S., the United Kingdom, Germany, France, Switzerland, China, Italy and Japan. The top three banks fuelling climate change worldwide are JP Morgan Chase (US $22 billion), Citi (US $18.27 billion) and Bank of America (US $16.79 billion). In the past two years, BoA invested $4.3 billion in the U.S. coal industry, making them the top financer of coal in America.

“Providing underwriting for coal companies is risky business from a regulatory, financial and reputational perspective. Coal is a dirty, dangerous and increasingly outdated energy source," said Amanda Starbuck, director of the Energy and Finance program at Rainforest Action Network (RAN). “As the lead financier of the coal industry, JPMorgan, Citi and Bank of America short-term, reckless financing strategies are jeopardizing the health of our environment and our climate." RAN contributed research to the report and works with the international BankTrack alliance.

Coal-fired power plants are not cheap to build. Typically, a 600 Megawatt plant will cost around US $2 billion. Power producers therefore rely heavily on banks to provide and mobilize the necessary capital for coal plants. “Our figures clearly show that coal financing is on the rise,” notes Tristen Taylor of Earthlife Africa Johannesburg. “Between 2005 and 2010, coal financing almost doubled. If we don’t take banks to task now, coal financing will continue to grow,” he warns.

The study looks into the statements of the top climate killer banks and also examines their existing climate policies. “Interestingly, almost all of the top twenty climate killer banks in our ranking have made far-reaching statements regarding their commitment to combating climate change,” explains Yann Louvel of BankTrack. “However, the numbers show that their money is not where their mouth is.” He also notes that the policies many banks have adopted and the voluntary initiatives they have signed on to like the “Carbon Principles” or the “Climate Principles” have failed to make any difference in banks’ portfolios.

“Our study names and shames the banks that are destabilizing our climate system,” says Bobby Peek from groundWork. “Plans for new coal-fired power plants and coal mines are meeting with fierce resistance all over the world and we are going to begin turning that heat on the banks," explains Peek. The study calls on banks to become responsible climate actors and to quit coal. According to the NGOs, banks need to shift their portfolios to renewables and energy efficiency and set and implement ambitious CO2 reduction goals for their financed emissions.