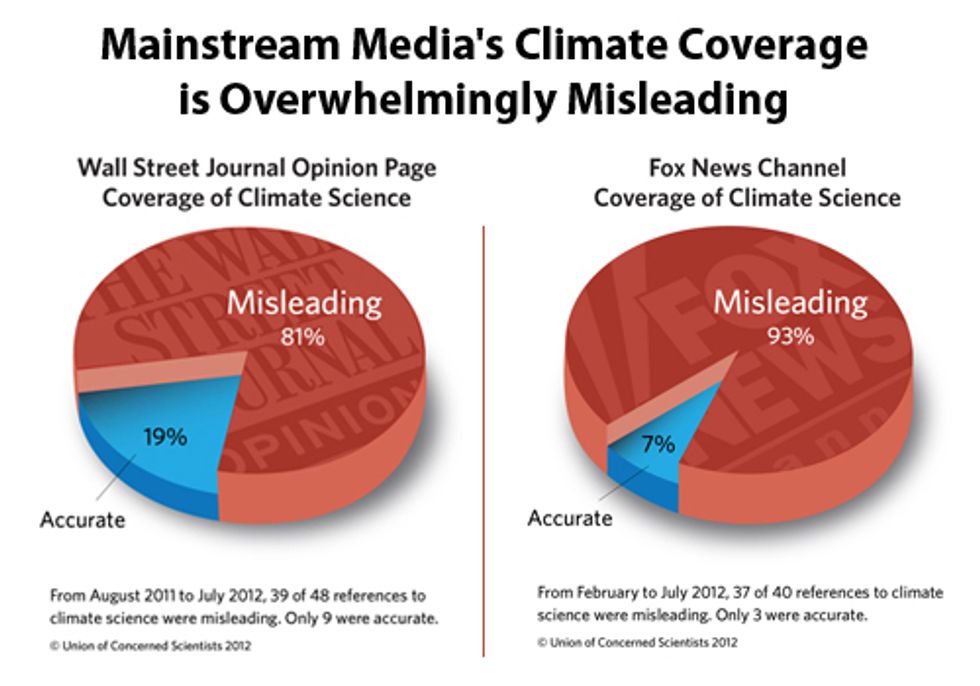 Such improvement has not been achieved. A 2012 snapshot analysis shows that recent coverage of climate science in both outlets has been overwhelmingly misleading.

The analysis finds that the misleading citations include broad dismissals of human-caused climate change, rejections of climate science as a body of knowledge and disparaging comments about individual scientists. Furthermore, much of this coverage denigrated climate science by either promoting distrust in scientists and scientific institutions or placing acceptance of climate change in an ideological, rather than fact-based, context.

Millions of Americans get information about climate science from the Fox News Channel. In 2011, it was the most popular cable news channel in the U.S. During prime time, a median of more than 1.9 million people watched it.

The Wall Street Journal has a broad readership and enjoys the largest circulation among American newspapers—more than 2 million daily readers. Within the Journal, the opinion section operates separately from the news section.

“The green energy stuff—I mean, that’s—that’s all a hoax and a fraud based on another hoax and fraud, global warming.” (Fox News Channel, 3/23/12)

“We are in the middle of what you might call a global warming bubble. It is a failure of the global warming theory itself and of the credibility of its advocates…” (Wall Street Journal column, 3/9/2012)

“The lack of any statistically significant warming for over a decade…” (Wall Street Journal op-ed, 5/27/12)

“I thought we were getting warmer. But in the ‘70s, it was, look out, we’re all going to freeze.” (Fox News Channel, 4/11/12)Coverage of Climate Action Also Overwhelmingly Negative